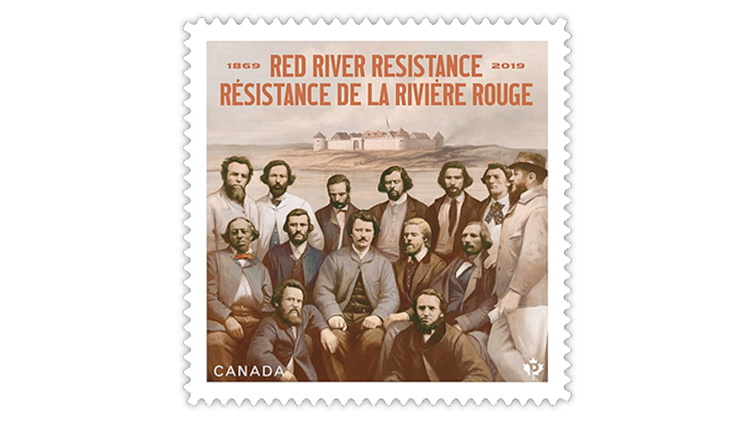 Canada Post commemorated the 150th anniversary of the Red River Resistance on this nondenominated permanent-rate booklet stamp issued Nov. 6. The stamp design is based on an 1848 lithograph of Fort Garry, where the Metis led by Louis Riel set up a provisional government, and an 1870 photograph of Riel and his provisional government councillors. 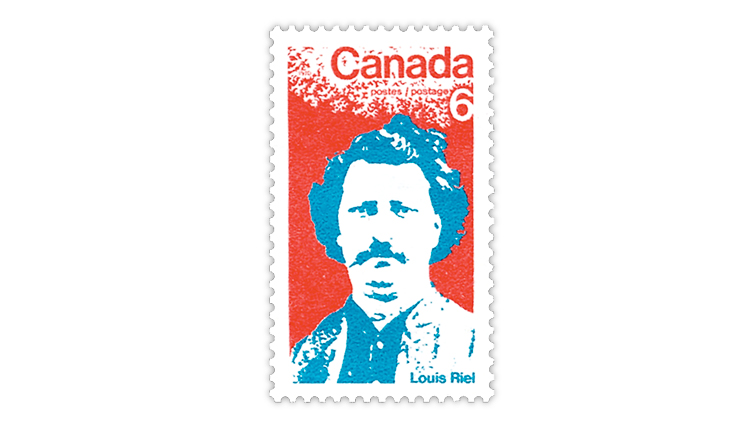 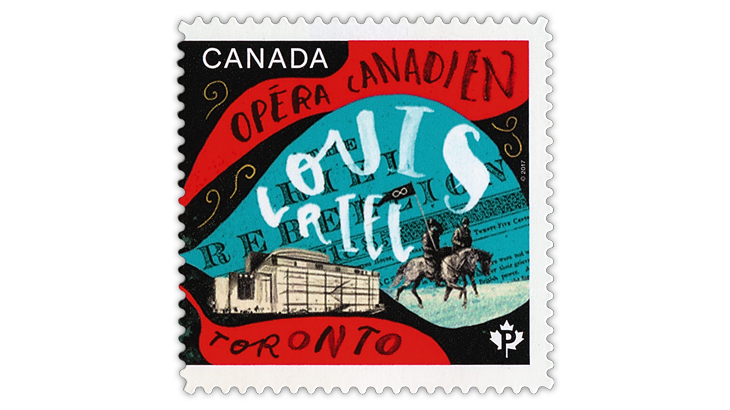 A stamp in the 2017 Canadian Operas set pays tribute to the 1967 opera Louis Riel.
Previous
Next

Canada Post commemorated the 150th anniversary of the Red River Resistance on a stamp issued Nov. 6.

In announcing the nondenominated permanent-rate (currently 90¢) stamp in its Details magazine for collectors, Canada Post said that the Red River Resistance of 1869-70 “asserted Metis rights during the turbulent events leading up to the creation of the province of Manitoba.”

The Manitoba Metis Federation, the democratic and self-governing political representative for the Metis Nation’s Manitoba, defines the Metis as “a people of North American Indian and European ancestry who coalesced into a distinct nation in the northwest in the late 18th century.”

The Red River Resistance, also known as the Red River Rebellion, began after the Canadian government purchased a vast amount of western and northern lands from the Hudson Bay Co. in March 1869 without consulting the Metis and First Nations people who lived there.

The Metis of the Red River Settlement stopped federal surveyors in October of that year, and in November a group of armed Metis under the leadership of Louis Riel (1844-85) seized Fort Garry. The fort, also called Upper Fort Garry, had served as the center of government and trade for the region.

The Metis next formed a provisional government “to negotiate the territory’s entry into Confederation,” according to Canada Post.

“Political and armed efforts to resolve the standoff continued over the winter,” Canada Post said. “In the spring, a delegation travelled to Ottawa to negotiate, insisting that the federal government recognize the Metis people and their land and cultural rights. This ‘Bill of Rights’ formed the basis of the resulting Manitoba Act, which brought the first western province into Confederation on July 15, 1870.”

The commemorative stamp was unveiled Nov. 6 next to the gate of Fort Garry in Winnipeg, Manitoba.

Shown in the background is Fort Garry from an 1848 lithograph by Henry James Warre, according to Canada Post. The image in the foreground is based on a photograph taken in 1870 of Riel and his provisional government.

The stamp, which measures 38 millimeters by 38 mm, was designed by Paprika and illustrated by Gerard DuBois. Canada Post also said that it worked closely with the Metis National Council in developing the stamp.

Lowe-Martin printed the commemorative by five-color lithography in booklets of 10 (Canada Post product no. 414120111). A total of 130,000 booklets were printed.

Canada Post had 7,000 official first-day covers (414120131) canceled in Winnipeg. Canada Post describes the cancel’s design as “a mark inspired by the infinity symbol that holds special significance to the Metis people.”

The allover cachet on the FDC depicts the fort from the aforementioned 1848 lithograph. The cachet also lists the names of Riel and 13 other members of the provisional government.

This is not the first time that Canada Post has honored Riel, a man who has been called both a hero and a traitor. He previously was commemorated on a 6¢ stamp in 1970 (Scott 515). Also, a permanent-rate stamp in the 2017 Canadian Opera set of five honors the 1967 opera Louis Riel (2975).

An article by George F.G. Stanley on the Canadian Encyclopedia website summarized his life: “Riel led two popular Metis governments, was central in bringing Manitoba into Confederation, and was executed for high treason for his role in the 1885 resistance to Canadian encroachment on Metis lands. Riel was initially dismissed as a rebel by Canadian historians, although many now sympathize with Riel as a Metis leader who fought to protect his people from the Canadian government.”