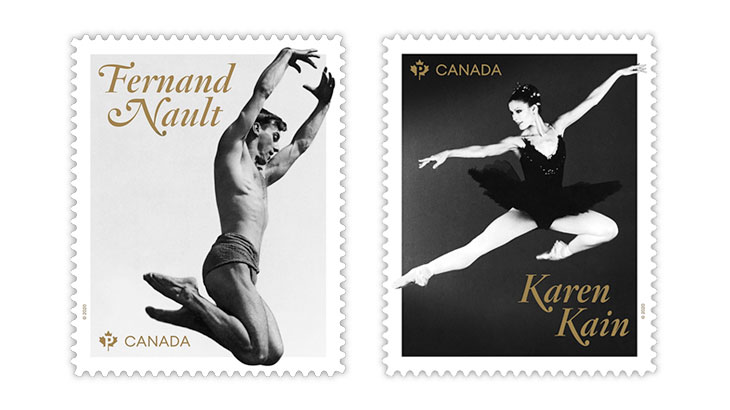 The two Legends of Canadian Ballet stamps honor Karen Kain and Fernand Nault and were issued in separate self-adhesive booklets of six stamps and a moisture-activated souvenir sheet of two.

This stamp issue was originally scheduled for the 2020 stamp program but was postponed. The stamps have a 2020 copyright date in the publicity images, which means the stamps could have been produced last year, too.

“Canadian ballet dancers are revered the world over — and beloved here at home, which is why we’re celebrating the careers of two of our country’s ballet legends,” said Canada Post stamp services director Jim Phillips.

Kain was born in 1951 in Hamilton, Ontario. She is currently the artistic director of the National Ballet of Canada.

“Recognized as one of the most gifted classical dancers of her era, Karen Kain joined The National Ballet of Canada in 1969,” according to Canada Post’s April 29 press release about the new stamps. “She was promoted to Principal Dancer in 1971 after her debut as the Swan Queen in Swan Lake and went on to perform many of ballet’s greatest roles over her illustrious career.”

Nault (1920-2006), born Fernand Noel Boissonneault in Montreal, Quebec, “was a prominent dancer and choreographer who is credited with raising the Grands Ballets Canadiens (now Grands Ballets Canadiens de Montreal) to international status,” according to Canada Post. “After studying with master dancers in New York, London and Paris, Nault replaced an injured dancer of the visiting American Ballet Theatre in Montreal in 1944. He remained with the company until 1965, when he joined the Grands Ballets as co-artistic director and resident choreographer.”

This isn’t the first Canada stamp issue to honor ballet. In 1989 Canada Post issued a block of four stamps (Scott 1252-1255) for the performing arts. One of those stamps (1252) shows a paper sculpture of two dancers, one of which is a ballerina. That 38¢ stamp also commemorates the 50th anniversary of the Royal Winnipeg Ballet.

The Legends of Canadian Ballet stamps were designed by Stephane Huot of Colour Innovations, using a photograph of Nault from Bibliotheque de la danse Vincent-Warren courtesy of Nault estate and a photograph of Kain by Andrew Oxenham.

The self-adhesive stamps are 32 millimeters by 40mm. The souvenir sheet measures 123mm by 90mm.

A total of 70,000 souvenir sheets were produced by five-color lithography.

Canada Post created 7,000 each of first-day covers canceled in Hamilton, Ontario, for Kain and Montreal, Quebec, for Nault. Each FDC has an overall cachet design featuring a photograph of the dancer. The photos differ from those on the stamps.