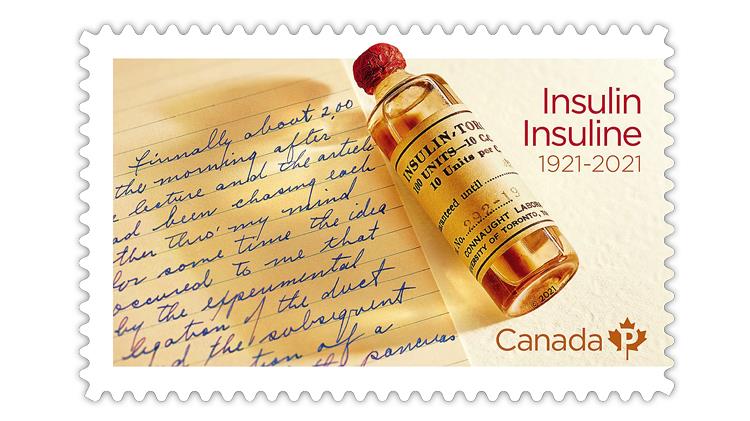 Canada Post issued a stamp April 15 to honor the 100th anniversary of the discovery of insulin by Frederick Banting, Charles Best, James Collip and John Macleod. The stamp shows an early insulin vial and an excerpt from an unpublished memoir by Banting. 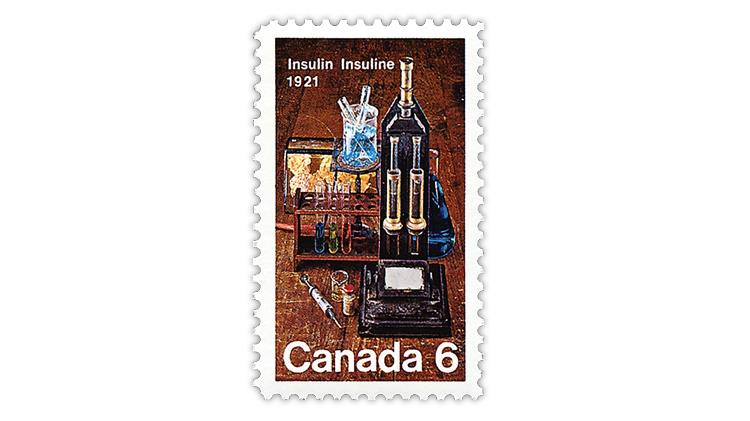 A 1971 6¢ stamp commemorates the 50th anniversary of the discovery of insulin and shows lab equipment used in that medical breakthrough. 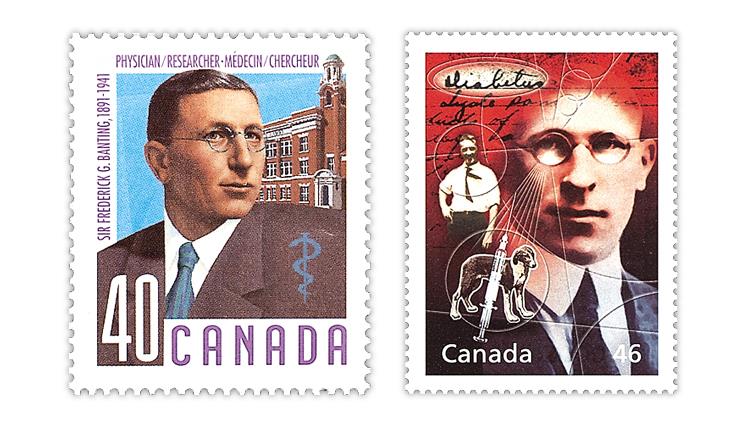 Dr. Frederick Banting was honored for his role in discovering insulin on Canadian stamps issued in 1991 and 2000. The former stamp is part of a set featuring physicians, and the latter is part of Canada Post’s Millennium series.
Previous
Next

Canada Post commemorates the 100th anniversary of the discovery of insulin on a nondenominated permanent-rate (currently 92¢) stamp issued April 15.

In Details, Canada Post’s magazine for collectors, Jim Phillips, the director of stamp services, said: “The centennial of one of Canada’s most important medical discoveries is celebrated for the life-changing impact it has had on people with diabetes around the world.”

The new stamp shows a vial of insulin and an excerpt of an unpublished memoir by Dr. Frederick Banting (1891-1941). Canada Post said that the excerpt “reflects the very moment he conceived the idea that set in motion events leading to the discovery of insulin.”

That discovery in 1921 at the University of Toronto and the first successful use of insulin in a human in early 1922 at Toronto General Hospital was a team effort with “surgical approach of Dr. Banting, the critical input of research assistant Charles Best and visiting biochemist James Collip, and the advice, guidance and oversight of John Macleod, chair of the Physiology Department” according to Canada Post.

Banting and Macleod received the 1923 Nobel Prize in physiology or medicine for the discovery. Banting shared his award money with Best, and Macleod shared his with Collip.

The website of the Nobel Prize summed up the work that led to the prize: “Diabetes is the body’s inability to metabolize sugar correctly. Doctors realized that diabetes is caused by a lack of insulin, which is formed in parts of the pancreas, but could not prove it. Frederick Banting suspected that another substance formed in the pancreas, trypsin, broke down the insulin. In John Mac-Leod’s laboratory in 1921, Frederick Banting and Charles Best treated dogs so that they no longer produced trypsin. Insulin could then be extracted and used to treat diabetes.”

The first person to receive insulin injections was 14-year-old Leonard Thompson (1908-35) in January 1922. Thompson weighed only 65 pounds and was in critical condition. At the time, people with Type 1 diabetes (formerly called juvenile diabetes) were only expected to live a few years at most, and the treatment used to extend their lives was a starvation diet.

Canada Post said: “Although Leonard had an adverse reaction to the initial formula, a second round of injections — administered after further refinements — saved his life. From these early trials came the medical breakthrough now known as insulin. The diagnosis of diabetes was no longer considered a death sentence.”

Previous Canadian stamps commemorate Banting and the discovery of insulin.

The first, a 6¢ stamp issued May 3, 1971, marked the 50th anniversary of the discovery (Scott 533). The design shows laboratory equipment used in the discovery.

The stamp is 40 millimeters by 25mm. Lowe-Martin printed it by six-color lithography in booklets of 10. A total of 130,000 booklets (1.3 million stamps) were printed.