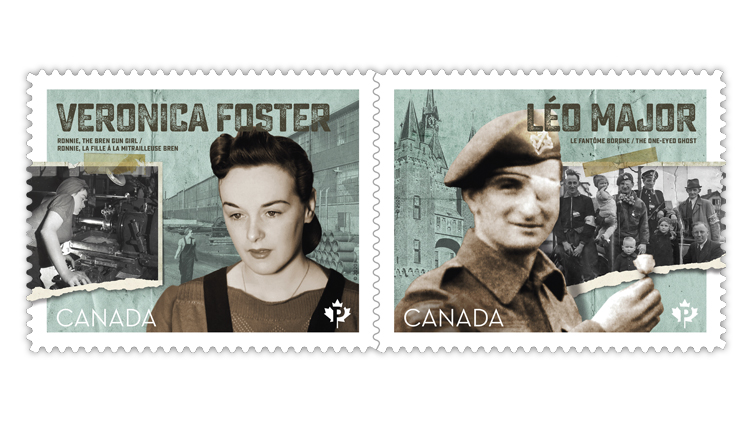 Canada Post is issuing two stamps April 29 to mark the 75th anniversary of Victory in Europe Day, celebrated May 8, 1945, after Nazi Germany surrendered to the Allied forces, ending World War II in Europe.

According to Canada Post, these two nondenominated permanent rate (currently 92¢) stamps “tell the stories of Private Leo Major, who fought to liberate the Netherlands, and factory worker Veronica Foster, who helped recruit women to the wartime workforce. Together, they represent the more than two million Canadian men and women who played a key role in the Allied victory.”

The two stamps are se-tenant (side-by-side) in booklets of 10.

The stamp featuring Foster is inscribed “Ronnie, the Bren Gun Girl” in English and French.

Foster received this nickname after the National Film Board of Canada took photographs of her working on the assembly line, producing Bren light machine guns at the John Inglis Co. factory in Toronto, Ontario.

These and other photos of Foster appeared on propaganda posters encouraging women to work in factories to support the war effort.

In an article for Canada’s national online encyclopedia, Katrine Raymond wrote: “Foster’s whole family worked hard to contribute to the war effort. While she worked at the John Inglis factory, three of her brothers enlisted to fight in the war. Foster represented patriotic ideals to the Canadian public, encouraging others to fulfill their patriotic duty by entering the workforce. Foster’s image captured the imagination of the public, and she became popular among Canadians.”

Also some believe that Foster was the inspiration for the American icon Rosie the Riveter, according to Canada Post.

The stamp design includes three photographs: one of Foster, one of her working on the assembly line, and one picturing her walking by the factory building in Toronto.

The stamp honoring Major includes one of his nicknames, “The One-Eyed Ghost.” It was also the title of a French-language documentary about him.

Before that documentary aired in 2018, little was known about Major in Canada, but he has been remembered and celebrated in the Netherlands’ town of Zwolle since 1945.

In his obituary for the news agency the Canadian Press, Jessica Murphy wrote: “In 1940, at 19, the French-Canadian from a tough Montreal neighbourhood joined Le Regiment de la Chaudiere.

“After losing an eye to a grenade on D-Day on the beach in Normandy, he refused a medical evacuation. He claimed he could still sight a rifle with one eye.

“But it was his bravery on a cold, rainy April night in 1945 that won him his first medal and the lasting respect of the people of Zwolle.”

On the night of April 13, 1945, Major and another French-Canadian sniper, Willy Arsenault, entered Zwolle on a reconnaissance mission. Arsenault was shot and killed by a German patrol, but Major continued the mission. In its Details magazine for collectors, Canada Post said: “Enraged by the fatal shooting of his comrade just hours into the mission, Major took up Arsenault’s weapons and charged the town alone — running through the streets with ‘a burst of fire, a couple of grenades and a lot of loud noise.’ He created the impression of a full-fledged attack, capturing dozens of prisoners and later setting fire to the local Gestapo headquarters. The ruse worked, and the Germans fled.”

Major was awarded a Distinguished Conduct medal for his action. He received a second medal for bravery during the Korean War.

He also was nominated to receive the Distinguished Conduct medal for capturing 93 German soldiers in 1944, but he refused it.

In Zwolle, a street is named after him, and he is remembered in its annual Liberation Day events.

Major has a brief connection to the United States, because he was born in New Bedford, Mass., to French-Canadian parents. The family returned to Montreal before his first birthday.

Shown in the foreground of the stamp is a photograph of Major holding a flower. Sassenport, the 15th-century stone gates of Zwolle, are pictured in the background. The third photograph on the stamp shows Major shortly after the liberation of that city.

Canadian stamps and related items are available from the Canada Post website. Stamps and FDCs are available by mail order from Canada Post Customer Service, Box 90022, 2701 Riverside Drive, Ottawa, ON K1V 1J8 Canada; or by telephone from the United States or Canada at 800-565-4362, and from other countries at 902-863-6550.