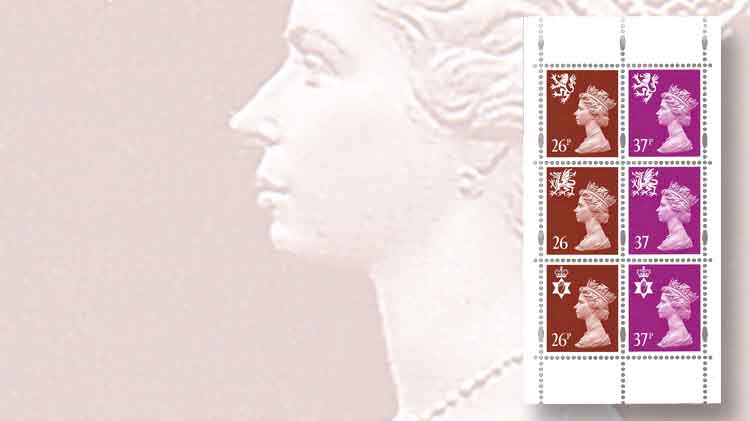 Machins for use in the various regions of Great Britain were introduced in 1971, featuring a regional symbol in the upper-left corner. They were issued together in a 1997 booklet pane (Scott NIMH81a). From top to bottom are stamps for Scotland, Wales, and Northern Ireland.

This is the second in a series of columns on the Machin definitives, which were introduced 50 years ago, on June 5, 1967. The first column was published on Linns.com April 21.

Since 1958, definitive stamps have been designed specifically for use in some of the regions of Great Britain: Scotland, Wales, Northern Ireland, and the Isle of Man.

When decimalization occurred in 1971, special Machins designed by Jeffery Matthews were issued for those regions (which are called countries in Great Britain).

The regional Machins had a smaller portrait of the queen and a regional symbol in the upper-left corner.

Generally, four of the most commonly used denominations were issued for the regions. The colors were the same as the standard Machins of the same denomination, though sometimes there was a difference in shade.

Regionals for the Isle of Man were discontinued in 1973 when it established its own postal service.

The currency indictor was removed from Welsh regionals in 1997 to conform to the Welsh Language Act. The alternative would have been to include two symbols, one for English and the other for Welsh.

Machin regionals for Scotland and Wales were replaced by pictorial designs in 1999, and those for Northern Ireland were similarly replaced in 2001.

Larry Rosenblum offers a full story on the 50th anniversary of the fascinating Machin stamps, featuring an in-depth look at the varieties that the classic design has yielded during its remarkable run. Subscribe to Linn’s Stamp News to read all about it!