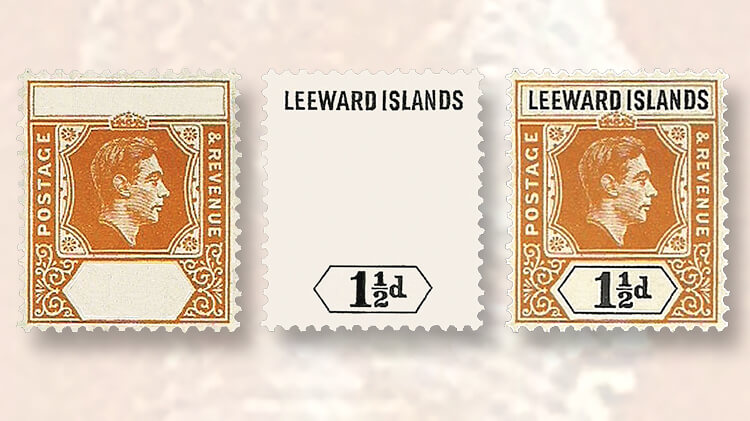 Are you familiar with key-type stamps? Do you know why they were used extensively in the British Commonwealth? Even if you know the answers to these questions, you will find much to enjoy in Fred Baumann’s delightful Spotlight on Philately column in the O

Are you ready for another edition of Linn’s Stamp News monthly magazine? We sure hope so, because the Oct. 16 issue is jam-packed with a marvelous assortment of in-depth, scholarly features that are sure to please. The presses are humming to get this thick 108-page issue ready for mailing Monday, Oct. 2. If you subscribe to Linn’s digitial edition, you’re at the head of the line because you get early access Saturday, Sept. 30. To heighten your anticipation a wee bit more, we offer three glimpses of what lies between the pages. Happy collecting!

In Spotlight on Philately, Fred Baumann — with eager assistance from two avid, dedicated collectors — takes us on an extended voyage to the Leeward Islands, where we encounter the King George VI key-type stamps. As it turns out, there are myriad subtle printing varieties beyond the basic stamps. A few are highlighted in Baumann’s column with crisp, enlarged photos. You won’t want to miss this fascinating feature.

After a decade of postal reform efforts, Denmark issued its first postage in 1851

Sergio Sismondo, in Unveiling Classic Stamps, unpacks the critical events behind this important advance in Denmark’s colorful philatelic history. Postal reform was sorely needed because there were literally thousands of rates for different classes of mail. “With 150 principal post offices, it meant that 22,500 rates had to be fixed and printed just for first-class letters,” Sismondo writes. Read the entire column — you won’t be disappointed.

A year late but a lovely issue: Rhodes’ Holy Year set of 1935

In this month’s installment of Classic Stamps of the World, Kathleen Wunderly casts her discerning eye over the 1935 Holy Year set from Rhodes, an Italian possession in the Dodecanese Islands of the Aegean Sea. The eight stamps actually commemorate the 1933-34 Holy Year that Pope Pius XI proclaimed as an “extraordinary jubilee” on Christmas Eve 1932. As with all of Wunderly’s columns, you’ll come away having learned some great history and with an appreciation for some beautiful stamps.