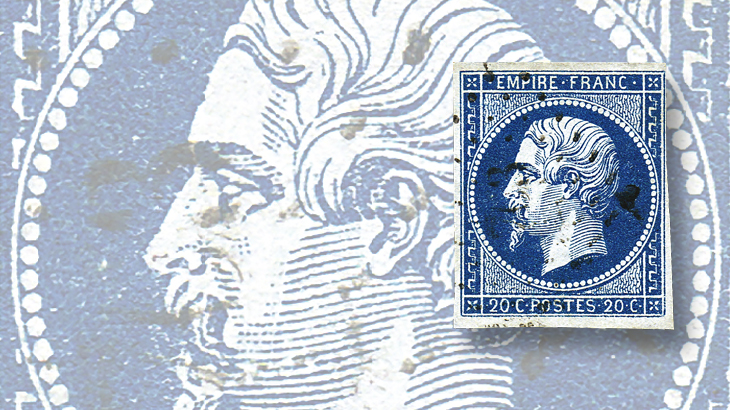 After Napoleon turned France into an empire and named himself emperor, the text at the top of the stamps was changed to “EMPIRE FRANC.” 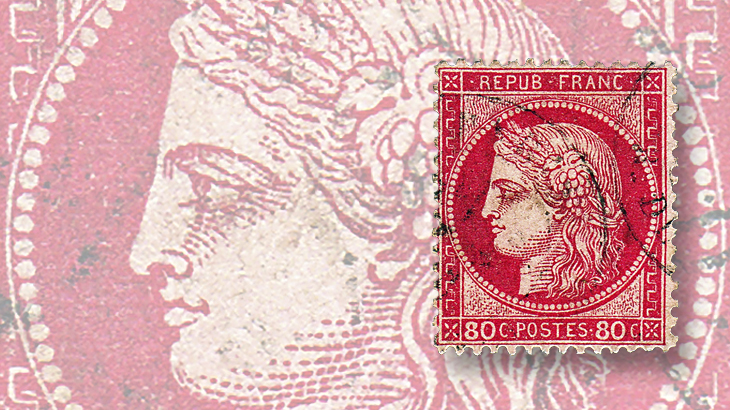 After Germany defeated France in the Franco-Prussian war, the Third Republic was formed. Ceres was returned as the central figure on French stamps, but the laurel wreath was kept. 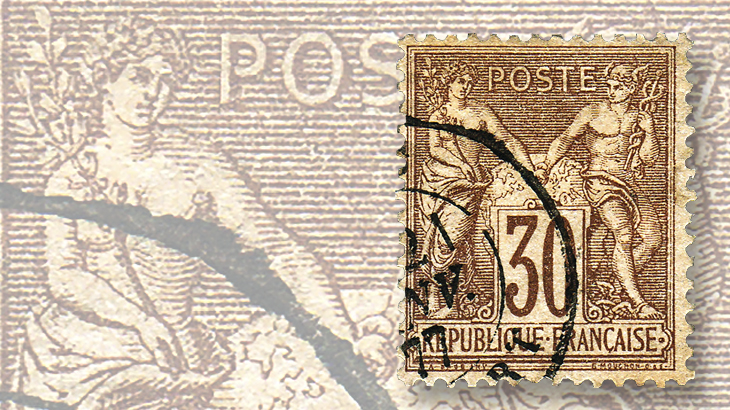 In 1875, France introduced the Sage design, named after designer Jules-August Sage. It features Peace and Commerce united over the globe, with the denomination in a central tablet. 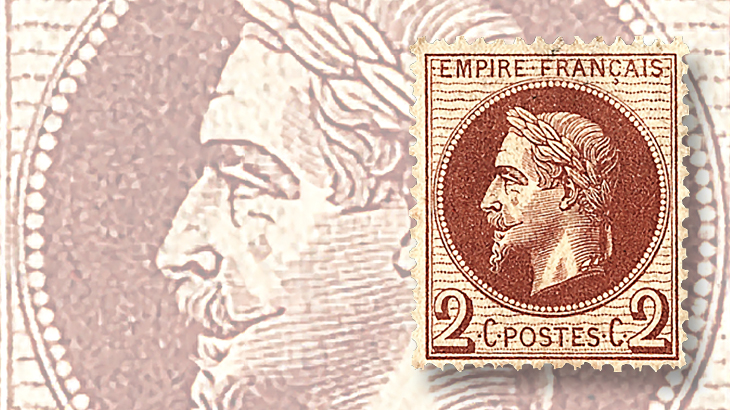 Starting in 1863, a laurel wreath was added to Napoleon’s head on the stamps of France to commemorate his military victories. 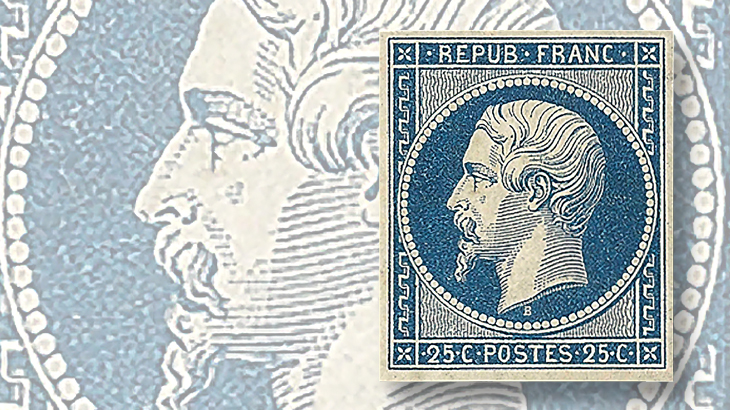 After President Louis Napoleon consolidated power, his portrait replaced that of Ceres on French stamps, starting in 1852. 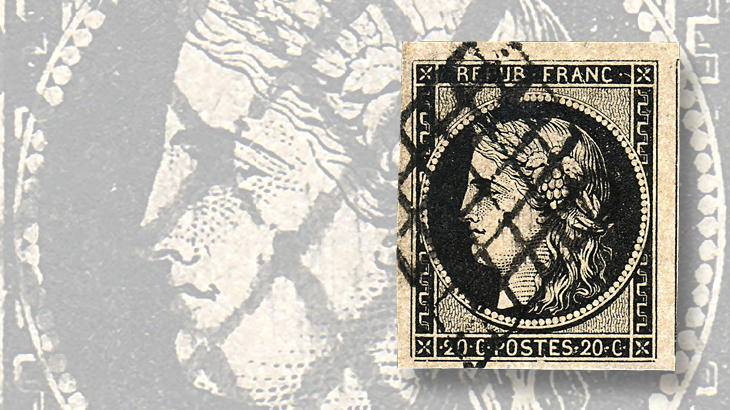 The first French stamps, issued in 1849, depict Ceres, the Roman goddess of agriculture, wearing a garland of wheat and a bunch of grapes in her hair. It was the period of the Second Republic, as indicated by the “REPUB FRANC” text at the top.
Previous
Next

The stamps of France reflect the dichotomy of French history. The French have been innovators in the arts and sciences, and people around the world enjoy the results of French creativity in food, wine, and fashion.

Yet in modern times, the French polity has been in a near-constant state of turmoil until recently. After centuries of tit-for-tat with the English, the French government remained unsettled from the beginning of the French Revolution in 1789 until the founding of the Fifth Republic in 1958.

Nineteenth and early 20th-century French stamps reflect the political upheavals, but it wasn’t until the 1930s when French stamps began to display France’s culture and achievements, with the exception of a 1923 series that honored scientist Louis Pasteur.

The first French stamps were issued in 1849, in the midst of a particularly tumultuous period. In 1848, the French people overthrew King Louis-Philippe, who had reigned since 1830, and established the Second Republic. In December of that year, Charles Louis Napoleon Bonaparte, a nephew of Napoleon Bonaparte, was elected president.

The National Assembly of the Second Republic enacted postal reform with reduced postal rates and specified the creation of postage stamps to indicate the prepayment of postage.

The first stamps were issued by France Jan. 1, 1849, featuring the effigy of Ceres, Roman goddess of agriculture, wearing a garland of wheat and a bunch of grapes in her hair.

The design was chosen to avoid any reference to the republic or the recent revolution. The identifier “REPUB FRANC” appears at the top.

During the first few years of the Republic, serious disputes arose between President Napoleon and the Assembly. In late 1851, Napoleon staged a coup d’etat and dissolved the National Assembly.

After a sham election, he became president for 10 years with the ability to be re-elected for life. The new supportive Assembly soon passed a law that the image on coins and stamps should be Napoleon.

Even this autocratic republic would not last. Napoleon claimed that France needed to be an empire to continue its own development.

After another one-sided referendum, the Second Republic was replaced with the Second French Empire. Napoleon now titled himself Napoleon III, Emperor of the French.

French stamps were changed again in 1853, with the inscription “EMPIRE FRANC” appearing above the portrait of Napoleon. A further design change was made in 1863 when a laurel wreath was added to Napoleon’s head to glorify his military victories. This is known as the Laureated issue.

Ongoing tension with Germany finally led to the Franco-Prussian war in 1870. Napoleon III surrendered himself to the Germans in September 1870, and the Third Republic was declared a few days later.

The war continued, and the Germans laid siege to Paris. Stamps were needed for areas outside Paris, so a new issue was prepared in Bordeaux, a city in southwest France. The head of Ceres replaced that of Napoleon, but the laurel wreath was kept. The inscription returned to “REPUB FRANC.”

The French ultimately lost the war and were forced to pay reparations to Germany as well as retire the war debt. The Third Republic survived five turbulent years, and a new constitution and an election in 1876 confirmed the republic and set up a new legislature.

A new series of stamps was ordered in 1875. Several possible reasons for this have been offered. One possibility is that France wanted to celebrate paying off its debt to Germany and celebrate the “new France.” Another was that at the time monarchists were at the head of the government, and the Ceres design reminded them of French and other revolutions that had overthrown kings and emperors.

A third, more mundane reason was that the General Postal Union (later the Universal Postal Union) had been formed in 1874, and there was a desire to have stamps in which the denomination was more distinct and the design less liable to forgery.

Whatever the reason, the post office held a competition for a new design without political significance. The winner was Jules-August Sage. His design pictures Peace and Commerce (the latter represented by the god Mercury) united hand in hand over the globe. It is known as the Sage design.

The Sage series continued in use until the beginning of the 20th century, when stamp designs became more diverse.