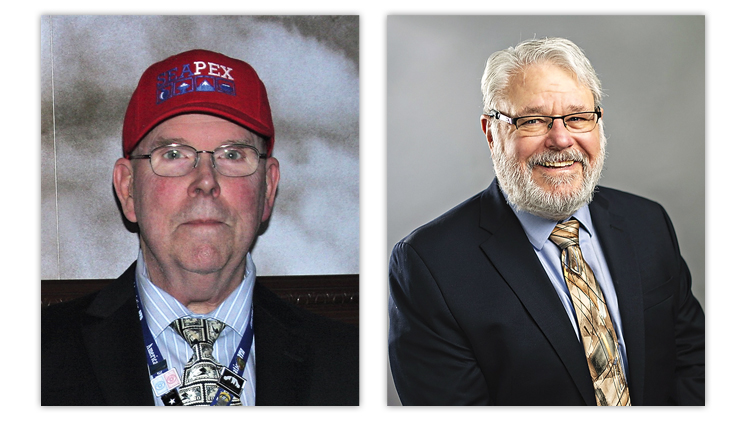 In recognition of their outstanding contributions to topical philately, the American Topical Association has selected Jack R. Congrove and Wayne L. Youngblood as Distinguished Topical Philatelists for 2020.

Jack R. Congrove and Wayne L. Youngblood have been selected as the American Topical Association’s Distinguished Topical Philatelists for 2020. The ATA’s highest award recognizes individuals who have made outstanding contributions to philately, especially topical philately.

Congrove’s award was presented shortly before his death on April 8.

An accomplished writer and editor, Congrove was co-editor of Topical Adventures — A Guide to Topical and Thematic Stamp Collecting, which will be published this summer.

He was co-chairman of the 2015 National Topical Stamp Show in Portland, Ore. He also edited the Federated Philatelist, the journal of the Northwest Federation of Stamp Clubs.

Youngblood is one of the most recognized leaders in philately today. He has served as editor of Topical Time, the ATA’s official journal, for the past 10 years. He also edits the American Stamp Collector & Dealer, the Collectors Club Philatelist, Duck Tracks and the Confederate Philatelist.

Youngblood served five terms on the American Philatelic Society’s board of directors and has taught classes at APS Summer Seminar for more than 30 years.

In 2018 he received the APS Luff award for outstanding service to the APS. He has been inducted to the halls of fame of the APS Writer’s Unit 30 and the Wisconsin Federation of Stamp Clubs.

Youngblood is a regular columnist for Linn’s Stamp News, the American Philatelist and the Philatelic Exporter. He has written 10 books and thousands of articles for various philatelic publications.

He began his professional involvement with the hobby as a member of the Linn’s editorial staff. He also served as editor of Scott Stamp Monthly and editor-publisher of Stamp Collector. He also was vice president of Regency-Superior Auctions.