Cost to collect stamps of the world for 2016 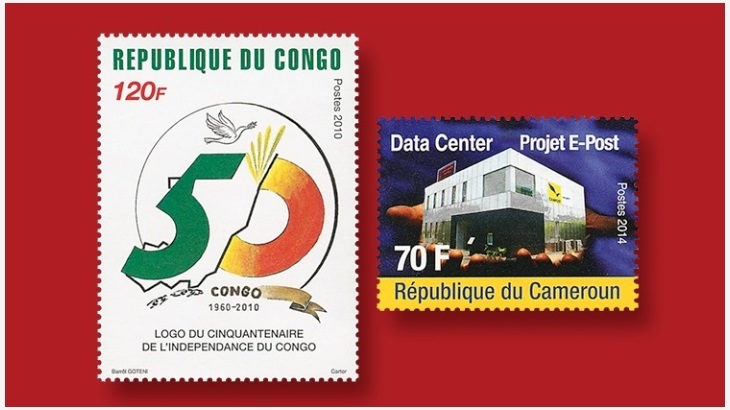 Congo Republic Scott 1286 and Cameroun 977 are two of the older stamps that collectors have shown to Scott catalog editors recently and were assigned catalog listings.

From the Editors — By Martin J. Frankevicz

It is time once more to look at the costs to obtain the new issues created by the various foreign stamp-issuing entities listed in the Scott catalogs as yet another year of new issues has been crammed into the six volumes.

The Linn’s Stamp News website has online charts compiling the number of major listings, their face value and their catalog value at the time of listing for the various stamp-issuing entities for the years 2002-2015. We have updated these files and added the chart for 2016.

These charts can be found by clicking here.

The NOTES column contains explanations and limitations for information shown. In this column, we track items that we did not assign catalog values to when listed, do not include in the totals, and that have dates of issue that we are not certain about. Boxes that are shaded have information that we believe is complete for the year. The totals shown include stamps listed as of Dec. 11, 2017, which comprise stamps that appear in the January 2018 Scott New Listings Update.

As already noted, we are still compiling this information for even the earlier lists, because every so often, we do list a stamp issue that has eluded us for many years.

Obtaining all of the new stamp issues has always been a challenge. While we obtain most of the stamps we list from new-issue dealers and countries with which we have standing orders, there are some countries that are real problems.

With the huge number of different stamps being produced every year by the various stamp-issuing entities, it is difficult for new-issue dealers to keep up with all of it.

Because we need to see actual examples of stamps in order to list them, we know that there are some stamps that have been reported elsewhere that we haven’t seen. There are still dozens of footnotes in the catalog asking to see examples of such difficult-to-obtain items. Some of those footnotes have been there for quite some time, which points directly to how imperfect the system of distributing new issues is, as well as to how scarce some of those items may be. Whenever the countries and new-issue dealers can’t provide us with these stamps, we have hope that our readers will show us those elusive items. Seldom is there an update that doesn’t have at least a few straggler items that have been lent to us by a collector. We thank everyone who has contributed to the cause of making the catalogs a more complete work.