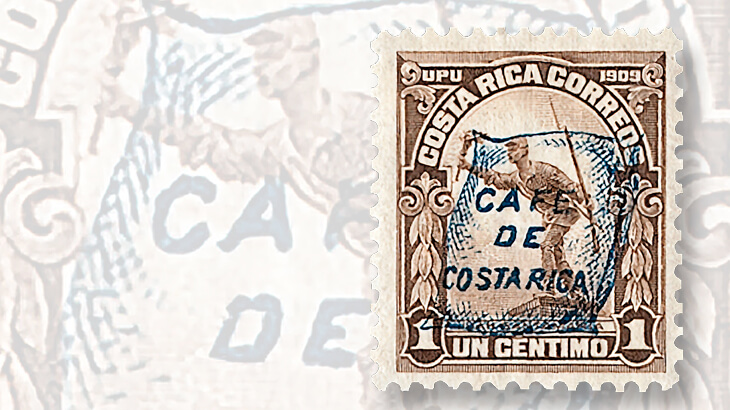 To promote the country’s coffee, an overprint of a coffee bag was added, in various ink colors, to five denominations of existing Costa Rica issues in 1922. 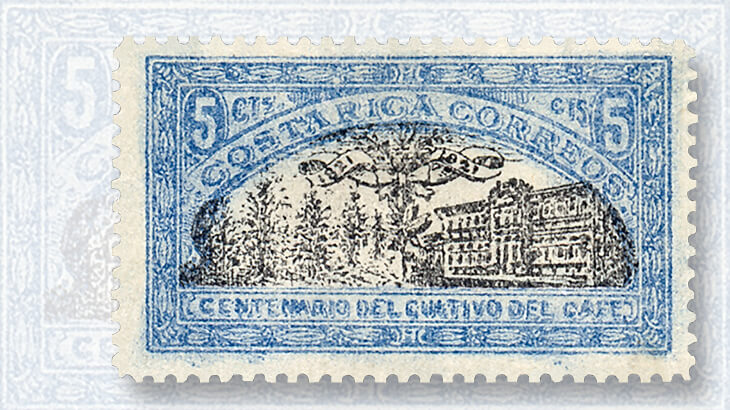 A stamp issued in June 1921 marked a century of coffee production in Costa Rica, and might also have provided funding for a celebratory festival for the milestone.
Previous
Next

Costa Rica, in Central America next to Nicaragua, Panama, Ecuador, and the Pacific Ocean and Caribbean Sea, was visited by Christopher Columbus in 1502. The explorer supposedly gave the country its name — “Rich Coast” in Spanish — because he believed, or wishfully thought, that it was full of precious metals.

Centuries later, in 1796, a true treasure arrived in Costa Rica: neither gold nor silver, but the coffee plant, imported from its discovery spot in the mountainous rainforests of Ethiopia by way of a Spaniard living in Havana, Cuba. The transplant began to thrive in the soil and climate of its new home.

By the 19th century, the government was fully encouraging coffee production, and exported coffee became a major source of revenue for the nation’s economy, exceeding cacao, sugar, and tobacco by 1829. England became an excellent market for Costa Rican coffee beginning in 1843, despite its national affection for tea.

Bananas, cotton, and some other crops for export eventually became important in Costa Rica, but coffee — the country’s first export and its only one until 1890 — continued to fuel the country’s economy, as it still does today.

Almost 52 percent of the country’s coffee is exported to the United States, where the National Coffee Association estimates that 54 percent of Americans over the age of 18 drink coffee every day, for a daily average of 3.1 nine-ounce cups, and a nationwide coffee expenditure of $40 billion a year.

On June 15, 1921, a decree from President Julio Acosta Garcia announced “a fete” organized by the faculty of the Escuela Normal (the Normal School, a teacher-training institution) of Costa Rica, “with the object of commemorating the Centenary of the Introduction of Coffee into the country.”

To fund the celebration, the decree explained, “an issue of twenty-five thousand postage stamps of the value of five centimos each” would be available “during the eight days before and the eight days after the twenty-ninth of the present month in which the festivities are to be inaugurated.” The issuing and circulation of the stamps “shall extend only to the period aforesaid.”

Writing in the Congress Book of 1953, H.D. Mitchell questioned the legitimacy of this stamp (Scott 103, issued June 17, 1921), as it was supposedly valid for only 17 days and the profits went not to the government but to the Escuela Normal, making it more of a semipostal stamp than a regular issue.

Another question regarding the stamp is nonphilatelic: Namely, why was 1921 considered the centenary of coffee production in Costa Rica? As mentioned earlier, records indicate that the plant arrived in 1796 and was cultivated immediately, albeit not on a commercial level.

The significance of 1821 in Costa Rican history is related to its coffee crops, but as the year of its declaration of independence from Spain.

It is true that in 1821, coffee plants and land to grow them were made available to the people, greatly expanding the potential for economic growth and prosperity in the country. Perhaps that milestone, when coffee growing was officially encouraged on a wide scale, was considered the true beginning of Costa Rican coffee.

Because the June 1921 stamp had bypassed the usual procedures for producing a new issue, the Post Office Department might have felt deprived of its chance to mark the centennial, or perhaps the higher officials felt that other opportunities remained for coffee postal propaganda.

A presidential decree of Jan. 4, 1922, beginning with the line, “At the request of the Postmaster General,” stated that a “Surcharge with a design which represents a sack with the legend ‘Cafe de Costa Rica’” would be added to six existing regular postage stamps, in specified quantities of each denomination.

The “sack” on the overprint resembles a pillow, but so does an actual coffee bag. The overprint design does include some shading to indicate the rough surface of a burlap bag.

The stamps to be overprinted were from the five lowest denominations of the eight-stamp set of 1910 honoring national public figures, plus the 1921 stamp (Scott 110) depicting Simon Bolivar. The overprints were typographically added by the Imprenta Nacional (national printing works).

The details of the stamps are as follows, including the Scott number of the original issue and that of the overprinted stamp, the denomination, the quantity surcharged, and the ink color of the overprint.

In an article titled “Recognizing the Counterfeits of the ‘Coffee-bag’ Overprints” in the June 1955 American Philatelist, H.D. Mitchell states that full 100-subject plates were prepared for each denomination of the overprinted stamps with “1921” as the first line of the surcharge.

The samples were presented to the secretary for government, Aquiles Acosta, whose department included postal affairs, and Acosta “rejected the idea of a dated overprint for the logical reason that Costa Rican coffee was excellent in any year,” wrote Mitchell. Plus, the coffee promotion program was intended to be indefinite, not just a 1921 commemoration.

Essays exist for all denominations with the “1921” first line, which was erased from the plate before the overprinting was done. The overprinted stamps were released in spring 1922 (the Costa Rica Postal Catalogue by Hector R. Mena lists the release date as Jan. 11, 1922), so the 1921 reference would have made even less sense.

In his 1953 Congress Book article, H.D. Mitchell mentions an anecdotal tale (he heard it third-hand) of a single coffee-bag overprinted stamp, denomination unstated, displaying traces of the erased “1921.”

The alleged traces could have been merely part of a clumsily forged stamp, of which there are many. The Scott Classic Specialized Catalogue of Stamps and Covers 1840-1940 adds a footnote to the Scott 111C-111H listings: “Inverted overprints exist on all values. Value, set $20. Counterfeits predominate.”

Mitchell points out that large quantities of demonetized stamps of the 1910 regular series were disposed of by the Costa Rican government in 1924, providing ample supplies for counterfeiters to augment with coffee-bag overprints.

Ironically, 1922 was not a very good year for Costa Rica’s coffee production. A U.S. consular report from San Jose in October 1922 to the Foreign and Agricultural Service of the U.S. Dairy Association stated that the crop “was expected to be between 46,300,000 pounds and 50,700,000 pounds, which is considerably below the production of last year.” The report added, “The quality, however, is unusually good.”

The crop has been declining again in recent years, not because of lessening demand worldwide, but due to coffee leaf disease caused by a rust fungus, Hemileia vastatrix. The disease has been around since the 19th century but is wreaking modern havoc in susceptible coffee plantations in Peru, Guatemala, and Mexico, as well as Costa Rica, where the majority of the crop has been affected.

This gloomy situation might preclude a stamp in 2021 for the bicentennial of Costa Rican coffee raising. In the meantime, a set of the 1922 coffee-bag overprinted stamps is valued at $7.75 unused and $3.55 used in the 2017 Scott Classic Specialized catalog.