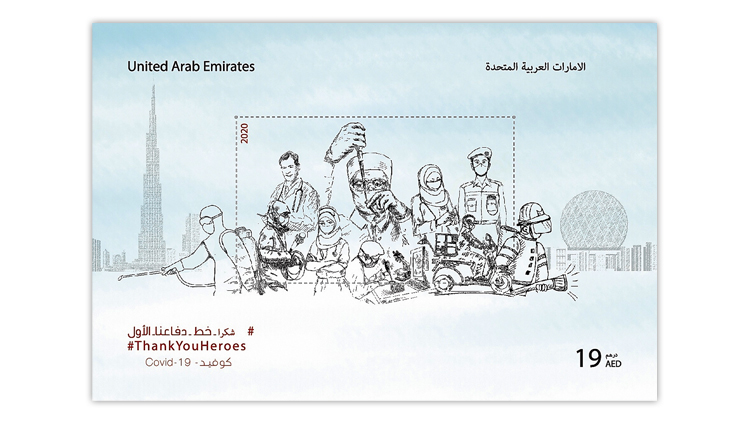 A single-stamp souvenir sheet issued May 10 by the United Arab Emirates thanks the heroes of the coronavirus-COVID 19 pandemic. 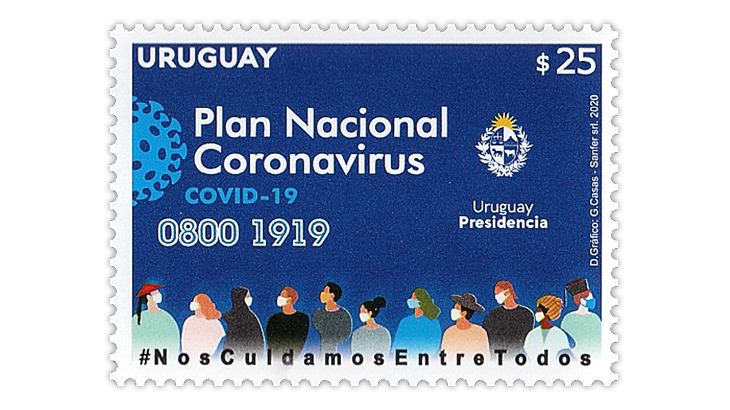 Uruguay commemorates its coronavirus national plan on this 25-peso stamp issued May 13. 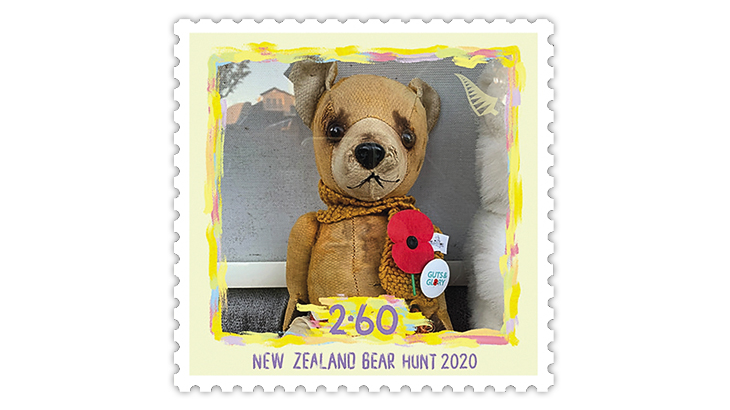 A well-traveled teddy bear that has been loved for more than 50 years is shown on one of the stamps in the May 20 New Zealand Bear Hunt issue. The objective of the bear hunt was to place teddy bears in windows and other locations to spread cheer during the coronavirus-COVID 19 lockdown. 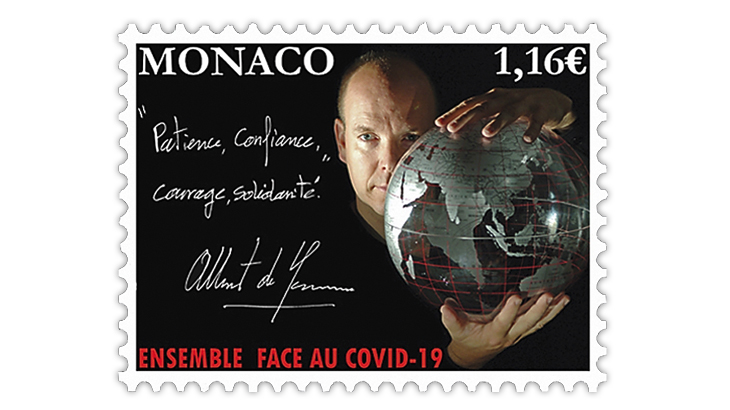 Monaco’s Solidarity-COVID 19 postage stamp shows Prince Albert II and his handwritten message of solidarity in response to the pandemic.
Previous
Next

Several postal administrations have issued or are planning to issue stamps in response to the coronavirus COVID-19 pandemic.

A few of the stamps have been pictured in previous issues of Linn’s, beginning with the first coronavirus-related stamp issued March 17 by Iran (April 4, page 12). This 18,000-rial stamp honors medical professionals as frontline fighters in the coronavirus outbreak.

A report on the stamps from Vietnam and Switzerland appeared on the front page of the April 27 issue of Linn’s, and news about stamps from Liechtenstein and the Isle of Man were published in the May 11 and May 25 issues, respectively.

Continuing in chronological order, the two stamps and souvenir sheet from Liechtenstein were issued on March 20.

In announcing the stamps, Liechtenstein Post said that their purpose was to encourage letter writing and staying in touch at the moment when "personal contact with our loved ones is often not possible for us." Liechtenstein Post considers these stamps as part of its personal stamp program although the designs can not be customized.

The Swiss COVID-19 Solidarity semipostal stamp was issued April 6. A month later, on May 6, Swiss Post said that the stamp had helped it "donate around 1.25 million francs [more than U.S. $1.28 million] to people in need."

The Isle of Man also is donating money raised from sales of its Carry Us Through stamps issued May 4 to charity. The Isle of Man described the designs of the stamps as "highlighting the message that Love, Faith, Care, Compassion, Work, Community, Words and Science will #CarryUsThrough these unprecedented times."

Since the aforementioned reports, at least five other postal administrations have reported that they issued stamps in May in response to the pandemic.

On May 7 Morocco (Poste Maroc, www.philatelie.ma) released a semipostal stamp "to pay tribute to all those involved in the fight against the Coronavirus in Morocco" and to raise money for the country’s special fund for COVID-19. The stamp is denominated 3.75 dirham and has a surtax of 5d for the special fund.

The design depicts a map of Morocco in red with a green star, representations of the coronavirus, a line of frontline workers (including a letter carrier) and city buildings.

The sheet, which measures 80 millimeters by 120mm, shows a drawing of a variety of these heroes, including medical workers, a fireman and a delivery person on a motorcycle. Skyscrapers, other city buildings and a glass dome also are pictured.

Images of stamps from China were revealed in early April with an announced issue date of April 7. However, China Post (www.chinapost.com.cn) didn’t issue its se-tenant pair of 1.20-yuan COVID-19 stamps until May 11, and by that time, there were some revisions to the designs.

In a story posted on its website, the English-language Chinese newspaper Global Times described the issued stamps as depicting "images of People’s Liberation Army commanders, medics, scientific researchers, community workers, police and volunteers, using a Chinese character ‘Zhong’ literally meaning ‘mass’ to connect the two stamps, which implies that people nationwide, under the strong Party leadership, are standing together in the face of a major public health crisis."

The Global Times also reported that the proceeds from the sale of China’s se-tenant pair of stamps and related products will be donated to fight the pandemic.

The 25-peso stamp issued May 13 by Uruguay (Correo Uruguayo, www.correo.com.uy) commemorates the national plan to fight the coronavirus.

The stamp’s design even includes the phone number of the coronavirus information service. Also pictured are a line of symbolic people wearing masks, the coat of arms of the president of Uruguay and a representation of COVID-19. Inscribed across the bottom is "#NosCuidamos EntreTodos" which translates to "We take care of each other."

The hunt was for teddy bears. New Zealand Post said: "During the COVID-19 lockdown, New Zealand families were entertained and delighted by the phenomenon of the bear hunt. Through the simple act of putting a teddy bear in the window of their homes or other creative locations, New Zealanders have been able to participate in creating a magical experience for kids (and big kids) during a stressful time."

On April 22 New Zealand Post invited people to submit photographs of their teddy bears at home to be featured on the stamps. The six bears selected were Theodore Bear, Hay Hay Teddy and Lubert for the three $1.30 stamps; and Childhood Bear, Little Ted and Frontline Bear for the three $2.60 stamps.

The stamps were issued in separate panes of six and in a souvenir sheet with all stamp designs.

New Zealand Post is selling the souvenir sheet for NZ$14.70, $3 more than the face value of the stamps. That $3 amount will be donated to the New Zealand Red Cross, and the sheet is inscribed "New Zealand Bear Hunt Supporting NZ Red Cross."

These words appeared above the prince’s signature on a statement that expressed his thanks for expressions of sympathy received after the March 19 announcement that he had tested positive for COVID-19. (A March 31 statement said the prince was "declared cured and in good health.")

The handwritten words (in French) are on the left side of the stamp, and on the right is a photograph of Albert II holding a globe. Inscribed in red across the bottom are words that translate to "Facing COVID-19 together."

The postal administrations of Brazil, Guernsey, the Philippines and the United Nations have announced plans to issue stamps related to the pandemic.

Brazil has added a pane of six Combat COVID-19 stamps to its program with a tentative release date in June, but has provided no further details.

Guernsey Post has organized a stamp-design contest for children.

The May 1 press release from Guernsey Post said, "We’re looking for children to create designs for our #GuernseyTogether and #AlderneySpirit stamp competitions that relate to the current pandemic in a positive way."

The resulting stamps, 12 for Guernsey and four for Alderney, are scheduled to be issued later this year, according to the press release.

The Philippines’ PHL Post also used its Facebook page to reveal the designs for an upcoming issue of seven stamps called Frontline Heroes. A release date was not announced.

As reported in the June 1 issue of Linn’s, the United Nations has added a July 24 issue called "We are all in this together — Covid-19" to its stamp program.

In addition to postage stamps, postal administrations have also issued postal stationery and machine-vended labels and used special postmarks with messages of support during the pandemic.

Information about these and more can be found in the posts to the new Facebook group for COVID-19 stamps and related postal items.

The "about" section of this public group says that it was "created for all stamp lovers with new thematics. In those harsh times we must stay home and stamps are one way to maintain focused and relaxed at same time. Certainly there will be more issues to follow."