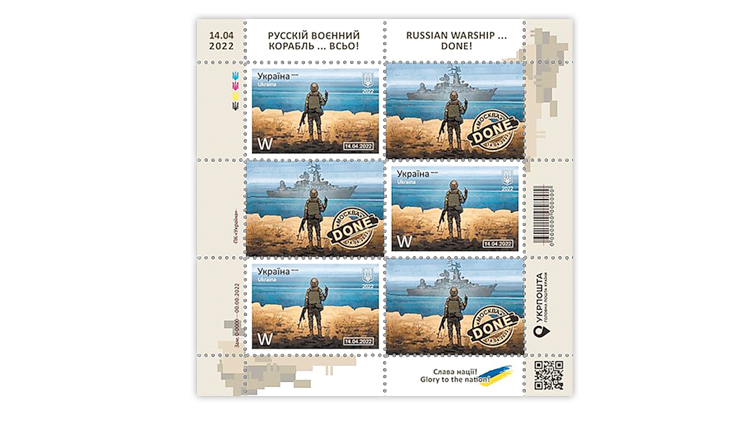 Ukraine has announced plans to issue a pane of three stamps with three labels showing before and after images of the sinking of the Russian warship depicted on the original “Russian warship go f--- yourself” stamps issued April 12.

The online shop of Ukraine’s post office, Ukrposhta, went down the same day in April that Ukrposhta was set to place back on sale additional examples of its two April 12 stamps with the theme “Russian warship go f--- yourself.”

The website remains down as of mid-May. A statement on the site says, “Due to series of cyber attacks we had to temporarily close our online shop.”

A small supply of 5,000 panes of six (30,000 stamps) of the April 12 stamps was sold in early May via another website that the post office shared on its social media network. That website did not have the stamps in stock when Linn’s checked on May 10.

In an April 22 Facebook post, confirmed with a comment on May 7, Ukraine’s post office announced that it will continue the theme with another stamp issue in a pane of three with three labels. The label shows the defiant response of the Ukrainian defenders of Snake Island when they were asked to surrender by someone aboard one of the two Russian warships that attacked the island on Feb. 24.

For the new stamp design, the original artwork was modified to remove the battleship, which Ukrainians sunk on April 14, two days after the first stamps were issued.

The selvage of the pane carries the message “Russian Warship ... DONE!” and the date of the sinking.

Igor Smelyansky, the general director of Ukrposhta, indicated on his online Telegram channel that 5 million of the new stamps are being printed with the issue date to be revealed in mid-May.