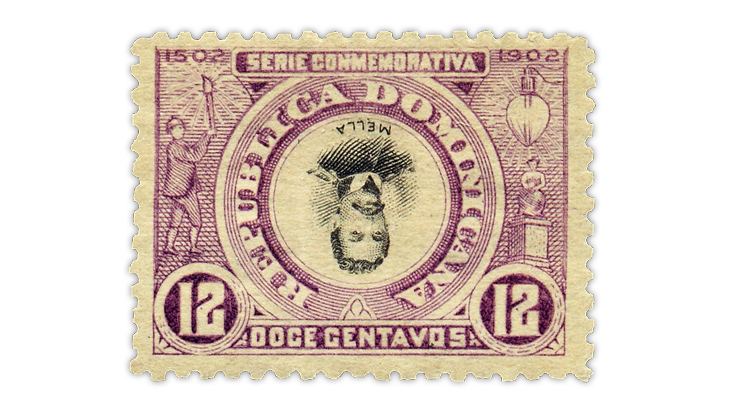 The Dominican Republic comprises roughly the eastern five-eighths of the island of Hispaniola in the Greater Antilles Archipelago in the Caribbean Sea. The remainder of the island is the nation of Haiti.

Christopher Columbus discovered the island on his first voyage to the New World. Originally a Spanish colony, the island was freed from France by the Haitian Revolt. The largely Spanish-speaking Dominicans declared their independence from Haiti in 1844.

On Feb. 25, 1902, the Dominican Republic issued a set of six bicolor engraved stamps (Scott 144-150) to commemorate the 400th anniversary of the founding of Santo Domingo by Bartholomew Columbus. All of the stamps from the set, except the 10-centavo Francisco Sanchez stamp (Scott 147), exist with the center inverted.

These error varieties are in strong demand and are undervalued in the Scott catalog. They are a good buy, even in less than very fine grade, at $30 each. You are unlikely to find them offered as a complete set.