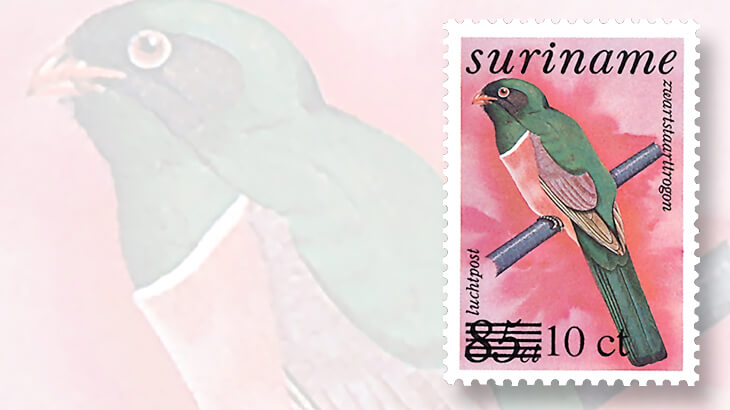 The 1987 Surinam set of three overprinted and surcharged Bird airmail stamps (Scott C103-C105) is a good buy in mint never-hinged condition or used condition at the 2017 Scott Standard Postage Stamp Catalogue value of $10.

A former Dutch colony on the northeast coast of South America, Surinam has a population of about 570,000, most of whom live along the Caribbean Sea coast. Ethnically, the people of Surinam are a mixture of East Indian, Javanese, African, and Indian. Culturally, Surinam is considered to be part of the Caribbean, rather than mainland South America.

Dutch is the official language, but Sranan, a form of pidgin English, is informally used and more widely spoken. The country was part of the Kingdom of the Netherlands until becoming independent on Nov. 25, 1975. It retains close cultural and economic ties to the Netherlands.

Surinam issued its first stamps in 1873. Since independence, it has been a prolific issuer of topical stamps. Surinam is a virtual aviary of Bird topical stamps. The colorful plumage of its indigenous bird species is shown to great advantage on its stamps, which generally have high production values.

While some sets of Surinam Bird stamps are pricey, most are easily obtainable. One that is more difficult to find is the set of three overprinted and surcharged Bird airmail stamps (Scott C103-C105) issued in March 1987.

The 2017 Scott Standard Postage Stamp Catalogue values the set of three at $10, with the value in italics for both mint never-hinged condition and used condition. In this case, the italicized values indicate the Scott editors had little market data available when valuing these stamps.

If you find the set offered at the Scott catalog value, it would be a good buy.