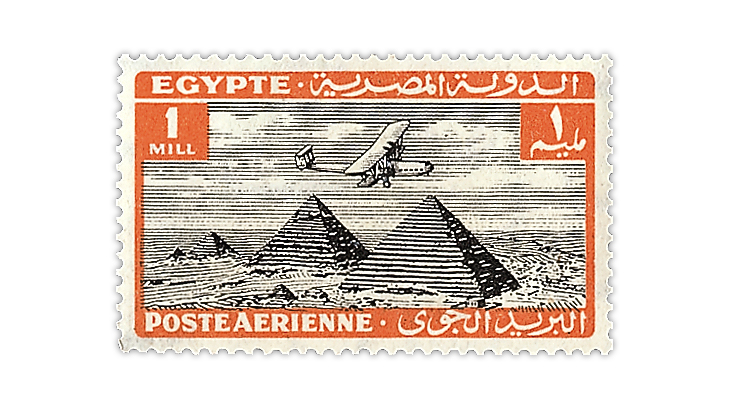 Egypt is one of the most popular Middle Eastern countries with United States collectors.

Egypt issued its first postage stamps in 1866, while still under the suzerainty of the Ottoman Empire. The ruling dynasty of Egypt was founded by Albanian soldier Muhammad Ali, who came to power in 1805. He owed only nominal allegiance to the Sublime Porte (the Ottoman government) and in practice ruled independently.

In 1882, Egypt became a de facto protectorate of the British Empire. In 1914, after the Ottoman Turks joined the Central Powers in World War I, Egypt declared its independence, and Hussein Kamel ruled as sultan of Egypt. In 1922, Sultan Faud became King Faud I of Egypt. In 1953, the last king, Farouk I, was overthrown by a military coup, and Egypt became a republic.

From 1933 to 1938, Egypt issued a set of 21 Airplane over Giza Pyramids airmail stamps (Scott C5-C25). The stamps are bicolor with the frames in a bright color and the vignettes usually in a darker one.

The design showing a modern biplane cruising low over the ancient tombs appeals to both aviation and Old World archeology topical collectors.