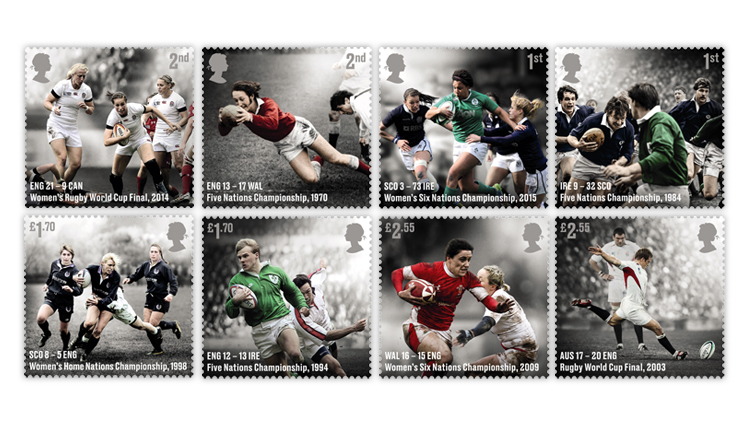 Great Britain’s Royal Mail is celebrating rugby on a set of eight stamps to be issued Oct. 19. The stamp designs, which were revealed Oct. 5, show rugby legends in action during the past 50 years. The stamps represent both men’s and women’s rugby union matches and teams of the four home nations of the United Kingdom (England, Scotland, Wales and Northern Ireland).

Great Britain’s Royal Mail is issuing eight stamps Oct. 19 in recognition of two rugby 150th anniversaries: the formation of the Rugby Football Union on Jan. 26, 1871, and the first international match between England and Scotland two months later on March 27, 1871.

When it revealed the designs of the eight Rugby Union stamps Oct. 5, Royal Mail said, “The dynamic images feature moments from iconic men’s and women’s rugby union matches for all four Home Nations over the past 50 years.”

Royal Mail added that in creating this stamp issue it worked with the rugby governing bodies of the four home countries of the United Kingdom: the Rugby Football Union (England), Scottish Rugby Union, Welsh Rugby Union and Irish Rugby Football Union. The latter represents both Northern Ireland (part of the United Kingdom) and the Republic of Ireland.

The stamps are in four se-tenant horizontal pairs. One stamp in each pair shows a scene from a women’s rugby match, and the other depicts a men’s match.

For example, one stamp in the pair of nondenominated second-class stamps features the 2014 Women’s Rugby World Cup final, and the other depicts the 1970 Five Nations Championship.

England’s team won the 2014 Women’s Rugby World Cup, defeating Canada 21-9. Royal Mail identified two of the players on the stamp, saying that tries (touchdowns) from Emily Scarratt, who is pictured with the ball, and Danielle Waterman secured the victory.

The five nations of the 1970 championship were England, France, Ireland, Scotland and Wales. The Welsh team won, defeating England 17-3 in the final. On the stamp, J.P.R. Williams is pictured with the ball.

The other stamp in the first-class pair shows Ireland’s 73-3 victory over Scotland in the women’s 2015 Six Nations Championship. Teams from the five aforementioned nations plus Italy competed in this championship. The stamp pictures Sophie Spence, who ran 11 tries in the match.

The first stamp in the £1.70 pair celebrates the 1998 Women’s Home Nations Championship, in which Scotland defeated England 8-5.

Royal Mail said, “Led by Kim Littlejohn (pictured, far left), Scotland completes a five-year journey from novices to best team in Europe with a win that boosted the sport’s status in the country.”

The other £1.70 stamp shows Simon Geoghegan’s brilliant try against England in the 1994 Five Nations Championship, in which Ireland defeated England 13-12.

Twenty years later, in 2014, an article on the sports website The42 (www.the42.ie) began, “The name ‘Simon Geoghegan’ still evokes memories of a blitzing Irish try against England at Twickenham in 1994 and his billowing, green jersey.”

On the first £2.55 stamp, Welsh team captain Melissa Berry carries the ball in the 2009 Women's Six Nations Championship, while Vicky Macqueen of England gets ready to make the tackle. Royal Mail reported that Non Evans kicked the winning penalty in the final minute as Wales beat England for the first time. The score was 16-15.

Shown on the second £2.55 stamp is one of Jonny Wilkinson’s five successful kicks in the 2003 Rugby World Cup final. These kicks and Jason Robinson’s try propelled England to a 20-17 victory over Australia. The fifth Rugby World Cup, it was the first won by a nation in the Northern Hemisphere.

True North’s designs for the stamps combine selective colorization highlighting the players in the foreground with a monochrome background.

International Security Printers printed the stamps by lithography in sheets of 60, sold in panes of 30 at most postal outlets. Each stamp measures 37 millimeters by 35mm and is perforated gauge 14 by 14.5.

In conjunction with the Rugby Union issue, Royal Mail is offering first-day covers, eight postcards reproducing the designs of the stamps, and a presentation pack of the stamps with text about the history of rugby by sportswriter Richard Rae.

The text begins, “Sports with which teams wrestle for possession of a ball and carry or pass it between teammates have been popular for thousands of years. The rules varied though — not just from country to country but from village to village — until 150 years ago, when some like-minded clubs came together to draw up a set of laws. Modern rugby union was born.”