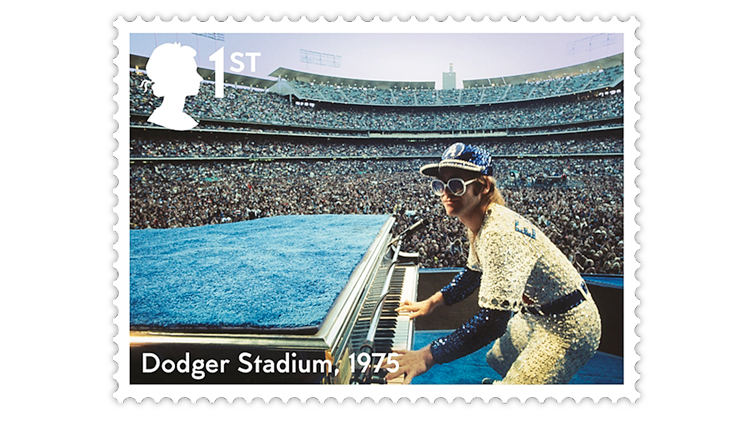 Elton John is shown performing in 1975 at Dodger Stadium in Los Angeles on a first-class stamp from Great Britain’s Royal Mail. The stamp is part of a set of 12 Elton John stamps issued Sept. 3. 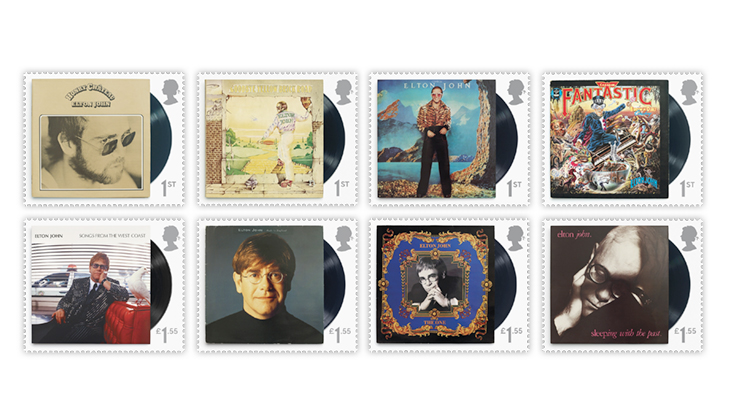 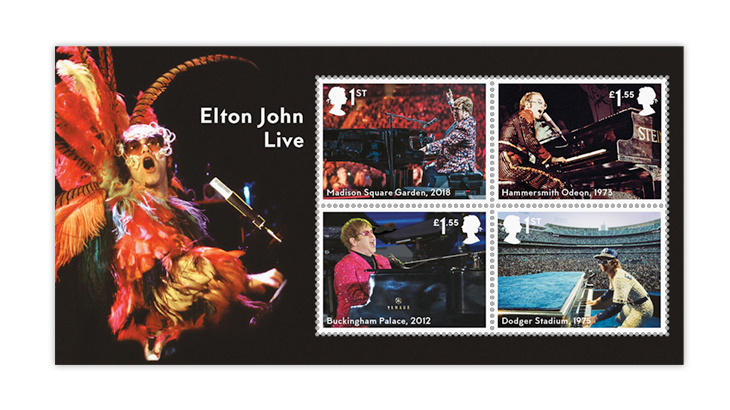 A souvenir sheet in Great Britain’s new Elton John set features four stamps that picture Elton in concert at venues in England and the United States.
Previous
Next

Sir Elton John, the celebrated rock musician, songwriter, philanthropist and activist, has been honored on a new set of stamps from Royal Mail, the postal authority of Great Britain.

Royal Mail revealed the new stamps on the issue date.

“A global superstar, Elton John is one of the most successful recording artists of all time and has, over his 50-year career, achieved one diamond, 38 platinum or multi-platinum and 26 gold albums,” Royal Mail stated in a Sept. 3 news release.

“He has been awarded 13 Ivor Novellos, five Grammys and the Grammy Legend Award, five BRITS, including the first BRITS Icon Award, an Academy Award, a Tony Award and a Golden Globe.

“He wrote the award-winning and much acclaimed soundtracks and stage music for The Lion King and Billy Elliot.

“He has been deeply influential to successive generations of songwriters. His work has been covered by hundreds of artists in different genres, from Ed Sheeran to Aretha Franklin to Lady Ga Ga.”

With longtime songwriting partner Bernie Taupin, Elton was inducted into the Songwriters Hall of Fame in 1992, and received the Johnny Mercer Award, the hall’s highest honor, in 2013.

He was knighted by Queen Elizabeth II in 1998, and earlier this year he was awarded the Legion d’Honneur by French President Emmanuel Macron.

Royal Mail provided the following details about the eight albums whose covers are featured on the stamps.

Honky Chateau, 1972. Recorded in the Chateau d’Herouville near Paris, Honky Chateau was Elton John’s breakthrough pop album, his first number one and home to Rocket Man — one of three songs he composed on the morning of the first day of recording.

Goodbye Yellow Brick Road, 1973. A double album that perhaps represents the artistic pinnacle of Elton’s 1970s’ career — a teeming, eclectic songwriting masterclass that features Candle In The Wind, Saturday Night’s Alright For Fighting and Bennie and the Jets.

Caribou, 1974. His fourth consecutive U.S. number one album, Caribou, is best-known for The Bitch Is Back and the epic Don’t Let The Sun Go Down On Me, but its most striking moment might be Ticking, the eerie saga of an armed siege in a bar.

Captain Fantastic And The Brown Dirt Cowboy, 1975. A concept album on which lyricist Bernie Taupin recounts the early days of his and Elton’s career, complete with a vivid depiction of Elton’s 1968 suicide attempt, Someone Saved My Life Tonight.

Sleeping With The Past, 1989. The last album Elton John made before going into rehab was intended as a homage to the soul and R ‘n’ B music that had inspired him in the 1960s: in Sacrifice, it produced his first U.K. solo number one single.

The One, 1992. The cover was designed by Gianni Versace, its lyrics haunted by the unfolding AIDS crisis and Elton’s battle with addiction, The One re-established the now clean and sober Elton John.

Made In England, 1995. Largely recorded live in the studio, Made In England’s upbeat title track — a hit single in 1995 — masks the rest of the album’s mature mood, which features reflections on ageing, both positive and negative.

The album cover stamps are each designed showing a record album peeking out of the right side of the album cover.

The four scenes pictured on the souvenir sheet stamps are from the 1973 Christmas show at the Hammersmith Odeon, London; the 1975 Dodger Stadium concert in Los Angeles; the 2012 Diamond Jubilee Concert at Buckingham Palace in London; and a 2018 concert at New York City’s Madison Square Garden.

“To say I was surprised when Royal Mail got in touch, is an understatement,” Elton said about the new stamp issue. “Never did I think I’d appear on a stamp! It’s wonderful, a great honour.”

Born Reginald Kenneth Dwight on March 25, 1947, in the London suburb of Pinner, Elton John began studying piano and classical music at the Royal Academy of Music in London when he was 11. Influenced by the breakout rock ’n’ roll stars of the 1950s, he began playing in pubs as a teen and was part of the group Bluesology in the mid 1960s.

He would later combine the first names of two Bluesology bandmates, Elton Dean and John Baldry, to create his new identity as Elton John.

He met lyricist Bernie Taupin in 1967 when they both answered an advertisement for songwriters in the British music magazine NME.

It was the start of an enormously successful songwriting partnership that continues today.

The first Elton John album, Empty Sky, received a modest response when it was issued June 6, 1969, but the follow-up, released 10 months later and simply titled Elton John, included Your Song.

With its spare musical backing highlighted by Elton’s piano and Paul Buckmaster’s string arrangement, the single reached the eighth position on the Billboard top music chart but has since become a classic ballad of the rock era. Your Song was inducted into the Grammy Hall of Fame in 1998.

The singles Can You Feel the Love Tonight and Circle of Life, both co-written with Tim Rice and featured in the soundtrack of The Lion King, have also become classics.

Elton has toured extensively for much of his career, filling auditoriums and selling out stadiums worldwide, including two multiyear residencies at Caesar’s Palace in Las Vegas.

Last year he announced his impending retirement from touring by launching his Farewell Yellow Brick Road tour of more than 350 dates on five continents over the course of three years.

In 2019 his life story was chronicled as a fantasy musical in the motion picture Rocketman, starring Taron Egerton as Elton and Jamie Bell as Taupin. The film soundtrack includes a new duet recording by Elton and Egerton, (I’m Gonna) Love Me Again, written by John and Taupin.

Elton established the Elton John AIDS Foundation in the United States in 1992 and in the United Kingdom in 1993, and remains actively involved in its work.

“Through the generous support of far-sighted individuals, foundations, and corporations, the two foundations together have raised more than $400 million over the past quarter century to challenge discrimination against people affected by the epidemic, prevent infections, provide treatment and services, and motivate governments to end AIDS,” the foundation reports.

The current first-class mail rate in Great Britain is 70 pence. The £1.55 stamps pay the rate for letters to Europe weighing up to 20 grams.

Royal Mail Group Ltd. designed the stamps, based on an original design by Studio Dempsey. John Ross photographed the album covers. International Security Printers printed the stamps by lithography in sheets of 48 (sold in panes of 24 at most postal outlets). The stamps are 38 millimeters by 31mm and perforated gauge 14 by 14.

The souvenir sheet also was designed by Royal Mail Group and printed by lithography by International Security Printers. The sheet measures 146mm by 74mm, and the individual stamps are 41mm by 30mm, perforated gauge 14.5 by 14.

The first-day covers are available with different postmarks. A postmark from Edinburgh, Scotland, includes the musician’s insignia, and a Pinner postmark spells out his name surrounded by stars.