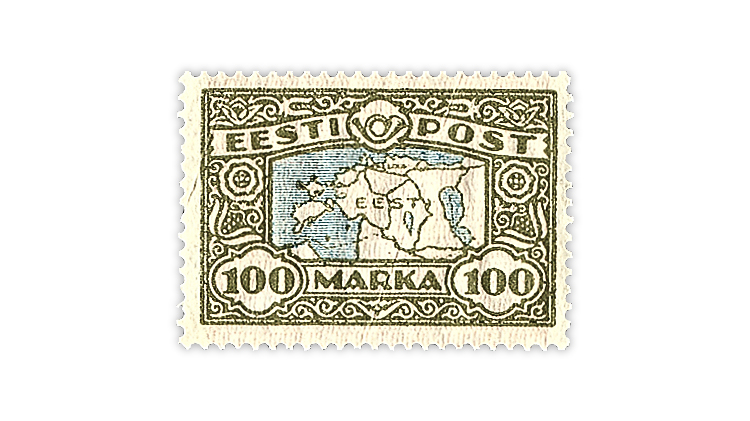 Estonia’s set of two Map of Estonia stamps issued in 1923-24 is hard to find in very fine grade and mint, never-hinged condition.

One of the three Baltic Republics, Estonia lies in northern Europe south of the Gulf of Finland at the eastern end of the Baltic Sea. It borders Latvia to the south and Russia to the east. Estonians speak a Finno-Ugric language closely related to Finnish and more distantly related to Hungarian.

Estonia has been ruled at times and was heavily influenced by Sweden, Denmark and Germany. It was conquered and absorbed by the Russian Empire in 1710 during the Great Northern War.

Estonia declared its independence from Russia on Feb. 24, 1918, but had to defeat the Red Army after it invaded in November 1918 to successfully establish it.

Estonia was assigned to the Soviet Union in the secret protocols of the Nazi-Soviet Nonaggression Pact of 1939. It was annexed by the Soviet Union on Aug. 6, 1940. After World War II, Estonia languished in this prison of nations until declaring the restoration of its independence on Aug. 20, 1991.

Many Estonians came to the United States during WWII and the Soviet occupation. Estonian stamps are popular with American collectors with Estonian roots, as well as with collectors with ties to the other two Baltic Republics — Latvia and Lithuania — who often collect the stamps of all three countries.

In 1923-24, Estonia issued two Map of Estonia stamps, a 100-mark denomination on paper with a lilac network and a 300m stamp on paper with a buff network (Scott 78-79). These stamps are also popular with cartography on stamps topical collectors.

Early printings of U.S. 1931 postage due stamps hard to find