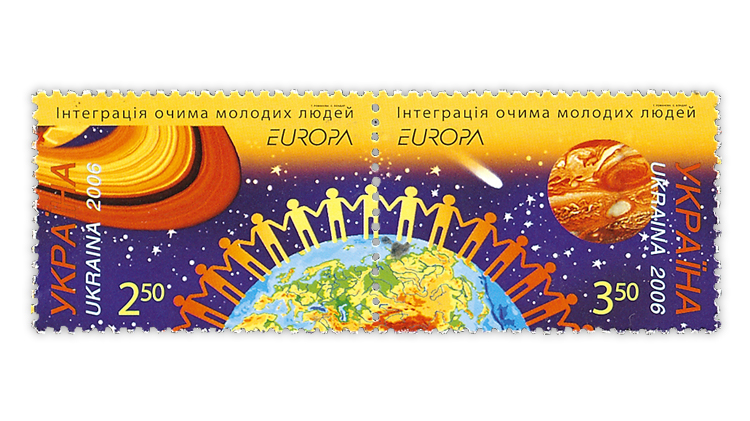 PostEurop has changed the Europa stamp theme for 2023 to “Peace — the highest value of humanity” at the request of Ukrposhta (Ukraine’s post office). Ukraine began issuing Europa stamps in 1997. In 2006, it won PostEurop’s online contest for the most beau

The Europa stamp theme for 2023 was changed to “Peace — the highest value of humanity” at the request of Ukraine’s post office, according to an April 29 press release from PostEurop. The trade association representing European public postal operators, PostEurop also selects the theme for the multination Europa stamp series.

According to the press release, Ukrposhta (Ukraine’s post office) proposed the theme “to show solidarity with Ukraine and to promote the universal value for all humanity — peace.”

A contest will be held to select the common design to be used by all participating nations.

Underwater fauna and flora, originally to be the subject of Europa stamps in 2023, will now be the theme for 2024. Likewise, the theme of national archaeological discoveries is postponed from 2024 to 2025. Each postal administration will select its own stamp designs for these themes.

The decision to change the stamp theme for 2023 was made at the April 25 meeting of the PostEurop board of directors, the press release said.

In addition, PostEurop has previously discussed in meetings held in March and April the possibility of suspending both Russian Post and Belarus’ Belpochta from participating in PostEurop activities. That action will perhaps take place at a virtual meeting of the association’s general assembly on June 1.

An April 28 organizational announcement from PostEurop said that two items on the agenda of that June 1 meeting will be the “amendment of the Association’s Statutes to allow for the suspension or exclusion of a Member from PostEurop” and the “revocation of Mrs. Olga Zhitnikova of JSC Russian Post as a Member of the Board of Directors.”

Both the press release and organizational announcement said that while Russia and Belarus may issue Europa stamps in 2022 “given their membership status at the time of the call for publication and following the existing Europa guidelines,” neither postal administration will be allowed to participate in the most beautiful Europa stamp contest organization by PostEurop.

Public online voting in that contest is scheduled to begin May 9 and continue through Sept. 9.

According to PostEurop, Europa stamps underline “cooperation in the posts domain, taking into account promotion of philately. They also build awareness of the common roots, culture and history of Europe and its common goals.”