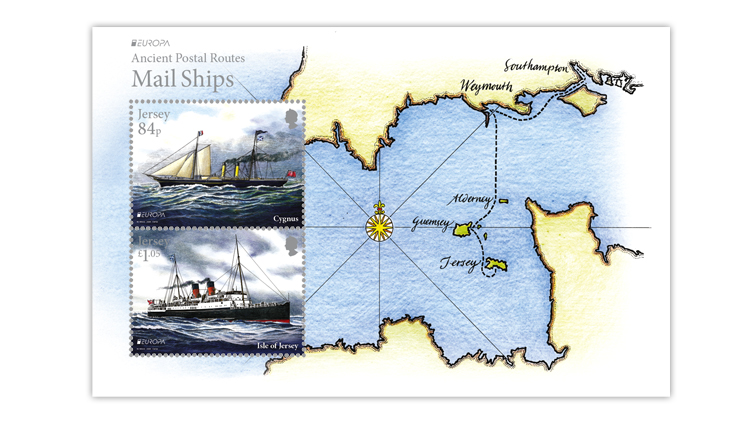 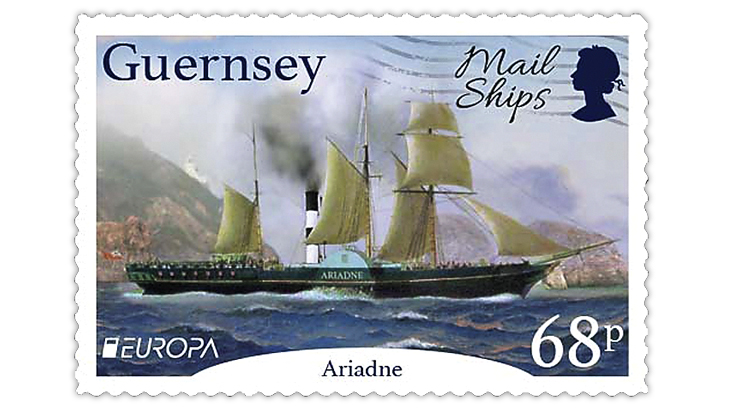 Guernsey’s 68-penny Europa stamp features the mail ship Ariadne, a three-masted paddle steamer that carried mail from Southampton, England, to Guernsey in the first half of the 19th century. 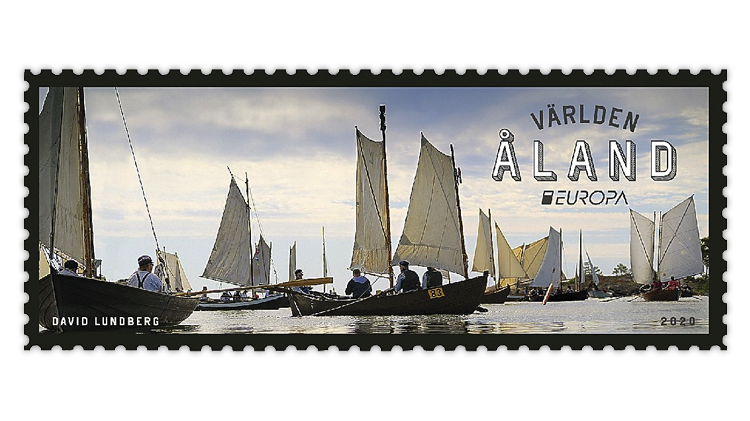 Aland’s Europa stamp for 2020 pictures a scene from the Postal Boat Race. This annual event commemorates the journeys of the farmers who served as postmen, carrying mail by boat between Sweden and Aland for almost 400 years. 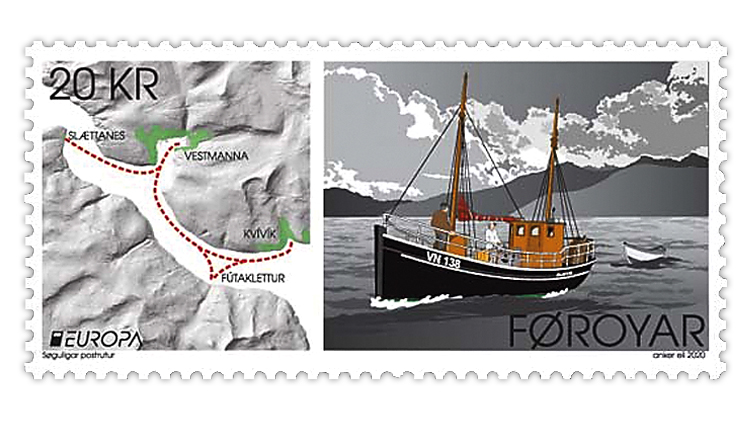 A Europa stamp from the Faroe Islands shows the mail boat Olavur and a map of its route.
Previous
Next

The Channel Islands of Jersey and Guernsey each issued a set of six stamps and a souvenir sheet with designs that picture mail ships.

The set from Jersey, issued April 7, includes two stamps with the Europa designation. The 84-penny stamp shows the Cygnus, a 19th-century ship powered by both steam and sails. Illustrated on the £1.85 stamp is Isle of Jersey, which served the Channel Islands from 1931 to 1959.

Norwegian artist and engraver Martin Morck created the illustrations for the stamps. He said: “To be asked by Jersey Post to develop a set of stamps reflecting the history of Jersey’s mail ships warmed my heart. Besides being an artist, I am also a trained boat builder and nautical history nerd with a big library, so this is a subject I’m very passionate about.”

The set from Guernsey, issued April 1, also includes two Europa stamps: the 68p denomination depicting the Ariadne, a three-masted paddle steamer launched in 1824; and the 85p featuring the Alberta.

Completing Guernsey’s Mail Ships set is the Earl of Chesterfield on a 50p stamp;
Antelope, 75p; Alberta, 85p; Isle of Guernsey, 95p; and Sarnia, £1.02. Designed by Andrew Robinson, the stamps were printed by Cartor Security Printing in six panes of 10 and in a souvenir sheet with the stamps se-tenant.

The panes of 10 include additional images in the selvage and also provide information about the ships. For example, the paragraph on the pane of 10 Alberta stamps reads: “The Alberta, a single-funnelled vessel was built in 1900. She maintained the link between Southampton and the Channel Islands for London & South Western Railway, for thirty years including during the Great War.”

According to a press release from Aland Post, “The race is arranged every year in June in commemoration of the hazardous postal journeys and hardships of the farmer-postmen as they conveyed the mail between Sweden and Aland for almost 400 years.”

The nondenominated stamp is for international mail. The inscription “varlden” above the country name is Swedish for “world.”

Southern Colour Print of New Zealand printed the stamp by offset in sheets of 30.

The Faroe Islands is scheduled to issue two Europa stamps April 27. The stamps commemorate two of the islands’ challenging postal routes: one over water and one over land.

The 20-krone stamp depicts the mail boat Olavur, which carried mail across the Strait of Vestmanna.

This was the second mail boat with that name. The first Olavur, a traditional open Faroese rowboat with an outboard motor, was lost in rough weather on Oct. 1, 1920. According to an article by the stamp’s designer, Anker Eli Petersen, in Posta’s philatelic bulletin, the postman Olavur Olsen, the two men in his crew and a female passenger perished.

Petersen reports that after that accident, open boats were banned from carrying mail across the strait. Olsen’s sons first used the decked fishing boat Helgi on the mail route, replacing it with the second Olavur in 1930.

The other stamp in this set, a 17kr denomination, commemorates the Klaksvík-Vidareidi land route. According to Petersen, this challenging postal route required “hardy mail carriers to vanquish one of the most inaccessible mountain areas in the Faroe Islands.”

Cartor printed the stamps by offset in a booklet of 10 with the two designs se-tenant.