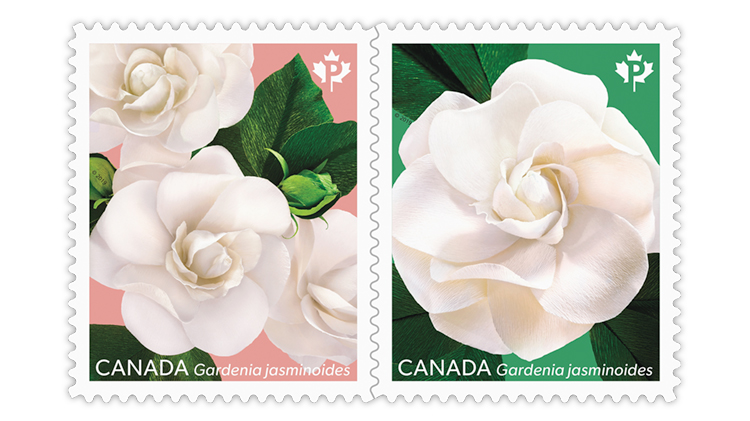 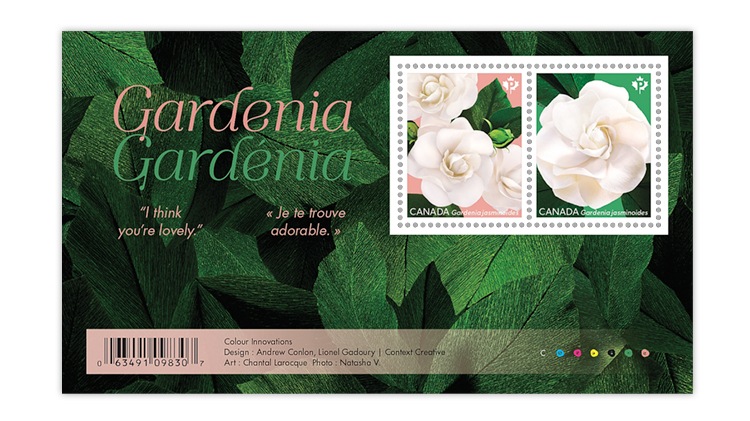 Canada Post’s souvenir sheet for the Gardenia stamps includes a se-tenant pair of the new stamps. The quote “I think you’re lovely,” in French and English on the sheet, refers to the meaning of these flowers during the Victorian era.
Previous
Next

The permanent rate (P) stamps, currently 90¢, created with wedding invitations in mind, are being issued in three formats, appropriately on Feb. 14, Valentine’s Day.

The stamp series, which began in 2002, has included flowers that are both native and non-native to Canada.

The cape jasmine gardenia (Gardenia jasminoides), a popular exotic flower named for its sweet, heady perfume, is native to southern China and Japan.

The shrub grows from 3 feet to 6 feet tall, and the flowers are 3 inches across. The website adds that the flowers bloom throughout the year in regions where the temperatures do not drop below 60 degrees Fahrenheit (15 degrees Celsius) and “in late spring to early summer in cooler climates.”

Canada Post said: “With such beautiful flowers, it’s easy to see why giving gardenias was known as a way of saying ‘I think you’re lovely’ during shy Victorian times. These days, the white petals are considered a symbol of purity, making gardenias a popular choice for weddings.”

The stamps were designed by Andrew Conlon and Lionel Gadoury of Context Creative, using artwork by Chantal Larocque, a paper flower artist. According to Canada Post, Larocque’s artwork was “inspired by a photograph by Natasha V.”

Colour Innovations of Lowe-Martin printed the stamps by six-color lithography as self-adhesives in booklets of 10 and coils of 50 and with PVA gum in souvenir sheets of two. The booklet also includes 10 envelope seals that match the stamp designs.

The booklet stamps measure 26 millimeters by 32mm, and the coil stamps with serpentine die cuts are 24mm by 20mm. The souvenir sheet is 127mm by 78mm.

Canada Post is servicing 7,000 service official first-day covers franked with both of the booklet stamps and with a postmark from Flower’s Cove, Newfoundland (404105131, $2.80 per FDC).

The new Gardenia stamps and related items are available online from Canada Post at www.canadapost.ca/shop, and by mail order from Canada Post Customer Service, Box 90022, 2701 Riverside Drive, Ottawa, ON K1V 1J8 Canada; or by telephone from the United States or Canada at 800-565-4362, and from other countries at 902-863-6550.