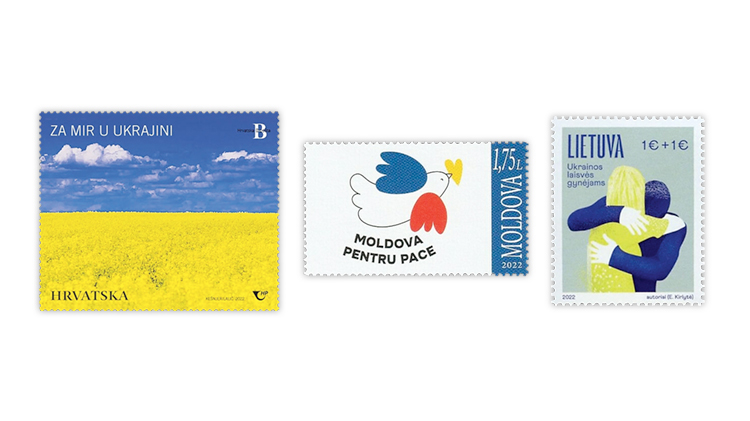 Croatia, Moldova and Lithuania are among the countries that have issued stamps to show their support for the people of Ukraine.

National postal agencies from at least 30 countries have stepped forward to assist embattled Ukraine as that war-torn country attempts to maintain and restore its crippled postal services.

International support has included financial contributions, aid for Ukrainian refugees, the issuance of commemorative stamps, and the waiving of postal fees, especially for humanitarian shipments into the country.

About 20 percent of Ukraine’s territory was cut off from postal services as of the spring, with about 500 post offices ruined or damaged and 450 facilities inaccessible because of occupation by Russian forces, according to Julia Pavlenko, the director of international operations for the country’s postal agency, Ukrposhta.

In addition, 20 percent of Ukrposhta’s employees are working in occupied territory with transportation of mail impeded by damaged roads, bridges and railroads.

Since the beginning of the conflict in late February, Ukrposhta has opened 372 mobile post offices and 14 fixed post offices, along with temporary locations in schools and government buildings. Continuation and adaptation of Ukrposhta’s services are essential for access to pensions, money orders and important goods, Pavlenko added.

In response to this crisis, postal administrations across Europe and beyond have responded with fundraising, free postal services, humanitarian aid and jobs for Ukrainian refugees.

Contributions to UPU’s Quality of Service Fund and its Emergency and Solidarity Fund are aimed at reconstruction of the postal infrastructure and restoration of postal services.

The UPU’s Emergency and Solidarity Fund relies on voluntary contributions from its 192 member countries, postal unions and other postal sector entities. For example, PostNL in the Netherlands donated approximately $516,340, while Japan donated $106,270 to support Ukraine.

The UPU reported other financial pledges from postal agencies in Italy, Panama and Slovakia, while Finland’s Posti raised about $51,320 for charities that support Ukraine’s citizens.

About two dozen other countries — most of them in Europe — are transporting humanitarian parcels free of charge to Ukraine, along with encouraging and matching fundraising efforts, and providing free financial and communications services to refugees.

Even though Belarus has provided tacit support of Russia’s invasion of Ukraine, its postal agency, Belpochta, initiated a drive among its employees to collect toys and personal hygiene items for Ukrainian children, according to the UPU.

Thus far, the postal agencies in Austria, Canada, Croatia, Estonia, France, Latvia, Lithuania, Moldova, Poland, Spain and others have issued either commemorative stamps or semipostal stamps to raise funds in support of Ukraine. The issues from Croatia, Lithuania and Moldova, which were not previously illustrated in Linn’s, are shown here.

In addition, Ukraine is expected to benefit from sales of semipostal stamps ...