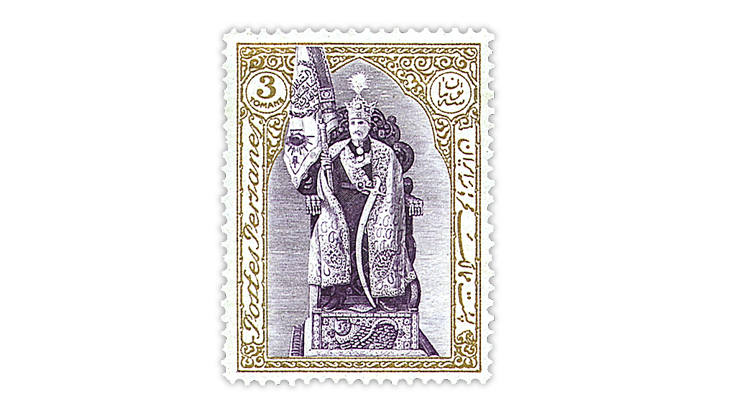 The bicolor design of the Iran 1929 3-toman Reza Shah Pahlavi stamp is an eye-catching example of Asian splendor.

Located in western Asia, Iran is bordered by Turkey, Iraq, Armenia, Azerbaijan, Turkmenistan, Afghanistan and Pakistan; and by the Caspian Sea, Gulf of Oman and Persian Gulf. The heartland of the Persian Empire in antiquity, its 2,500-year monarchy came to an end in 1979 when the Islamic Revolution deposed the last Shah of Iran.

The Pahlavi dynasty was established by Reza Shah Pahlavi, who rose through the military to become Persia’s prime minister in 1923. In 1925, a constituent assembly deposed the last shah of the declining Qajar dynasty, which had ruled Persia since 1794, and chose Reza Pahlavi to replace him as Shah of Persia.

Although he was from the Mazanderani minority group, the new shah sought to mold Persia into one nation with a unified sense of national identity.

In 1935, he changed the name of the country from Persia to Iran (Land of the Aryans), a reflection of the country’s increasing alignment with Nazi Germany.

In August 1941, the Soviet Union and Great Britain invaded and occupied officially neutral Iran. In September 1941, Reza Shah was forced to abdicate in favor of his son, Mohammed Reza Pahlavi.

In 1929, while the country’s name was still Persia, a set of 16 Reza Shah Pahlavi stamps was issued (Scott 744-759). The high-value 3-toman stamp (759) from the set depicts the crowned Reza Shah in his imperial robes of office seated on the throne with a sword and banner. The design of the engraved stamp in gold and deep violet is an eye-catching example of Asian splendor.

The Scott Classic Specialized Catalogue of Stamps and Covers 1840-1940 values the stamp in unused, hinged condition at $175. This is not an easy stamp to find. A lightly hinged example in true very fine grade is a good buy at up to 75 percent of Scott catalog value.

One of the most beautiful U.S. stamp series