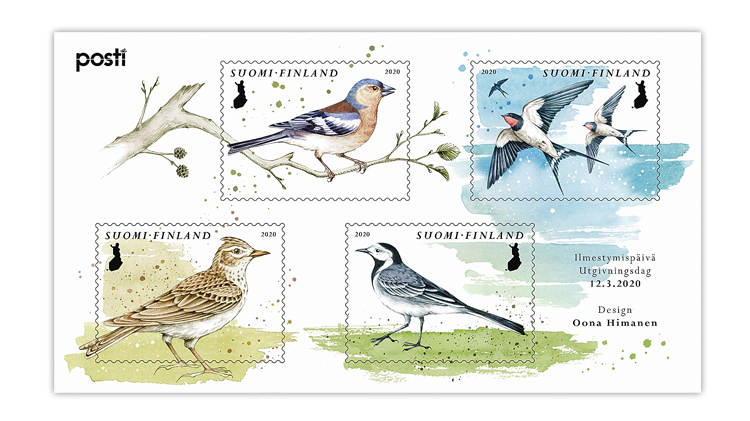 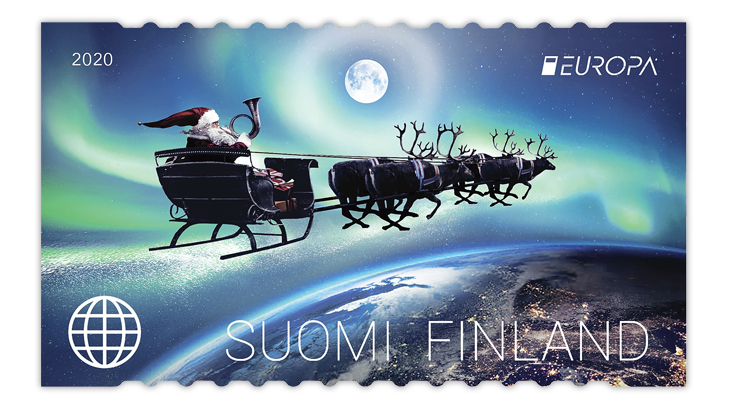 The theme for the multination Europa series in 2020 is ancient postal routes. Finland’s Europa stamp depicts flying reindeer pulling Santa Claus and his sleigh in a sky filled with the northern lights. Santa is holding a post horn. 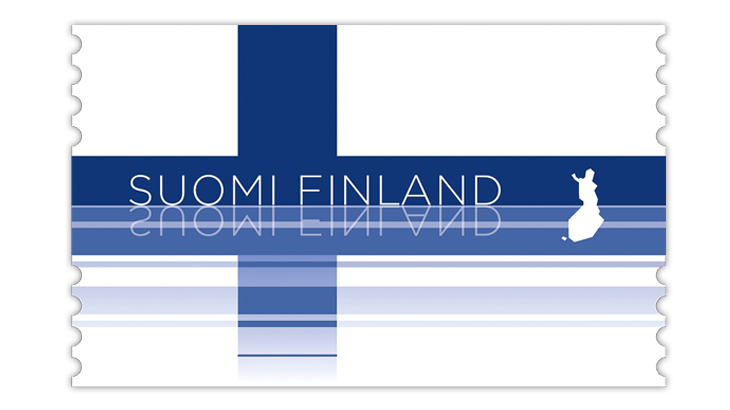 Finland will issue a new flag stamp May 6. Called “Blue Reflection,” the stamp design depicts the blue cross flag reflected on the surface of a lake.
Previous
Next

Finland’s postal administration, Posti, has announced its stamp program for the first half of 2020.

The program includes nine stamp issues with a total of 25 different stamp designs. The issue dates will be Jan. 22, March 12 and May 6. Unless otherwise mentioned, the stamps are nondenominated, paying the domestic rate (currently €1.60).

The stamps to be issued Jan. 22 celebrate friendship, commemorate the 100th anniversary of the Mannerheim League for Child Welfare, and promote the protection of the Baltic Sea.

The Colors of Friendship booklet is Finland’s Valentine issue for 2020. The booklet includes six stamps designed by Samuli Siirala.

In a press release, Posti describes these designs as “retro-style illustrations” that resemble posters and “present the shared moments, joys and memories of a friendship over the years.”

Children created the illustrations for the two Mannerheim League for Child Welfare commemorative stamps. These illustrations by Emma Aalto and Pinja Haapola, who are both 8 years old, were selected from competition entries submitted by students of the Jarvenpaa Art School, in which the children portrayed their own families.

The Mannerheim League for Child Welfare stamps will be issued in a pane of 10 that contains five examples of each stamp.

Author and illustrator Tove Jansson (1914-2001) introduced the fictional Moomins 75 years ago in The Moomins and the Great Flood, published in 1945. A booklet of six stamps to be issued in conjunction with that anniversary are also part of the #OURSEA campaign to be launched in 2020.

The goal of the campaign is to raise €1 million for the work of the John Nurminen Foundation for the Baltic Sea.

Posti said: “The campaign is carried out by Moomin Characters in cooperation with the John Nurminen Foundation, which has been internationally successful in marine protection. The sea plays an important role in the Moomin stories created by Tove Jansson.”

Two of the three March 12 issues feature birds: a set of two stamps for Easter and a set of four showing migratory birds that arrive in spring.

Matti Pikkujamsa’s designs for the Easter stamps include chicks, eggs and willow branches. The two stamps will be issued in a pane of 10 (five of each design).

Posti reports that the Migratory Birds stamps will be produced in two formats, a souvenir sheet and a booklet, each containing four stamps showing a Eurasian skylark, common chaffinch, white wagtail and barn swallow, respectively.

The souvenir sheet will also include lines from an old poem that predicts the arrival of migratory birds and the coming of spring, according to Posti.

The third March 12 issue is called “Two Hearts,” and Klaus Welp’s design for this stamp shows two hearts beating next to each other. The stamp will be issued in a pane of 10.

Welp also designed one of the May 6 issues, an international-rate Europa stamp reflecting the 2020 theme of ancient postal routes for stamps.

Posti selected Santa Claus as the subject for this stamp, saying that he “takes his own routes up in the aurora-lit sky, travelling to every corner of the world in a sleigh pulled by reindeer.”

The stamp will be issued in a pane of 10.

Also slated for the release on May 6 are two stamps presenting an enchanted forest and a single stamp featuring Finland’s flag.

The artwork depicted on the Enchanted Forest stamps is part of the Polar Byzantine collection by Klaus Haapaniemi and Co., and the stamps were designed by Haapaniemi. Posti describes the stamp subjects as a “frozen bilberry shrub” and a “boreal owl with the wings of a butterfly,” respectively.

The Polar Byzantine collection includes clothes and home decor and is based on a lyrical poem about animals.

The Enchanted Forest stamps will be issued in a pane of 10 (five of each design).

A design competition was held to find the artwork for the new stamp showing Finland’s flag. The winning entry by Ville Tietaveinen shows the flag “reflected on the surface of a still lake, forming a blue cross,” according to Posti. Called the “Blue Reflection,” the stamp will be issued in a pane of 10.

Posti added that these 2020 stamp issues are tentative and subject to change.