Finland’s favorite stamp of 2021 features a forest in fall 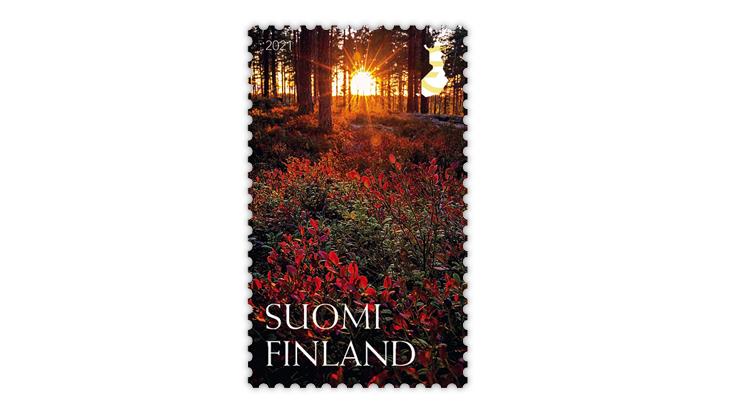 People in Finland voted this fall-themed stamp showcasing a photograph by Jukka Risikko as the most beautiful Finnish stamp of 2021. The stamp was issued Sept. 8 in a pane of five with five different designs. 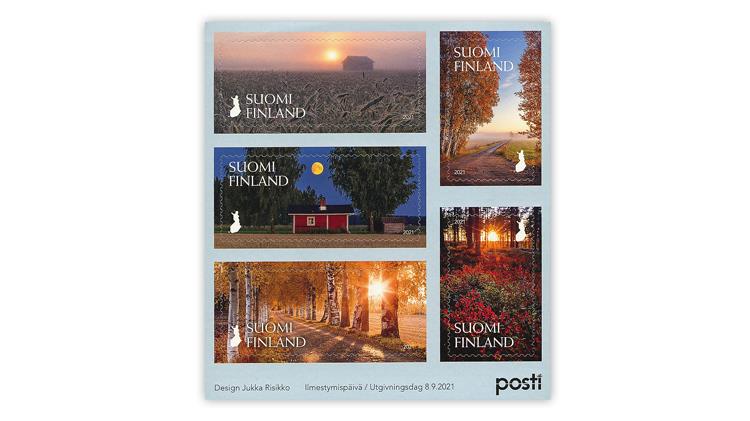 This pane of five called Glimmer of Fall includes the winner of Finland’s popularity poll for 2021 stamps, as well as the designs that finished second and ninth in the poll.
Previous
Next

Two stamps showing photographs that capture the colors of autumn topped the popularity poll to select Finland’s most beautiful stamp of 2021. The poll was conducted by Posti, Finland’s postal and logistics provider.

The stamps were issued Sept. 8, 2021, in a pane of five called Glimmer of Fall. The first-place stamp is shown nearby as a single and in the lower right in the pane of five. It received 4,060 of the 49,049 votes cast in the poll, according to Posti.

Second place, with 3,717 votes, went to the horizontally formatted stamp featuring beech trees at sunset. This stamp is in the lower left of the pane. Also placing in the top 10, at ninth, was the stamp above it depicting a scene on a moonlit night.

Jukka Risikko took the photos that appear in the Glimmer of Fall pane, which was designed by Stiina Hovi.

Posti said: “With his photographs, Risikko wants to relay the calming effect of nature. He takes photographs in the countryside and forests of his home region of Lapua, and he hopes to increase people’s appreciation for the environment and nature near their homes with his photos.”

Posti promised, “More of Risikko’s landscape photography will be featured on stamps in the future.”