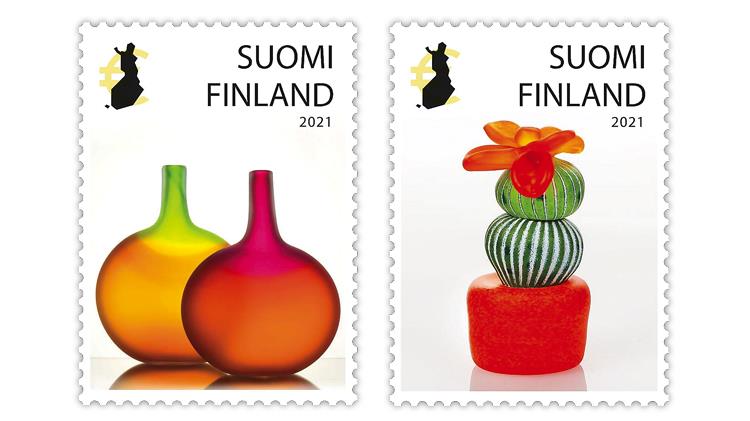 Finland’s post office, Posti, has granted its stamp art promotion award for 2021 to glass artist Alma Jantunen. Her glass sculptures will be featured on two Finnish stamps to be issued Sept. 8. 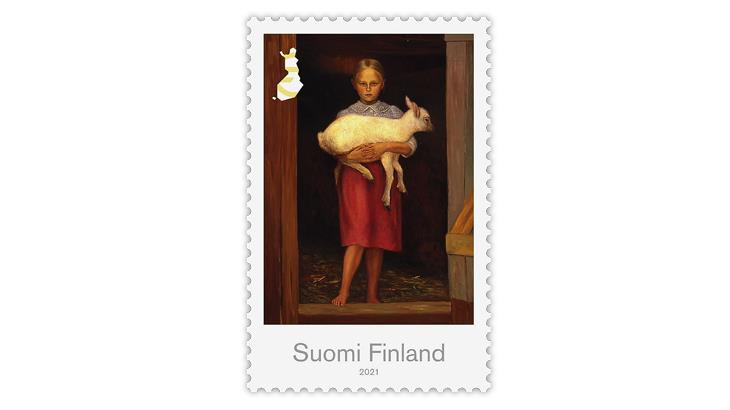 Sheep Girl by Hugo Simberg is one of eight classic Finnish paintings to be featured on a Sept. 8 stamp set. 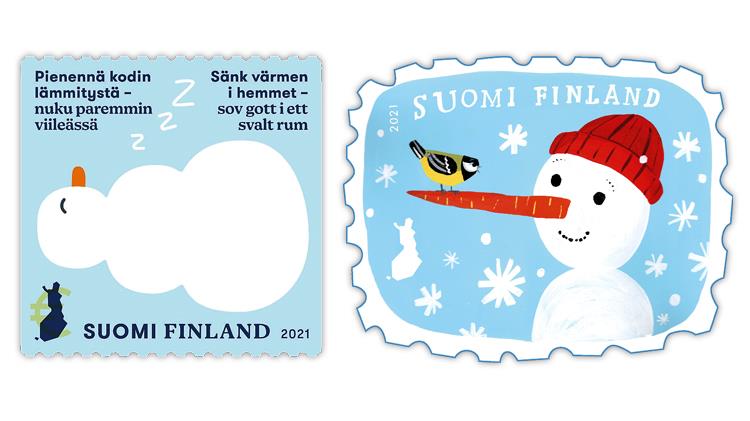 Upcoming Finnish stamps will picture two snowmen. A sleeping snowman illustrates the message of reducing the heat at home on a stamp in the Everyday Green Acts set of six to be issued Sept. 8. A bird has landed on the carrot nose of the snowman shown on one of two First Snow stamps to be issued Nov. 3.
Previous
Next

Finland’s post office, Posti, recently announced that it will issue 26 stamps in the second half of its 2021 program. For information on the first half of the stamp program, see the report in the Dec. 14, 2020, issue of Linn’s.

Stamps with Christmas and winter themes will be released Nov. 3.

All of the stamps are nondenominated, and, unless otherwise noted, they pay the domestic letter rate.

Posti announced April 14 that glass artist Alma Jantunen had won its stamp art promotion award for 2021. As part of the award, her glass sculptures Fruit Bottles and Cactus Pigga will be featured on Finnish stamps.

According to the press release about the award, its purpose is “to raise the status of stamps and art and increase people’s appreciation of them.”

Tommi Kantola, the Posti design manager in charge of stamp production, said: “Over the years, our stamps have presented a lot of Finnish design, and Alma Jantunen’s pieces are a perfect addition to this series. Alma is a gifted artisan whose unique and colorful pieces add a touch of luxury to everyday life, now in stamp format as well.”

The Art Award stamps will be sold in a sheet of 10 (five of each design).

According to Posti, the photos “all show light in the early morning or late in the evening, which brings out the colors of nature beautifully.”

Risikko said: “I hope that, through my photos, people’s appreciation for the environment and the nature near their home could increase. Hopefully my photos will also be able to convey the calming effect of nature.”

Eight Finnish paintings from the period between 1884 and 1930 will be presented on a roll of 100 coil stamps: Echo (1891) by Ellen Thesleff, Boys Playing on the Shore (1884) by Albert Edelfelt, Skaters near the Shore of Kalela (1896) by Akseli Gallen-Kallela, The Convalescent (1888) by Helene Schjerfbeck, Landscape from Koli (1930) by Eero Jarnefelt, Winter Fishing (1900) by Juho Rissanen, Sheep Girl (1913) by Hugo Simberg, and The Fighting Capercaillies (1886) by Ferdinand von Wright.

The set of six Everyday Green Acts booklet stamps offer simple tips for taking the environment into account in our lives.

“The tips have to do with plant-based eating, exercise, heating one’s home, recycling, water use and public transport,” Posti said.

The stamp representing the reduction of home heating shows a snowman sleeping. A snowman also is included on a stamp to be issued Nov. 3 in a set of two called First Snow. That snowman has a bird perched on its carrot nose while snowflakes fall around them.

The other stamp in the First Snow set depicts a dog catching snowflakes on its tongue while a bird is perched on a branch nearby.

Posti says that these two stamps suitable for winter greetings will be issued as a 10-stamp sheet (five of each design).

A Eurasian bullfinch is pictured on the stamp for the Christmas greetings rate, a symbolic spruce Christmas tree is shown on the domestic-rate stamp, and the northern lights are featured on the international-rate stamp.

Posti reports that its program for the second half of 2021 is tentative and subject to change.