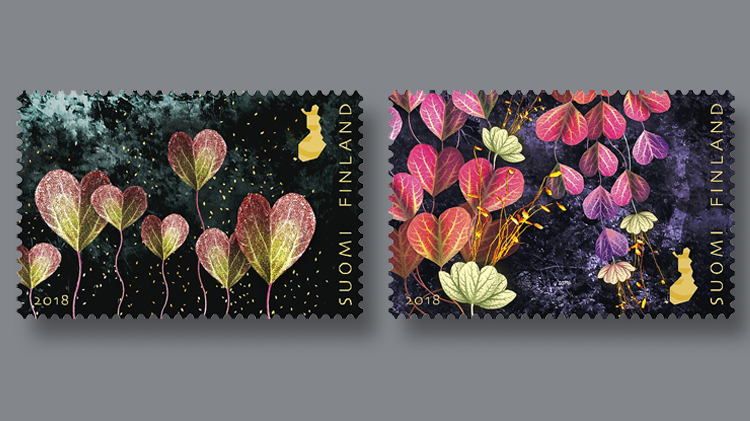 The leaves are heart shaped on these two Finnish Light of Friendship stamps issued Jan. 24 for use on Valentine greetings. 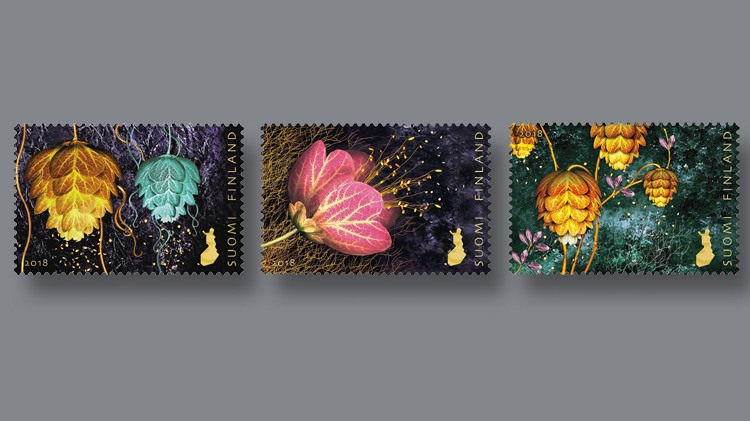 The map in gold on Finland’s Light of Friendship stamps indicate that the stamps pay the domestic rate. Leena Raappana-Luiro designed the issue.
Previous
Next

The designer of the latest Valentine’s Day stamps from Finland was inspired by nature, art and fairy tales in creating the illustrations.

Leena Raappana-Luiro, the designer, said: “The creative process just carried me away, and I noticed that I am reaching for a mystical, dramatic and, at the same time, magical feeling. The vegetation of the fairytale forest is formed by hearts, which glow against the dark background.”

“Even though I’ve created the illustrations digitally, I took inspiration from art history,” she added. “I admire the Dutch flower painting of the 17th century and old natural science illustrations.”

Two of the stamps prominently feature leaves that are shaped like hearts. The gold map in the lower right corner of one stamp and in the upper right on the other represents that the stamps pay the domestic rate.

The other three stamps also include the map in gold.

Joh. Enschede of the Netherlands printed the stamps by offset in booklets of five (one of each design).

Raappana-Luiro had placed second in a design contest for Finland’s Valentine’s Day stamps of 2017. While she did not win that competition, Finland Posti liked her work so much they asked her to design this year’s issue.