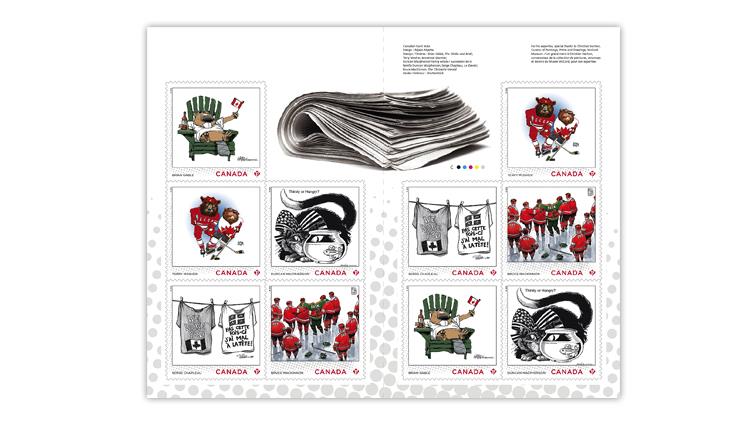 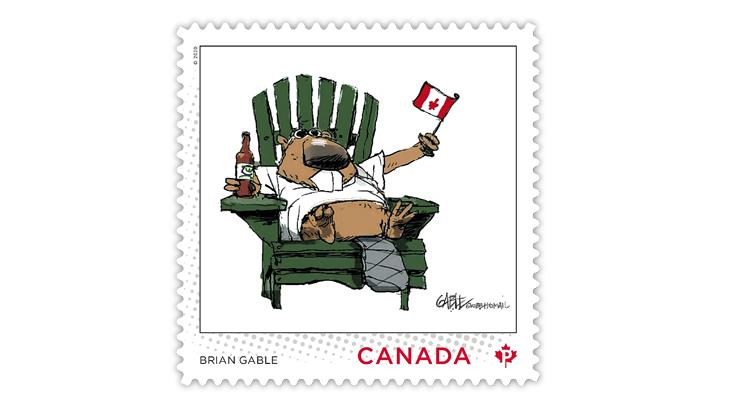 The Canadian stamp honoring Brian Gable of the Globe and Mail shows Canada as a friendly beaver with a bottle of beer in one paw and the Canadian flag in the other. 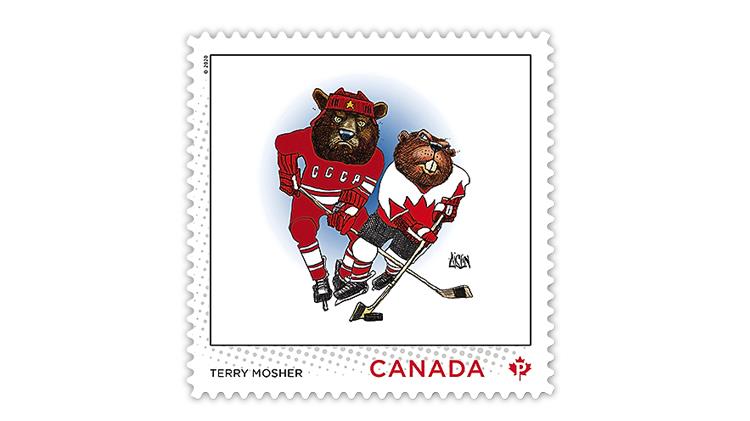 The stamp for Montreal Gazette cartoonist Terry Mosher depicts an editorial cartoon he created for the 1972 Canada-Soviet Union ice hockey series known as the “Summit Series.” 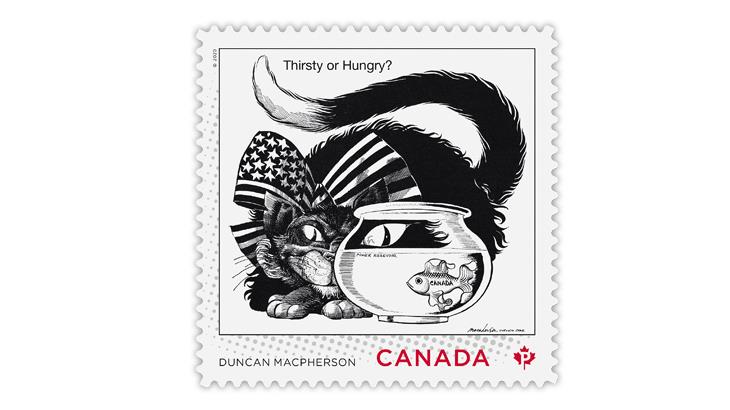 Duncan Macpherson (1924-93), who worked for the Toronto Star for more than three decades, is represented on this stamp by his 1979 cartoon titled “Thirsty or Hungry?” The cartoon portrays the United States as a cat and Canada as a goldfish. 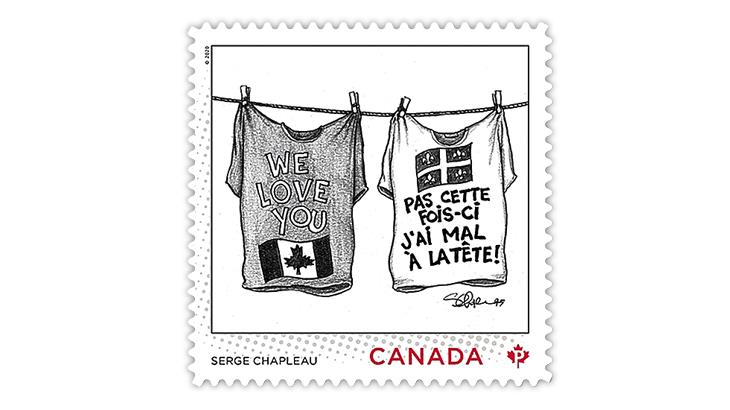 The stamp commemorating Serge Chapleau of La Presse pictures a cartoon he drew in response to a 1995 referendum on whether or not Quebec should declare sovereignty. 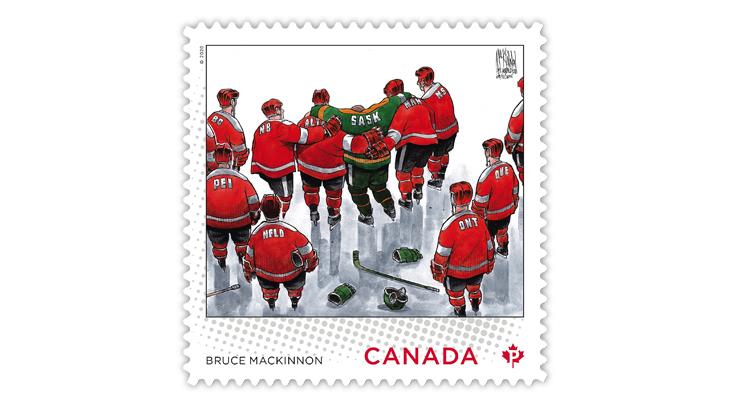 A tribute to hockey players that were killed or injured in a 2018 bus crash is illustrated on the stamp honoring Chronicle Herald cartoonist Bruce MacKinnon.
Previous
Next

Canada Post issued the five stamps Oct. 8 after revealing the designs one day at a time starting Oct. 4.

Canada Post noted that all five were members of the Order of Canada and had all won numerous industry awards.

In a press release announcing the stamps, Canada Post said: “The five award-winning cartoonists, each honoured with their own stamp, are some of our country’s best journalists and storytellers. Their powerful drawings have been important fixtures in some of Canada’s most prominent and influential newspapers for decades.

“Armed with pencils, ink and razor-sharp wit, these editorial cartoonists have boiled down complex issues into a single image — providing pointed commentary on important domestic and world events. Challenging the status quo and tackling controversial subjects head-on, their work has transcended politics and played an important role in upholding Canadian democratic freedoms.

“These talented Canadian artists have made us laugh, reflect and cry with cartoons that tap into the emotions of a country. Their combination of humour and art have enlightened and entertained us, contributed to national debate, and brought attention to unfairness and injustice.”

Rejean Myette designed the stamps. Canadian Bank Note printed them by five-color lithography in booklets of 10 (two of each design). A total of 160,000 booklets were printed.

The first stamp on the left side of the booklet pane features Brian Gable’s cartoon showing a Canadian beaver relaxing in a Muskoka chair with a bottle of beer in one paw and a Canadian flag in the other.

In a blog post on Canada Post’s website, Gable described the beaver as an image “of the little guy,” adding the cartoon represents the spirit of Canada as “being friendly and open to their neighbours across the nation.”

Gable, born in 1949 in Saskatoon, Saskatchewan, has been the editorial cartoonist for the Globe and Mail for more than three decades.

Continuing on the left side of the booklet pane, the second stamp depicts a cartoon drawn by Terry Mosher as part of his coverage of the 1972 Canada-Soviet Union ice hockey series known as the “Summit Series.”

Born in 1942 in Ottawa, Ontario, Mosher works under the pen name “Aislin.” In addition to being the political cartoonist for the Montreal Gazette for more than 50 years, he also has contributed drawings to publications in the United States and elsewhere.

The third stamp shows Duncan Macpherson’s 1979 cartoon titled “Thirsty or Hungry?” In the cartoon, the United States is portrayed as a cat peering at a goldfish labeled “Canada” swimming in a fishbowl.

Born in Toronto, Ontario, Macpherson worked for the Toronto Star for most of his career.

In its blog post, Canada Post said, “Duncan Macpherson is considered a giant of Canadian editorial cartooning. His witty cartoons challenged authority and tapped into public sentiment on domestic and world events while Macpherson himself helped reshape the trade for a generation of cartoonists.

“Among several firsts throughout his career, Macpherson was the first editorial cartoonist to be invested into the Order of Canada, in 1988. ‘With a flick of his pen he can draw a general truth from a seemingly trivial incident, bringing laughter or groans, but never indifference,’ observed the Office of the Governor General.”

Illustrated on the fourth stamp is a cartoon drawn by Serge Chapleau in 1995 in response to a referendum on whether or not Quebec should declare sovereignty. By a narrow margin (50.58 percent), the citizens of Quebec voted to remain as a province of Canada.

Chapleau’s editorial cartoon shows two T-shirts hanging on a clothesline with “We Love You” and Canada’s maple leaf flag on one shirt and “Pas cette fois-ci j’ai mal a la tete!” (French for “Not this time, I have a headache!”) and Quebec’s fleurs-de-lis flag on the other.

Chapleau was born in Montreal, Quebec, in 1945, and became the cartoonist at that city’s French-language newspaper, La Presse, in 1996. In addition to his editorial cartoons, he made people laugh with the portrayal of the character Gerard D. Laflaque (first as a puppet then through animation) on a television series aired on Radio Canada from 2004-19.

The cartoon by Bruce MacKinnon on the fifth stamp represents grieving after a tragedy, a 2018 bus crash that killed 16 people including players and others associated with the Humboldt Broncos, a junior ice hockey team of Humboldt, Saskatchewan.

Canada Post’s blog article said, “When an entire country is shocked, upset or grieving, cartoonists shoulder a different kind of responsibility,” and quoted MacKinnon as saying, “You have to make a statement that somehow gets to the heart of that issue in a subtle, nuanced way.”

Born in 1961 in Antigonish, Nova Scotia, he began working for the Chronicle Herald of Halifax, Nova Scotia, as a freelancer in 1985 and was hired full time the next year.

Canada Post has created five first-day covers, one for each stamp. Each cachet features a self-drawn caricature of each cartoonist, and the cancel is a reproduction of his signature.