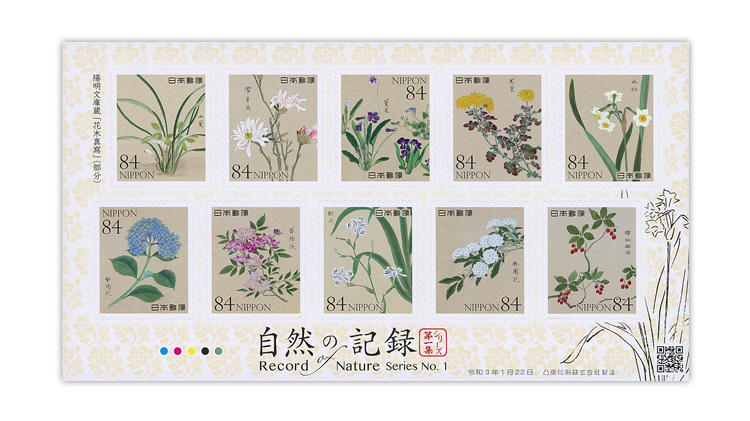 A new stamp series from Japan will depict natural items from a scientific point of view. The first pane of 10 stamps shows carefully detailed flower illustrations dating back three centuries.

Japan Post’s first issue in its Record of Nature stamp series features delicate illustrations of flowers crafted during the early years of the country’s Edo period (1603-1868).

The small pane of 10 stamps issued Jan. 22 showcases artwork by Konoe Iehiro (1667-1736), a noble in the imperial court who was the 21st head of the Konoe household.

The stamp pane is described by Japan Post as issue No. 1 in the new Record of Nature stamp series.

The series will present artwork with a scientific perspective to depict items of natural origin.

Rika Hoshiyama designed the first stamp pane, which was created in consultation with Koichi Igarashi of the Osaka University of Arts.

Each stamp is denominated 84 yen, the price of mailing a standard-size domestic letter weighing up to 25 grams (about 0.88 ounces).

The stamps are self-adhesive, arranged in two horizontal rows of five.

In a news release announcing the issue, Japan Post described each of the flowers depicted on the individual stamps.

The top row begins with the stamp at left depicting perennial spring orchids, which bloom on the ground in sunny areas from March to April.

Next is the magnolia variety known in Japan as shidekobushi, which also blooms from March to April, but as part of a tree that grows close to 10 feet tall.

“The open appearance of thin petals is reminiscent of the paper shide [zigzag-shaped streamer] used in Shinto rituals, so it is called Magnolia stellata,” according to Japan Post.

The third stamp in the top row shows the dark purple sumire variety of violet that blooms from March to May.

Next is the kangiku, or chrysanthemum, which blooms in December and January. The illustration from Makoto Hanaki shown on the stamp illustrates how the leaf color can change when exposed to frost, Japan Post said.

At far right in the top row is the fragrant narcissus, which blooms from December to March.

The lower row of stamps begins at left with the hydrangea, a flower that has been loved in Japan for a long time, Japan Post noted. The large delicately hued flower blooms during June and July on a deciduous shrub that can grow to 6 feet tall.

The second stamp in the bottom row is the Bodhisattva rose, believed to have been cultivated from roses growing wild in China, with flowers that bloom in May and June.

In the center of the bottom row is the blackberry lily, which grows best in shady, damp areas. Its flowers, which resemble whitish purple irises, bloom from April to May.

A deciduous flowering shrub known as kodemari or spirea is featured on the fourth stamp in the bottom row.

“From April to May, so many white flowers gather and bloom that the leaves and thin branches disappear,” Japan Post said.

The final stamp at lower right shows the small magenta bloom of the yoraku azalea, a deciduous shrub that grows in the mountains and blooms from May to June.

A line sketch in black in the pane margin at lower right shows another view of the narcissus.

Additional information about new issues of Japan can be found in the online shop of Japan Post (in Japanese) and from select dealers of worldwide new issue stamps.