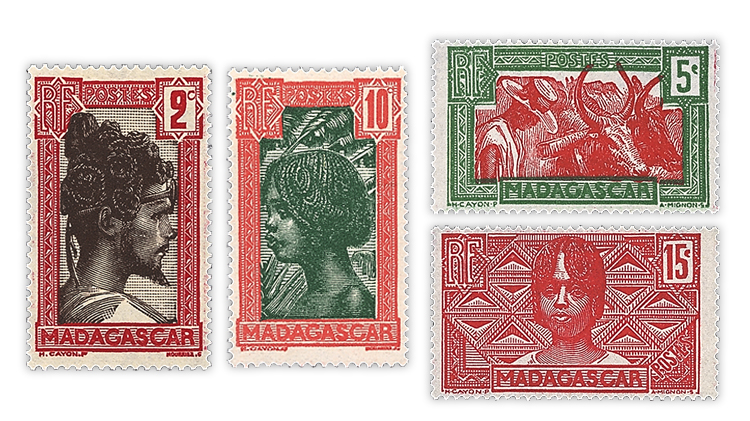 The 1930-44 French colonial Madagascar set of 23 pictorial definitive stamps is a good buy at up to full Scott Classic Specialized Catalogue of Stamps and Covers 1840-1940 values in unused, hinged condition and in used condition.

A former French colony, Madagascar is an island and a country in the Indian Ocean across the Mozambique Channel from East Africa. Madagascar is the world’s fourth largest island, and it is the second largest island nation, exceeded only by Indonesia.

Madagascar drifted away from the Indian subcontinent about 88 million years ago. Its plants and animals developed in isolation for millions of years, producing species found nowhere else.

France gained control of the island by conquest in 1895. It remained a French colony until gaining independence in 1960.

We love the long, colorful pictorial definitive stamps issued by most French colonies in the 1930s. A full set makes a great display on an album page. Many of the sets are relatively inexpensive and available to most collectors.

One of our favorites is the set of 23 mostly bicolor stamps issued by Madagascar from 1930-44 (Scott 147-168). The stamp designs feature a Sakalava chief, a Hova woman, a Hova man with oxen, and a Betsileo woman.

The Scott Classic Specialized Catalogue of Stamps and Covers 1840-1940 values the set at just $27.75 in unused, hinged condition and $17.25 in used condition. The set in very fine grade without faults or defects is a great buy at up to full catalog value. Sets in mint, never-hinged condition bring a nice premium.

Muscle Cars panes of 20 in demand