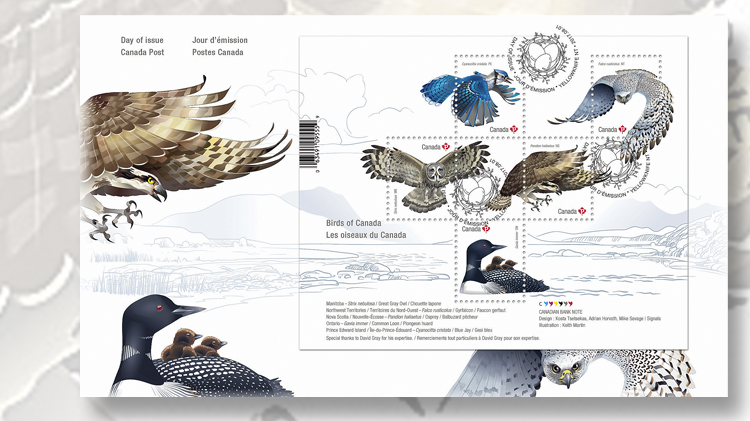 Perforated five-stamp Birds of Canada souvenir sheets with moisture-activated gum show the complete image of each bird, and are tied to Canada Post first-day covers by a first-day postmark from Yellowknife, Northwest Territories, showing a nest with a clu 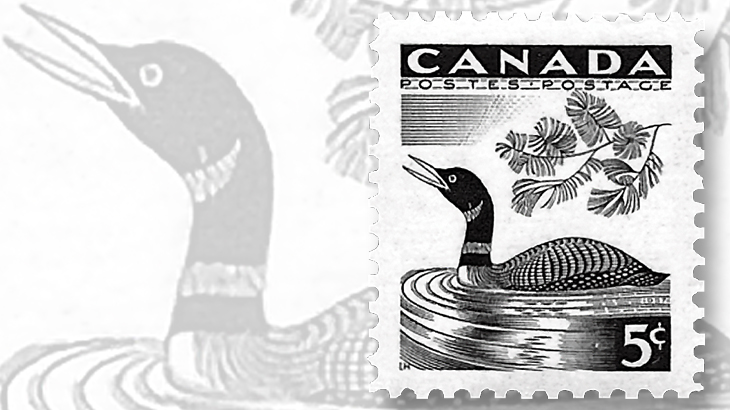 The common loon has made several appearances on Canadian stamps. The first of these was in 1957. 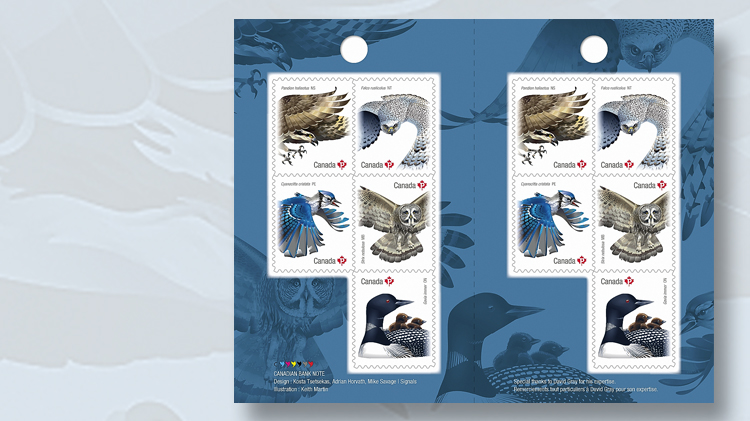 The Birds of Canada booklet contains two panes of the five different self-adhesive, die-cut, permanent-rate stamps in the set being issued Aug. 1. 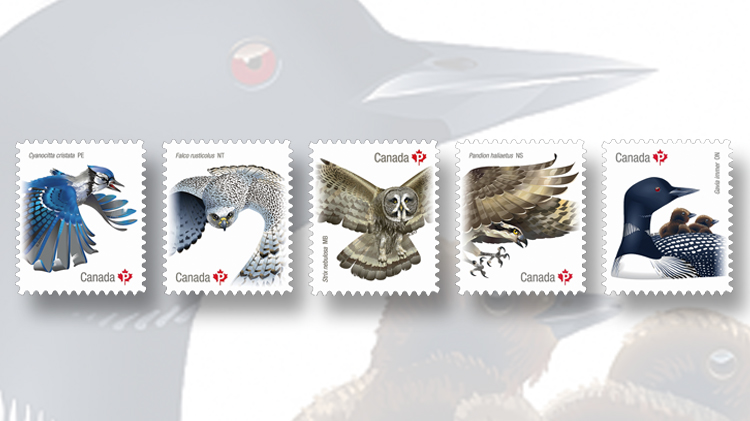 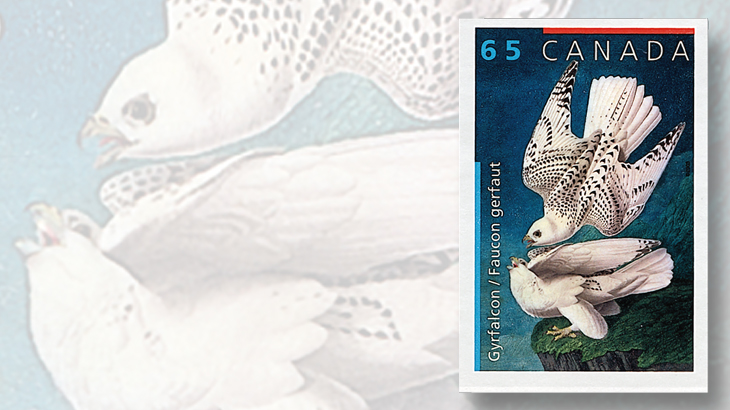 John James Audubon’s painting of a gyrfalcon is featured on a 65¢ stamp issued in 2003.

Canada Post issued a stamp in 2001 showing the logo of the Toronto Blue Jays and commemorating the 25th anniversary of that baseball team. 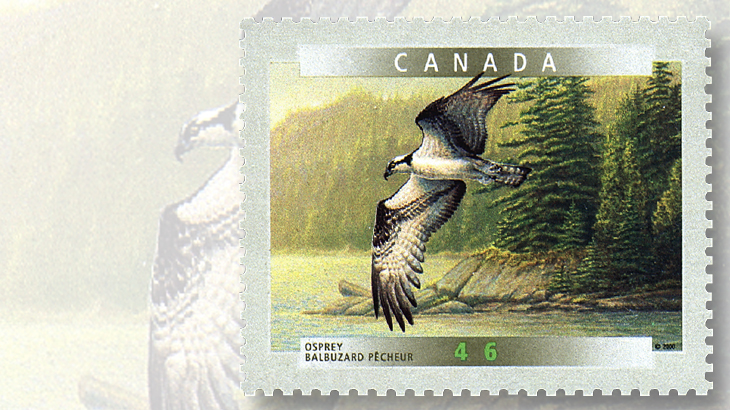 Sometimes called the fish eagle, the osprey is pictured on this stamp issued in 2000, part of a previous Bird series.
Previous
Next

The Signals Design Group has crafted Canadian stamps since at least 2009, including this year’s Star Trek: Year 2 stamps issued April 27 (Linn’s, May 22, page 12).

“I was fascinated by the subtleties in their wing feather patterns,” Martin told Canada Post. “Their nuances make each bird unique and beautiful.”

As on last year’s stamps, the designers avoided elements that would detract in any way from the birds, which accounts for the absence of typical stamp elements such as background illustration and elaborate frames.

Aside from “Canada” and the maple-leaf “P” designating them as paying Canada’s domestic letter rate (currently 85¢), the backgrounds include only the scientific name and two-letter abbreviation for the province or territory of which it is the official bird.

The blue jay is the smallest of this year’s birds for the smallest Canadian province, Prince Edward Island, chosen by a province-wide vote in 1976.

A member of the crow family, the blue jay shares their intelligent, aggressive nature. It is readily identified by its distinctive blue, black, and white plumage and the grating, raucous call with which it greets all comers.

The blue jay is at home year-round in nine Canadian provinces, and its breeding range includes northeastern British Columbia as well.

Ontario’s provincial bird, the common loon is found throughout Canada and the United States, as well as Iceland, coastal Greenland, and northern Eurasia, where its common name is “diver” for its skill in catching fish underwater.

As graceful as it is on a lake, or flying at speeds that can top 70 miles per hour, the location of the loon’s legs at the back of a heavy breast make it slow and ungainly on land.

The gyrfalcon became the official bird of Canada’s Northwest Territories in 1990. The Legislative Assembly of the Northwest Territories describes this omnivorous raptor as “the largest and most magnificent of the falcons,” noting that it “breeds throughout the tundra, including all the Arctic islands.”

The description on the website continues: “Gyrfalcons usually winter in the North and during that season can be found anywhere in the Northwest Territories. … They are expert hunters, and extremely fast and powerful fliers.”

The gyrfalcon was previously depicted in 2003 on a Canadian 65¢ John James Audubon’s Birds stamp (Scott 1983).

Nova Scotia made the osprey its official bird in 1994. Also known as the fish eagle, fish hawk, and sea hawk, the osprey is unusual because it is a single species that lives in coastal regions on every continent but Antarctica, with only slight variations worldwide.

These superb hunters mostly dine on fish of every kind up to 4½ pounds, although they too are omnivores as opportunity or necessity dictates.

One of the world’s largest owls with a wingspan up to 51 inches, Manitoba’s great gray owl also is found in every province and territory from Ontario to the Pacific Ocean, and with a northerly range across Eurasia from eastern Siberia to Finland.

A peerless predator, this owl is known throughout its global range by at least half a dozen different names, including “phantom of the north.”

It dines chiefly on small rodents, consuming about 2,550 per year. It is the only one of this year’s five official birds not previously depicted on a Canadian stamp.

The Birds of Canada stamps are sold in self-adhesive, die-cut booklets of 10 as Canada Post order number 414051111; and in souvenir sheets of five with moisture-activated PVA gum, order number 404051145.

On the souvenir sheet, the complete body of each bird extends through the perforations and onto the selvage between stamps, rather than fading out at the edges of the stamp design on the booklet singles.

Canadian Bank Note printed these stamps by six-color offset lithography. A total of 400,000 booklets and 110,000 souvenir sheets were printed.

The cachet shows enlargements of an osprey, loon, and gyrfalcon, and the first-day cancel depicts a bird’s nest with three eggs from above.

The cancellation site is Yellowknife, Northwest Territories, on the northern arm of Great Slave Lake, a popular jumping-off spot for High Arctic birdwatchers.

Nondenominated picture postal cards paying the international rate for any destination in the world are being issued in sets of five.

Each card displays an image of the entire bird from which the stamp designs were taken. The postal cards (Canada Post order number 262468) are priced at $12.50 per set.