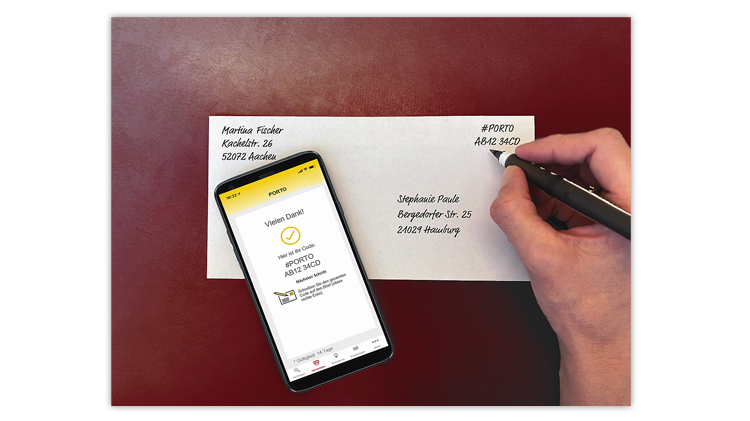 A publicity photo from Deutsche Post shows a handwritten code that can be used in place of a postage stamp on domestic letters and postcards. This code, expected to be introduced before the end of this year, will replace a similar but costlier code available through a service called Handyporto. Germany has no plans to stop issuing stamps. 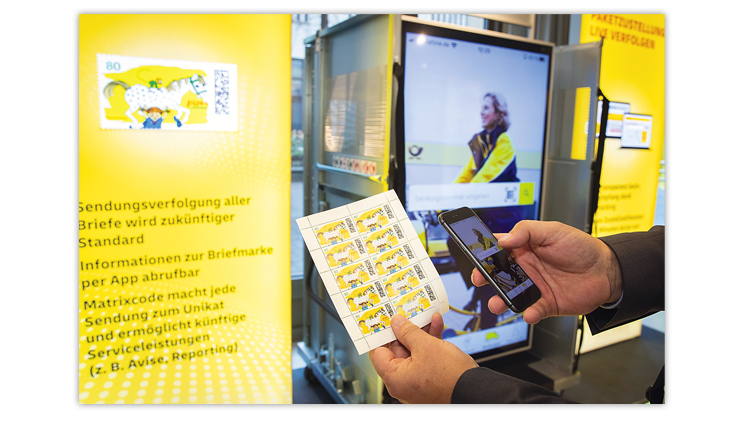 Another publicity photo from Deutsche Post uses a mock-up of its 2019 €0.80 Pippi Longstocking stamp pane to demonstrate a code that it plans to add to stamps. Called a “matrix code,” it is designed to make it easier to track letters, to prevent counterfeiting and reuse of stamps, and to present additional information about the stamp’s subject.
Previous
Next

The Deutsche Post DHL Group may soon make it easier and cheaper to use a handwritten code in place of a postage stamp on German domestic mail. However, Germany has no plans to stop issuing stamps and in fact has announced plans to add a special code to them as well.

The information about the two codes was included in a March 3 press release from Deutsche Post about new digital services and improvements designed to “make it easier for its customers to send, receive and track letters and parcels.” Deutsche Post also held a news conference in Berlin on March 3.

The use of a handwritten code in place of a stamp on German mail is not new. In 2008 Deutsche Post introduced a system called Handyporto through which cell phone users could receive such a code via text.

The Handyporto system includes fees, and the cost for the service is more than the equivalent postage stamp. For example, the domestic letter rate in Germany is 0.80, but a customer would pay 1.20 for the same service using a Handyporto code.

According to the March 3 press release, Deutsche Post will replace Handyporto by the end of this year with what it calls “mobile stamps.” There will be no extra fees or costs involved with this service. In other words, it will cost the same as the price of a postage stamp.

Deutsche Post explained how the new system will work: “ … customers simply have to request the postage they need using the app and pay online, then they receive a multi-digit alphanumeric code, which they have to write by hand on the top right of the postcard or envelope instead of a stamp.”

The postal customer then will place the letter or postcard in a mailbox for normal delivery.

According to a March 3 report from the Reuters news agency, Meyer said: “It is a question of generation. We still believe classic franking will remain the significant majority.”

Deutsche Post is calling the new code to be added to postage stamps a “matrix code.” The purpose of the code is to allow for better tracking of mail items. Other benefits would include preventing the counterfeiting and reuse of postage stamps and supplying additional information to stamp collectors.

The press release said: “The franking with matrix code is also tamper-proof and ensures that postage stamps cannot be used multiple times. Counterfeiting, washing and reusing postage stamps is a massively growing problem for Deutsche Post and other postal companies.”

As for how stamp collectors could use the code, the release said: “ … a further link is provided on the Internet, via which the mail customers receive information on the motif of the stamp in addition to the data for tracking the shipment. Deutsche Post is already conducting initial talks with the Federal Ministry of Finance as the publisher of postage stamps in Germany.”

The Deutsche Post publicity photo for the matrix code shows a postal customer holding a cell phone in one hand and a pane of 10 stamps in the other. Each stamp in the pane has a matrix code on the right side. The design of the 2019 0.80 Pippi Longstocking stamp (Scott 3138) was used in this mock-up; the issued stamps do not include the code.