A souvenir sheet from Royal Mail depicts six vehicles from the Star War film series against an illustration of the Death Star. 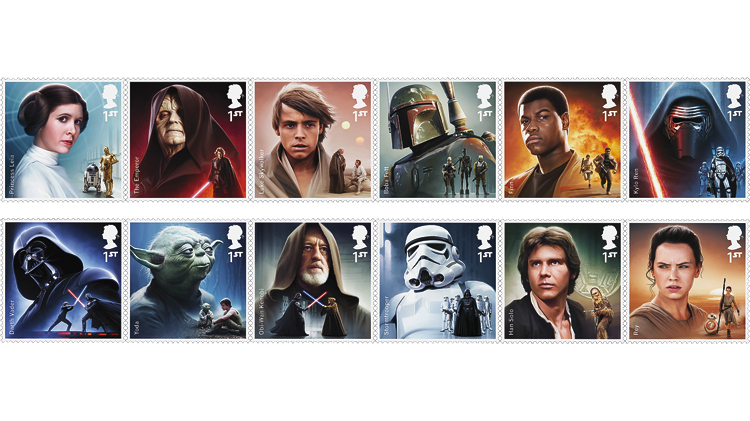 Royal Mail will issue stamps Oct. 20 celebrating Star Wars and the release of the new film in December. Twelve actors from the film series are featured on these stamps. Secondary scenes also are included on each design.
Previous
Next

Twelve of the stamps feature characters from the Star Wars  film series, and the other six picture vehicles and spaceships.

Numerous living people are shown on the stamps, including Harrison Ford as Han Solo, Mark Hamill as Luke Skywalker and Carrie Fisher as Princess Leia, all from the original Star Wars film, which debuted in 1977. The three actors will reprise their roles in Star Wars: The Force Awakens, scheduled for worldwide release Dec. 18, according to the Star Wars website.

Also shown on the stamps are Rey, Finn and Kylo Ren from the upcoming film, and other classic characters, including Darth Vader, Yoda, Obi-Wan Kenobi, the Emperor, Boba Fett and a stormtrooper.

Royal Mail reported that British artist Malcon Tween, who illustrated the stamps, placed a secondary character or scene in each design.

Even the “1st” (used to indicate that these nondenominated stamps pay the first-class rate) reflects the Star Wars theme, replicating “the iconic font used for the films,” according to Royal Mail.

The souvenir sheet with the six stamps showing the “Millennium Falcon,” X-wing fighter and TIE fighter and other vehicles, features a backdrop of the Death Star.

The United States previously issued stamps featuring characters from the films. This pane of 15 was issued May 25, 2007, to mark the 30th anniversary of the premiere of Star Wars (Scott 4143).

In announcing the upcoming stamps, Royal Mail said: “The Star Wars series began in 1977. So far, there have been two trilogies of movies that have included major British involvement at UK studios. 17 December 2015 will see the UK theatrical release of the latest instalment in the Star Wars saga, Star Wars: The Force Awakens, which has been filmed at Pinewood Studios, Buckinghamshire, using British expertise in cast and crew. The two further episodes in this trilogy will also be filmed in the UK.

“Disney’s decision to base production in the UK is a major contributor to the British film industry. Not only is it providing employment and exposure for British acting talent, it also employs the British technical expertise in set design, cinematography, and costume design at Pinewood Studios. In the field of digital special effects, London is already a world centre, and the effects for the new Star Wars film have been created by the London office of Industrial Light & Magic (Lucasfilm’s special effects company).

"The UK is the third largest market in the world for the Star Wars films, and the new stamps will reflect the passion of the British public for the movies, and celebrate the major British contribution to the film.”