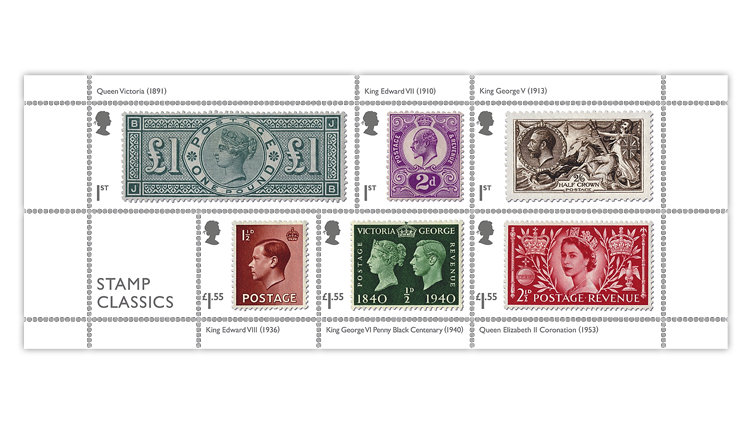 Great Britain’s Royal Mail is paying tribute to the history of its stamps, 150 years of organized philately and the 50th anniversary of the royal opening of one of the world’s finest philatelic museums with a set of six stamps being issued Jan. 15. The set, titled Stamp Classics, also celebrates the reigns of the six British monarchs who have ruled since the world’s first national adhesive stamp, the Penny Black, was issued in 1840.

The stamps honor the 150th anniversary of one of the world’s most prestigious organizations devoted to philately, the Royal Philatelic Society London, as well as acknowledging the 50th anniversary of Queen Elizabeth II’s formal opening of what today is known as the Postal Museum.

The new issues are stamp-on-stamp designs and are organized in an unusual layout by the firm called Hat-trick Design. On a souvenir sheet of six, three stamps across the top row and three stamps and a label across the bottom row fill the same space, but the stamps and the label all differ in size.

A full image of each original stamp, complete with original denomination, is framed on a white field. The only other images on the modern stamps are the familiar silhouette icon depicting Queen Elizabeth II and either a current service inscription or denomination. International Security Printers printed the stamps by lithography.

The stamps will be issued in several formats, including the souvenir sheet, a presentation pack and a stamp sheet. Royal Mail also will sell postcards depicting the stamp images and an uncut press sheet, and will offer two different special pictorial postmarks on first-day covers.

The first acknowledged national postage stamp is the Penny Black, issued in 1840 by Great Britain during the reign of Queen Victoria (who ruled from 1837 to 1901). Adhesive prepaid stamps quickly became an important facet of worldwide communications and have been issued since under five subsequent British rulers: kings Edward VII (1901-1910), George V (1910-1936), Edward VIII (1936) and George VI (1936-1952), plus the present monarch, Queen Elizabeth II, who ascended to the throne in 1952.

The stamps in the top row of the £6.66 souvenir sheet pay homage to the first three monarchs and are denominated at the first-class rate (currently 67 pence).

The classic issues depicted on the souvenir sheet are as follows:

The green £1 Queen Victoria. This was a wide (for its time) horizontal stamp, issued Jan. 28, 1891 (Scott 124), and was an updated version of the original brown lilac £1 of 1884. The ornate style is typical of stamps of the reign, created to prevent forgery. The letter in each corner indicates the row and column of that particular stamp as it appeared on the sheet. The stamp shown has a J at the bottom left and B at bottom right, meaning the stamp would have been in the second column of the ninth row. The letters are repeated in opposite order in the top corners.

The 2-penny King Edward VII. The unissued, and thus extremely rare, stamp in Tyrian plum was originally created in April 1910 to replace a previously issued similar stamp in two colors featuring the king. This single-color stamp would be less expensive to produce, and it was printed and sent to post offices. But when the king died on May 6 most of the stock was destroyed. [Editor's note: See Matthew Healey’s feature article on the Two-Penny Tyrian Plum in this issue on page 36.]

The dark brown 2 shilling 6d King George V. The four high-value stamps issued in 1913 featuring the king and an allegory titled “Britannia Rules the Waves” are popularly known as the Seahorses. Shown on the new stamp is the lowest of these denominations (Scott 173) issued along with the 5sh on June 30, 1913. The 10sh and £1 stamps were issued Aug. 1. Four different printers produced the original stamps, and the work of each is identifiable, according to Royal Mail.

The red brown 1½d King Edward VIII. This stamp (Scott 232) is part of the four-denomination Accession set. This stamp, along with the ½d and 2½d, was issued Sept. 1, 1936, while the 1d was released Sept. 14. The design is based on a speculative concept submitted the previous April by Hubert J. Brown, a 17-year-old student.

The deep green ½d Centenary of the Postage Stamp. This stamp (Scott 252), along with five more in the set, features iconic images of both Queen Victoria and King George VI. Designs were invited in the late 1930s as the Post Office planned to celebrate the centenary of the Penny Black. But when World War II broke out, the concept was abandoned until December 1939, because Postmaster General George Clement Tryon (1st Baron Tryon) felt that the decision had been premature. The king, in consultation with the queen, favored a design by Harold Palmer. The stamps, an unusual size at the time, were issued on the Penny Black centennial: May 6, 1940.

The scarlet 2½d Queen Elizabeth II Coronation. This stamp (Scott 313) was issued the day after the queen’s formal coronation on June 2, 1953. It is the low denomination in a set of four stamps, each with a different design. More than 75 ideas were submitted for the stamps; Edgar Fuller’s design is on the 2½d. The other artists and stamps, by denomination, are Michael Goaman (4d), Edmund Dulac (1sh3d) and Michael Farras-Bell (1sh6d).

The colorful foldout presentation pack is chock full of text and images exploring the designs and information behind the classic stamps associated with each monarch’s reign.

The souvenir sheet and related products are available online from Royal Mail, https://shop.royalmail.com.

The Royal Philatelic Society London (www.rpsl.org.uk), celebrating its 150th anniversary, is the oldest and one of the world’s most prestigious stamp societies. Founded as the Philatelic Society, London on April 10, 1869, the society received permission to use the prefix “Royal” from King Edward VII in 1906.

The society, known popularly among collectors as “The Royal,” claims more than 2,200 members in 60 countries and has historically counted many of the world’s finest philatelists among its membership. King George V was a member, and Queen Elizabeth II is its current patron.

The society has several events planned during its sesquicentennial year. In June, it will open a new headquarters in London.

The society will present “America’s Event” Oct. 17-20 at the Smithsonian’s National Postal Museum in Washington, D.C.

In addition to the Stockholmia 2019 show, the society also will have a presence at shows in Gibraltar (Oct. 21) and Sindelfingen, Germany (Oct. 24-29).

Celebrations will kick off at the Stampex spring show in February in London. Collectors who visit Stampex will have an opportunity to purchase a special overprinted version of the Stamp Classics souvenir sheet. It is only available for purchase at the show. The show logo and the words “STAMPEX INTERNATIONAL/13-16 February 2019” have been overprinted onto the label on 6,000 sheets, with numbering in the bottom left corner.

The National Stamp Museum was established in 1966 in part thanks to the donation of the Phillips collection of Victorian philately. The 46-volume collection was created by Reginald M. Phillips (1888-1977). Queen Elizabeth II opened the British Postal Museum and Archive on Feb. 19, 1969.

The museum was renamed the Postal Museum (www.postalmuseum.org) in February 2016 and opened a new facility in 2017. The £26 million project in two sections includes a 1-kilometer (0.62-mile) stretch of track of London’s Mail Rail, the world’s first driverless electric railway, which visitors can ride.

The museum, a registered charity, has more than 60,000 objects and thousands of records detailing nearly 400 years of postal history. Activities range from serious philatelic research to a play zone for children.