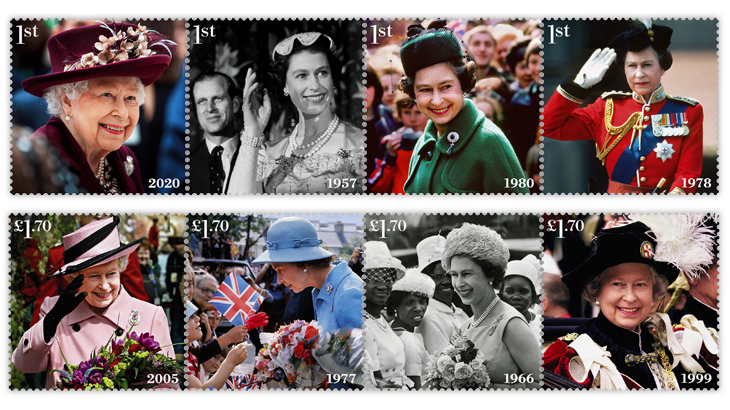 Royal Mail issued eight stamps Feb. 4 in celebration of the platinum jubilee (70-year reign) of Queen Elizabeth II. The queen is the first monarch in the United Kingdom to achieve this milestone.

This is the first time a platinum jubilee has been celebrated in the United Kingdom. Elizabeth had already become the longest-reigning monarch on Sept. 9. 2015.

Each of the eight stamps shows a different way in which the queen is dedicated to service.

From a 1957 tour of the United States to a 2020 visit to the headquarters of MI5 (the agency responsible for protecting the United Kingdom against threats to national security), the stamps give a glimpse into different ways the queen has continued to serve through recent history.

“These stamps are a celebration of the second Elizabethan Age and a tribute to a remarkable lifetime of duty and public service,” Royal Mail CEO Simon Thompson said. “We are honoured to be releasing them to mark the occasion of the first Platinum Jubilee in the UK’s history, a momentous occasion.”

While celebrations are scheduled throughout 2022, Accession Day is Feb. 6. The longevity of the queen’s reign draws international significance, as well.

The stamps were designed by Kate Stephens and printed by International Security Printers. They each measure 35 millimeters by 35mm.

Two of the stamps show black-and-white photographs from the 1950s and 1960s. Another features the queen in a baby blue outfit with matching hat in a picture from the 1977 silver jubilee ceremony. One stamp shows the queen in a Scots Guards uniform at the 1978 Trooping the Colour ceremony.

Written by journalist and royal specialist Robert Hardman, the booklet starts with events from 1952 and tracks the queen’s dedication and commitment through the decades.

The booklet contains all eight of the Platinum Jubilee stamps along with an extra pane of definitive stamps and four previously issued stamps.

The silhouette of the queen, which is normally required on commemorative stamps from Royal Mail, is not needed on these stamps because the queen’s image is used in the stamp design. The queen approves all stamp designs before they are issued.

The set of eight Platinum Jubilee stamps, prestige booklet and other collectible materials are available from Royal Mail.