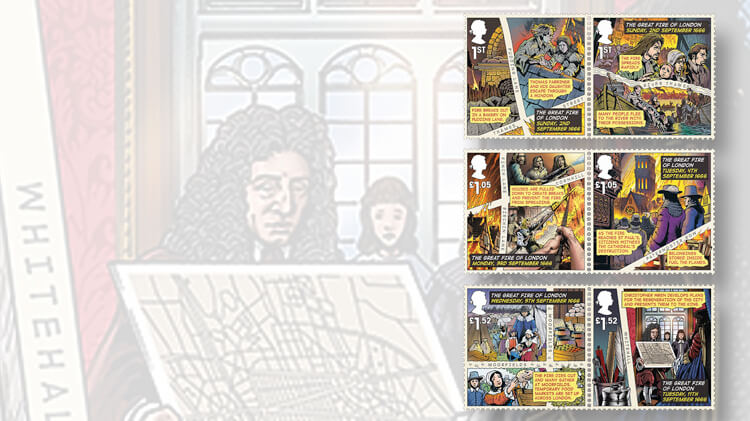 The six stamps in Royal Mail’s Great Fire of London set tell the story of this 1666 catastrophe in the style of a graphic novel. The stamps were issued Sept. 2 in se-tenant (side-by-side) pairs.

Six new stamps from Great Britain’s Royal Mail illustrate the start, spread, and end of the Great Fire of London. The stamps were issued Sept. 2 to commemorate the 350th anniversary of this catastrophe.

Royal Mail said: “In the early hours of Sunday 2 Sept. 1666 a fire breaks out in bakery of Thomas Farriner in Pudding Lane, London. Over the next few days the fire spreads through the city, the close-packed wooden houses, with thatch, stored materials like pitch and tar plus strong westerly wind making a ‘perfect storm.’ ”

The stamp designs are in a “graphic novel style,” according to Royal Mail. In general, graphic novels use comic-book style art and text to tell a story.

Comic book artist John Higgins created the illustrations for the stamps. They were printed in se-tenant (side-by-side) pairs.

Higgins, whose other works include Judge Dredd, 2000 AD and Watchmen, said: “It is an honour to illustrate these stamps and to commemorate this moment in history 350 years on. Capturing the story of the Great Fire of London in just six Special Stamps was a wonderful challenge, I am thrilled to have been chosen to bring the graphic-novel style to Royal Mail’s Special Stamps for the first time.”

This illustrated story of the 1666 fire that destroyed approximately 80 percent of London and left 100,000 people homeless begins on the pair of nondenominated first-class stamps. The stamp on the left shows the start of the fire around 2 a.m. Sunday, Sept. 2, in Farriner’s bakery, including a scene of Farriner and his daughter escaping through a window.

The images are separated by a drawing of the intersection of Pudding Lane and Thames Street. A similar street-map technique is used on all of the designs.

The other first-class stamp depicts the rapid spreading of the fire and people fleeing to the River Thames with their possessions.

Diarist Samuel Pepys (1633-1703) described the scene: “Everybody endeavoring to remove their goods, and flinging into the river or bringing them into lighters that lay off; poor people staying in their houses as long as till the very fire touched them, and then running into boats, or clambering from one pair of stairs by the water-side to another.”

The two £1.05 stamps show the spread of the fire on Sept. 3-4 and efforts made to stop it. On the left-hand stamp, houses are being pulled down to create firebreaks, and three men are using a fire squirt.

On the other £1.05 stamp, the fire has reached Pater­naster Row on Sept. 4, and a crowd watches as the flames engulf St. Paul’s Cathedral, one of more than 80 churches destroyed by the fire.

During the night on Sept. 4, the wind dropped, helping those fighting the blaze. By the morning of Sept. 6, the fire was extinguished, though some areas of London smouldered for another few months.

The aftermath of the fire is illustrated on the £1.52 pair.

The first of the two stamps shows the homeless camping in tents at Moorfields on Sept. 5. Temporary food markets that have been set up around the city also are pictured.

The Chase designed the stamps, using the illustrations by Higgins. International Security Printers printed them by offset in sheets of 60 (sold in panes of 30 at most postal outlets). The stamps are square, 35 millimeters by 35mm, and are perforated gauge 14.5 by 14.5.

Royal Mail’s other products for the Great Fire of London set include first-day covers; a presentation pack with illustrations by graphic-novel artist Leigh Gallagher; and six postcards reproducing the designs of the stamps.