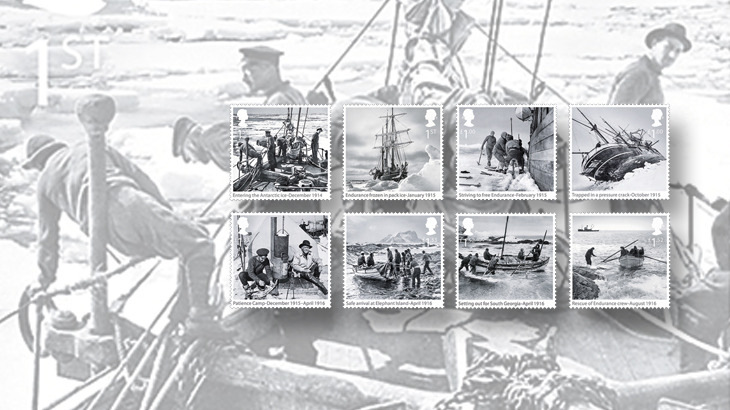 Eight new stamps from Great Britain’s Royal Mail tell the survival story of Ernest Shackleton and the 28-member crew of the Imperial Trans-Antarctic Expedition. The designs are based on photographs by expedition member James Francis “Frank” Hurley.

In 1914, Shackleton and his 28-man crew, including photographer James Francis “Frank” Hurley, set sail in Endurance on an expedition to cross the Antarctic continent.

Although the expedition didn’t reach its goal, it is remembered as one of the greatest survival stories of all time.

The story has been retold in books, films, television specials and in an exhibition organized by the American Museum of Natural History in 1999. The exhibition has since traveled to other cities, most recently to Dublin, Ireland.

In announcing the exhibition, the American Museum of Natural History provided this summary: “Just one day’s sail from the continent, the ship Endurance became trapped in sea ice. Frozen fast for ten months, the ship was crushed and destroyed by ice pressure, and the crew was forced to abandon ship.

“After camping on the ice for five months, Shackleton made two open boat journeys, one of which — a treacherous 800-mile ocean crossing to South Georgia Island — is now considered one of the greatest boat journeys in history.

“Trekking across the mountains of South Georgia, Shackleton reached the island’s remote whaling station, organized a rescue team, and saved all of the men he had left behind.”

The new stamps from Royal Mail start at the beginning. One of the two nondenominated first-class stamps shows Hurley’s photograph of Endurance entering the Antarctic ice.

The stamps are in se-tenant (side-by-side) pairs, and the other first-class stamp shows the ship frozen in pack ice in January 1915.

Two more scenes from 1915 are pictured on the pair of £1 stamps: the crew striving to free Endurance from the ice in February, and the ship trapped in a pressure crack in October.

The first stamp in the £1.33 pair shows Hurley (left) skinning a penguin and Shackleton (right) in front of a tent at Patience Camp, where the crew camped on the ice from December 1915 through April 1916.

On April 9, they left camp and began the voyage in three lifeboats to Elephant Island. Their arrival at this uninhabited island is pictured on the second £1.33 stamp.

Shackleton selected a crew of five and the strongest of the three lifeboats, the James Caird, to cross the Southern Ocean to reach South Georgia, a remote outpost of the British Empire, in hopes of finding rescue for the rest of the expedition members left behind on Elephant Island.

One of the £1.52 stamps shows Shackleton setting out for South Georgia.

After navigating the 800 miles of treacherous seas in the small boat, the six were presented with another challenge.

In its new-issue announcement, Royal Mail said: “Despite appalling cold, they eventually landed on South Georgia, after one of the most celebrated feats of navigation of all time. However, they landed on the uninhabited south side of the island. A final 36-hour non-stop trek across glaciers and mountains led Shackleton to the nearest human outpost.”

After several attempts, a rescue party reached Elephant Island on Aug. 30, 1916. The final stamp shows a scene from the rescue.

Robert Maude and Sarah Davies designed the stamps, using Hurley’s photographs. The Royal Geographical Society (with the Institute of British Geographers) owns the copyright to some of the photographs, as does the Scott Postal Research Institute, University of Cambridge.

Additional Royal Mail products offered in conjunction with the Shackleton and the Endurance Expedition issue include a first-day cover, eight postcards reproducing the designs of the stamps, and a presentation pack. The pack includes mint examples of the stamps, text by polar exploration author Michael Smith, and additional photographs by Hurley.