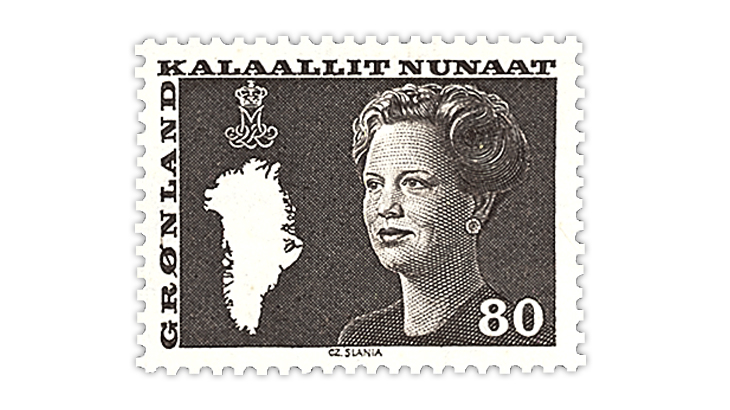 Greenland’s first stamp issue was a set of parcel post stamps from 1905. Later issues have shown Danish monarchs, such as Queen Margrethe II.

Could the United States buy Greenland?

Commentators around the world have been quick to pour (very) cold water on the idea, and the question has led to an unfortunate diplomatic spat between the United States and Denmark, which controls Greenland’s foreign affairs and defense. But the philatelic record shows that such a move would not be without historical precedent.

Almost from the dawn of the republic, the United States has added territory through peaceful purchases from allies. The Louisiana Purchase (from France, 1803), the Gadsden Purchase (Mexico, 1853) and of course “Seward’s Folly,” the purchase of Alaska (Russia, 1867), all contributed to the present-day outlines of our 50 states. Several U.S. stamps commemorate these acquisitions.

Greenland has been controlled by the Kingdom of Denmark since 1814, gradually gaining more and more autonomy in recent decades.

It issued its first stamps in 1905, a large-size set of parcel post stamps showing the squatting polar bear that adorns the territory’s coat of arms. More recent stamps have tended toward well-produced designs honoring local culture and the history of polar exploration.

The country’s name is often given in the Greenlandic Inuit language: Kalaallit Nunaat, meaning “land of the Kalaallit,” the name of its indigenous population, who number about 50,000.

Many of Greenland’s stamps have shown Danish monarchs, from Christian X to Frederick IX to Margrethe II. This may be confusing to some, as it implies that Greenland belongs to Denmark, in the same way the depiction of Queen Elizabeth II on stamps of Canada or Australia suggests those countries still belong to Great Britain. The simple answer is that a monarch can rule more than one country.

Greenland was granted home rule in 1979 and voted to take even greater autonomy in 2008. Today, it is functionally independent in most areas, though it still receives large economic subsidies from Denmark.

Besides the Danish West Indies, Greenland and the Faroe Islands, Denmark at one time also had colonial interests in West Africa and India, giving them up only a few years before the advent of postage stamps; Britain purchased the Danish Gold Coast in 1850.

One legacy of this history can be seen on stamps of Gold Coast featuring Christiansborg Castle, a former fort in what is now Ghana. For many years, the castle served as the seat of government.

One reason for the United States’ desire to purchase Greenland could be strategic. Since World War II, its northeast coast has been home to the U.S. military’s Thule Air Base.

President Truman made a secret effort to buy Greenland for this purpose in the 1940s. Like President Donald Trump, he was rebuffed, but the discussion led to the founding of the North Atlantic Treaty Organization in 1949, an event marked on stamps from many member states.

Other allies were more accommodating to American military plans. In the 1960s, half a world away, Britain evicted the native inhabitants of the Chagos Archipelago in the Indian Ocean so the United States and Britain could build a large military base on Diego Garcia, the biggest of the islands. Although the British Indian Ocean Territory issues stamps, its only inhabitants are the two nations’ military personnel.

A more likely and pressing reason for Trump to want to buy Greenland could be its mineral wealth. Numerous mines on the island offer abundant supplies of rare earth minerals, which are crucial in many areas of high-tech manufacturing, including for defense and renewable-energy purposes. Present supplies of such resources are concentrated in China, presenting both an economic and a strategic risk to the United States.

While the United States may not be able to buy Greenland anytime soon, we can always buy Greenland’s — and other countries’ — beautiful stamps and learn about the rich history and culture they depict.