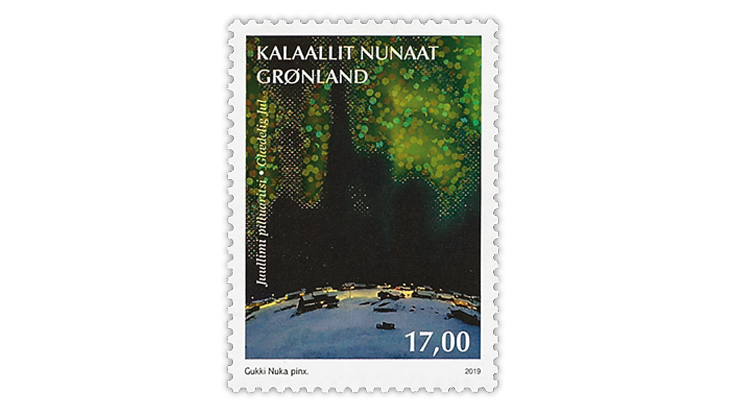 A Christmas stamp from Greenland was voted as that country’s most beautiful stamp of 2019.

A Christmas stamp featuring northern lights was voted as the Greenland stamp of the year in a poll organized by Post Greenland’s philatelic bureau.

Designed by Gukki Nuka, the stamp was printed by Lowe-Martin using a special effect to make the northern lights appear to shimmer. This 17-krone stamp was issued Oct. 21, 2019, along with a 15kr Christmas stamp also designed by Nuka.

In an email message announcing the winning stamp, Post Greenland Filatelia reported that numerous collectors from around the world had voted in the contest, and that each person was entered into a drawing to win one of 11 prizes.

The United States doctor Mark Ravenscraft, who won the top prize, shared the story of how his stamp-collecting father encouraged him and his brother to also collect.

When Ravenscraft was a preteen, his father suggested that he pick a country or area to specialize in. Ravenscraft said that after he expressed an interest in Greenland and Scandinavia, his father “explained on my allowance, that it might be a bit expensive.”

Ravenscraft wrote: “When he passed away 6 years ago I inherited his international album which brought back memories, and I began to browse the Greenland Post site — at that point started a Greenland album, gradually building — with hopes for a fairly complete mint album someday.”

The email, which was sent April 2, also reported that Ravenscraft was actively participating in the U.S. “emergency response in the fight against the spread of coronavirus” and Post Greenland Filatelia wished “him all the best in the ongoing struggle for public health in these difficult times.”