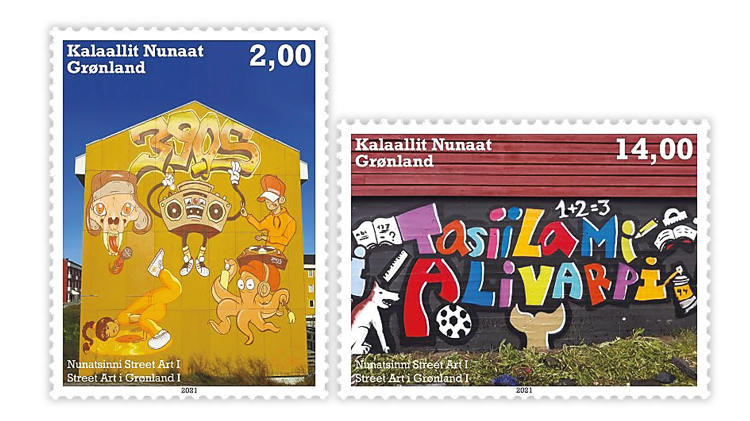 The 2-krone (approximately 30¢) stamp shows a group of characters against a gold background on the side of a building in Nuussuaq.

Most of the characters are engaged in a musical activity. A personified stereo seems to be providing sound, which a human adds to with a turntable. An abstract figure holds a microphone while another human figure break dances. The group also includes an octopus holding spray paint and a paintbrush.

The Nuuk Local Committee commissioned the work. Artist Sacha Malinsky, who goes by the artist name Cheeky, worked in collaboration with local artists to complete it.

“I see a lot of talented artists in Greenland,” Cheeky said, “but I do not see anyone working together on the same canvas, which is a big part of the graffiti community. … It has been inspiring to teach, sketch and work alongside this group of talented artists.”

Stylized text dominates the street art shown on the 14k (approximately $2.10) stamp. The name of a school, Tasiilami Alivarp in Tasiilaq, appears in colorful letters on a section of the school building.

The Youth Culture House in Tasiilaq focused on street art for two weeks in the summer of 2018 to create activities for the community and promote interest in graffiti as an art form.

Graffiti artist Mathias Stenbakken worked with local students and workshop coordinator Camilla Flebo on the art. “I grew up in Tasiilaq,” said Stenbakken, “and this is where I became acquainted with graffiti. It was very special to be here, because I met my old childhood friends and teachers, and I especially loved being able to paint graffiti with the kids here."

Various school-themed images, such as a ruler, textbook and math equation, surround the text. A can of spray paint appears to be finishing the last letter of the school name. A soccer ball is also present and appears to be kept in place by the capital letter A in the name.

A dog and what looks like a whale's tail add another element to the mural that is not school related.

Cartor Security Printing printed the stamps by offset in separate panes of 10. More information can be found on the Tusass website.