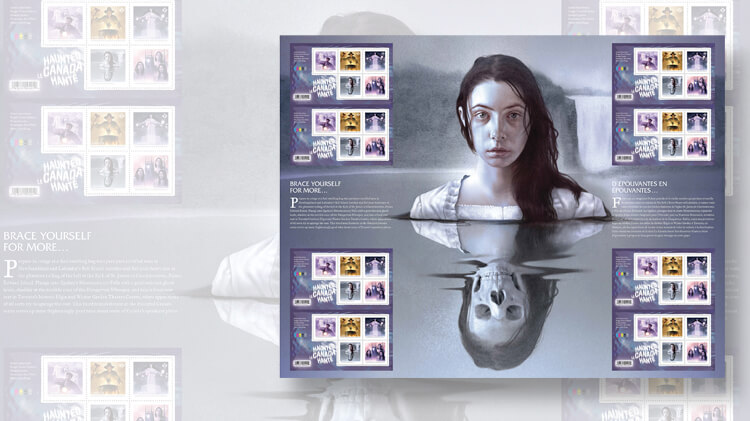 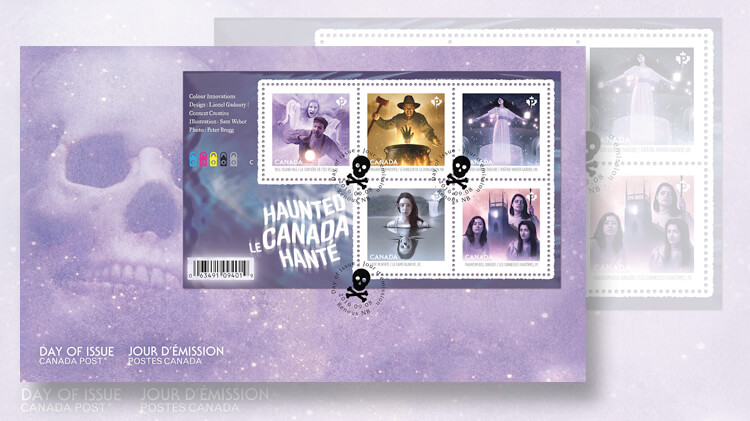 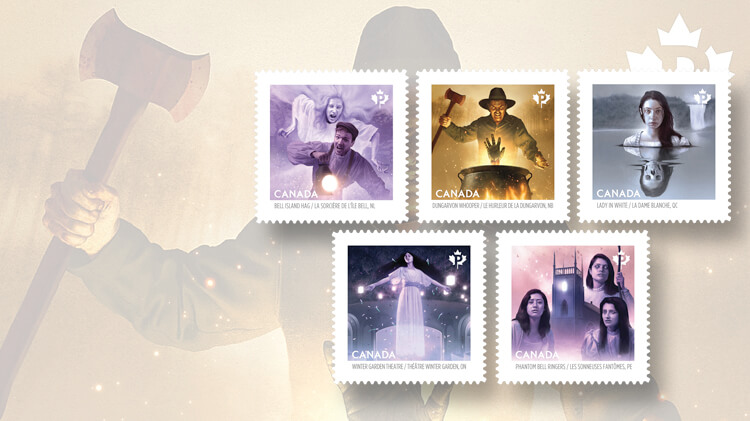 The Haunted Canada booklet stamps issued Sept. 8 showcase horrific histories from Bell Island on Conception Bay in Newfoundland; from a remote tributary of the Miramichi River in New Brunswick’s Appalachian forests; from Montmorency Falls just outside Qu
Previous
Next

“Prepare to cringe at a foul-smelling hag who paralyzes terrified men in Newfoundland and Labrador’s Bell Island marshes and feel your heart race at the phantom tolling of the bell at the Kirk of St. James in Charlottetown, Prince Edward Island. Plunge into Quebec’s Montmorency Falls with a grief-stricken ghost bride, shudder at the terrible cries of the Dungarvon Whooper, and take a front-row seat in Toronto’s historic Elgin and Winter Garden Theatre Centre, where apparitions of all sorts try to upstage the cast. This third manifestation in the Haunted Canada series serves up more frighteningly good tales about some of Canada’s spookiest places.”

On Sept. 8, Canada Post issued these five nondenominated permanent-rate (85¢) stamps in booklets of 10 and souvenir sheets of five with the different designs se-tenant (side-by-side).

“Having been able to delve into 15 of our nation’s most richly nuanced tales and bring them to life with master illustrator Sam Weber has been a thrill like no other,” says Lionel Gadoury, the creative director of Toronto’s Context Creative, who designed the series along with Kammy Ahuja.

“Be prepared for a little scare with these legendary local stories and let your creativity take over,” says Joel Sutherland, author of the children’s series of Haunted Canada books and adviser to the stamp series.

Here in brief are the stories behind the stamps, as described by Canada Post.

“It’s said that many a farmer has been scared witless by the Hag of Bell Island, who appears as a beautiful maiden to lure her prey into the murky marsh before transforming into a horrific (and less-than-hospitable) hag.”

Canada Post also called her a “shape-shifting succubus” with an “overpowering stench of death” that is so strong it leaves her victims powerless.

“According to legend, the cook at a logging camp near the Dungarvon River kept all his earnings in a money belt. When the logging crew returned to camp one day, they found the cook dead and his money missing. The camp boss told the men the cook had died of a sudden illness. As a snowstorm raged that night, the lumberjacks buried the cook’s body in a shallow grave near Dungarvon Springs. Back at camp, the men were shocked to hear hideous screaming and whooping coming from the grave. To this day, the ghostly wails of the slain cook can still be heard in the Miramichi woods.”

“If you’re approached by the Lady in White of Montmorency Falls, don’t touch her gown! The apparition of bride-to-be Mathilde Robin, who plunged to her death over the loss of her fiance at the Battle of Montmorency [in 1759 during a failed British assault on Quebec City in the French and Indian War], still guards the virtue of her wedding dress, meant for his touch alone.”

“Staff and patrons of the Elgin and Winter Garden Theatre Centre on Yonge Street in downtown Toronto have been witness to some spine-tingling appearances from the ghost of a well-dressed Edwardian woman and a musical specter named Sam, who tends to hog the spotlight.”

“In the early morning hours of October 7, 1853, a bell began ringing over Charlottetown. Presuming he was hearing a ship’s bell, a local sea captain walked down to the harbour, where the steamer Fairy Queen was anchored.

“Once there, however, he realized the sound was coming from town, specifically the Kirk of St. James. Seeing as it was too early for services, he set off in the direction of the church to investigate. As he arrived, the bell still ringing out above, he saw three women disappear through the door of the belfry while another looked down from the tower.

“The church sexton had also heard the noise, and rushed to get the church keys. The two men unlocked the door and climbed the tower, but were shocked to find the belfry empty, the bell still vibrating.

“At noon that day, the Fairy Queen departed for Pictou, Nova Scotia. Hours later, word arrived that the vessel had sunk in rough seas and seven passengers had been lost. The chilling twist? Four of the victims were women, three of whom were members of the St. James congregation.”

The 2016 Haunted Canada stamps were printed by Toronto’s Colour Innovations using five-color offset-lithography and holographic foil. The square stamps are 32 millimeters by 32mm.

In addition, 125,000 perforated souvenir sheets measuring 127mm by 73mm with moisture-activated PVA gum have been produced, and are Canada Post product No. 404019145.

The souvenir sheet also was used to frank the official Canada Post first-day cover, which also features a skull floating against a spectral background. Stylized skull and crossbones cancellations appear on the first-day-of-issue handstamps from Renous, New Brunswick, not far from where the Dungarvon Whooper met his grisly fate.

Nondenominated Haunted Canada picture postal cards that can be mailed to any address internationally will be sold individually for $2.50 each, or in a complete set of five online or by mail-order only for $12.50 as Canada Post product No. 262458.

Each of the Haunted Canada picture postal cards has an oversize version of the stamp image on the picture side, the text “Haunted Canada” and a semicircular “CANADA / POSTAGE PAID” imprint in English and in French.