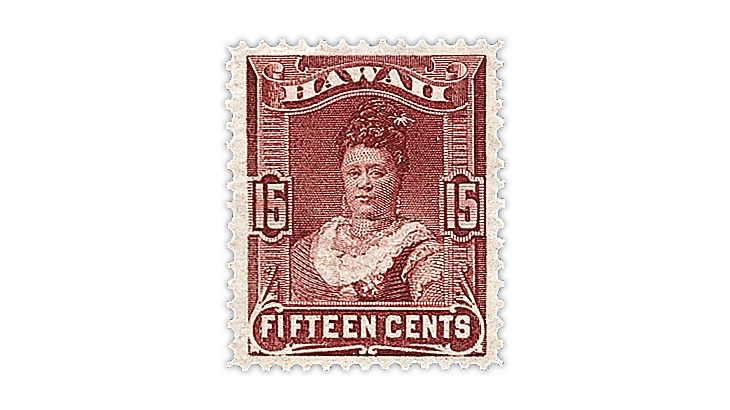 There are many reasons to like Hawaiian stamps. They are exotic, romantic, historical and classic. Sure, there are a lot of great rarities that are beyond the reach of almost all collectors. But there are also quite a few attractive and affordable engraved stamps that are within the budgets of most collectors.

In 1882, the Kingdom of Hawaii issued a 15¢ red brown Queen Kapiolani stamp (Scott 41). Kapiolani (1834-99) was the queen consort of King David Kalakaua. She was the granddaughter of the last king of Kauai before it was subsumed in the unified Kingdom of Hawaii under Kamehameha the Great.

She married Kalakaua in 1863 after the death of her first husband in 1860 and before Kalakaua would ascend the throne of Hawaii in 1874.

A devout Anglican, she sponsored a maternity hospital and a girls’ school for her people. She served as dowager queen after the death of her husband, the king, in 1890 until the monarchy was overthrown in 1894.

The Scott Specialized Catalogue of United States Stamps and Covers values the 15¢ Queen Kapiolani stamp at $70 in unused, original gum condition; $27.50 in used condition; and $150 in mint, never-hinged condition.

The stamp is a good buy in very fine grade at 80 percent to 90 percent of Scott catalog values.