Hillary Clinton is president on souvenir sheet for sale on eBay 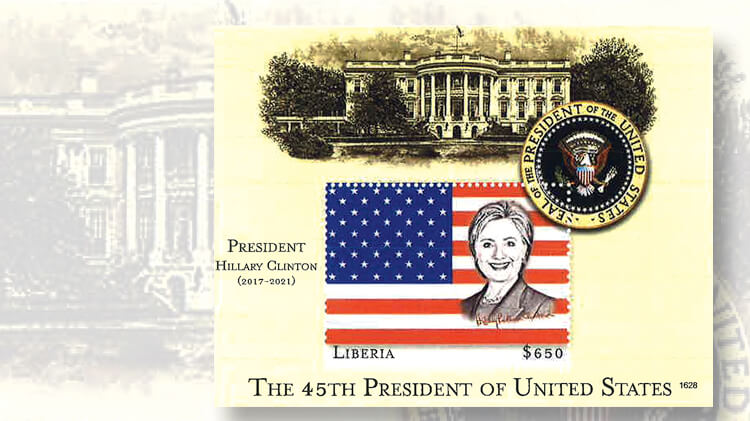 Liberia had prepared a souvenir sheet in advance of the 2016 presidential election featuring Hillary Clinton as the 45th president of the United States. A few of these sheets have surfaced. Liberia issued a similar sheet with a $450 stamp featuring Presid

A Liberian souvenir sheet  featuring Hillary Clinton as the 45th president of the United States is being offered for sale on eBay.

The availabity of this unissued souvenir sheet was announced in a press release from Anglo American Appraisal Services of New York City.

In the first paragraph of the press release, Anglo American Appraisal Services reported that the “Hillary Clinton Postage Stamp as the 45th President of the United States is to be withdrawn.”

Differences, of course, include a portrait of Clinton and a facsimile of her autograph on the stamp, and an inscription referring to her as the 45th president.

Whether Liberia prepared both versions of the sheet fefore the Nov. 8, 2016, United States presidential election is not known. However, that is what happened in the 2000 George W. Bush and Al Gore presidental election when some examples of the Al Gore as president sheets and stamps were inadvertenly placed on sale before being withdrawn.

At that time, Emma Wuor, minister of posts and telecommunications for Liberia, said that “since this race was so close, we decided to design and produce stamps of both men.”

In its press release, Anglo American Appraisal Services said of the Clinton sheet: “Having antcipated a victory by Hillary Clinton, the country wanted to be the first to commemorate this historic event, a woman elected as the 45th President of the United States, with a postage stamp to be issued on the day of her Inauguration.

“Unfortunately for the Post Office in Liberia, the election did not turn out as anticipated and Donald Trump was the winner. The stamps have been withdrawn. The few that have survived could be very much in demand as ‘Non-Issued’ stamps for collectors.”

The firm told Linn’s that it has 40 examples of the Clinton sheet, and said that it did not know if others existed.

A member of the American Stamp Dealers Association, Anglo American Appraisal Services describes itself on its website.

com, as “a New York City based company of Appraisers & Auctioneers, committed to finding the rare, the scarce and the unusual for our clients.”

A 2009 stamp series from Liberia shows all presidents of the United States from George Washington to Barack Obama (Scott 2567-2570). Both the Trump souvenir sheet and the unissued Clinton sheet appear to be part of that series.

Prior to the election, Liberia had issued stamps and souvenir sheets picturing both Trump and Clinton in a set called “Race to the White House” (Linn’s, Sept. 5, 2016, page 21). These stamps depict photographs of the two candidates.