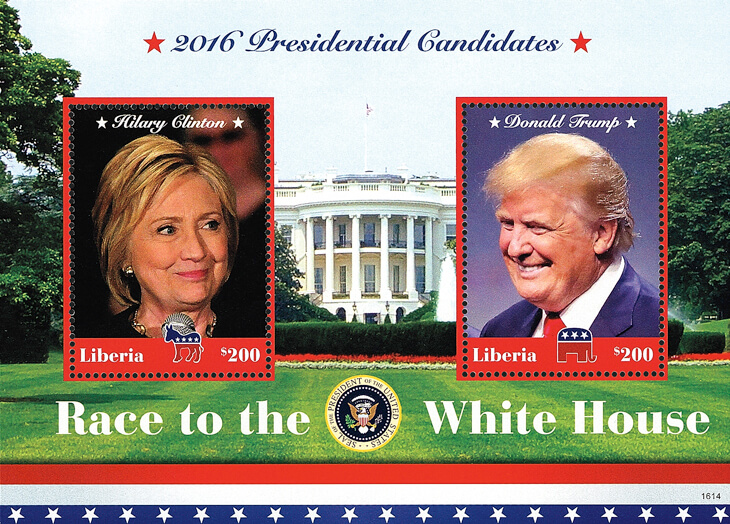 Called Race to the White House, these stamps and souvenir sheets feature photographs of the candidates, Hillary Clinton and Donald Trump, and their spouses.

Inter-Governmental Philatelic Corp., the new-issue agency for Liberia, reports that the issue date was July 19.

Five of the stamps are denominated $20.16, obviously in reference to 2016 as the election year. Liberian $20.16 is equal to about 22¢ in United States currency.

The $20.16 stamps are in three large sheets of 20 stamps. Each sheet includes two blocks of 10 with two different designs and a photograph of the White House in the background. Printed at the bottom of each sheet is “Race to the White House.” The great seal of the United States is shown between the words “the” and “White.”

In addition, the Clinton sheet includes the donkey emblem of the Democratic Party, and the Trump sheet has the elephant emblem of the Republican Party.

A third sheet includes 10 stamps picturing Clinton and another 10 for Trump, with the donkey and “The Democratic Party” above the Clinton stamps on the left side of the pane and “The Republic Party” and the elephant above the Trump stamps on the right.

The White House is shown in the background of this and the other two souvenir sheets in the set.

These sheets feature the candidates and their spouses. One sheet contains two $200 stamps showing Hillary and Bill Clinton in one design and Hillary by herself in the other, and the other pictures Donald and Melania Trump on one stamp and Donald by himself on the other.

Liberia is not alone in issuing stamps for the U.S. presidential election.

One sheet contains a single stamp showing President Barack Obama. The two candidates are pictured in the border.

The other sheet has four stamps: Clinton and Trump on the top stamp, two images of Trump on the first stamp in the second row; the Statue of Liberty in the center stamp; and Bill and Hillary Clinton on the final stamp.

Stamperija is the new-issue agent for the Maldive Islands.

The website of IGPC can be found online here.