History of Radio in Canada stamps available May 20 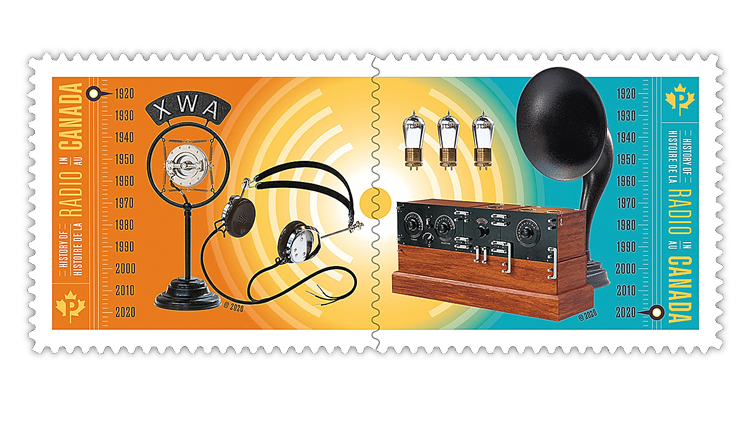 On May 20, Canada Post is issuing a se-tenant (side-by-side) pair of nondenominated permanent-rate (currently 92¢) History of Radio in Canada stamps. The new issue comes in a self-adhesive booklet of 10.

The stamps commemorate Canada’s inaugural radio broadcast, which hit the airwaves a century ago on the evening of May 20, 1920. According to Canada Post’s Details magazine for collectors, the radio program came from Marconi Wireless Telegraph Company’s studios in Montreal, Quebec, and was a closed broadcast for a Royal Society of Canada gathering at the Chateau Laurier hotel in Ottawa, Ontario.

The show featured a live performance by soprano Dorothy Lutton.

“As reported in the Ottawa Journal by one of the journalists invited to listen in, when ‘the latest one-step’ was played, the clarity was so impressive that several of the newspaper writers began to dance,” the May Details magazine said.

The stamp designs list the 10 decades of radio from 1920 to 2020 on the outside edges. The stamp on the left shows headphones and a vintage radio microphone topped with the acronym “XWA,” which stands for Experimental Wireless Apparatus and is the call letters for the first commercial broadcast radio station in Canada.

The stamp on the right depicts a horn-shaped speaker, three bulbs, and a retro radio box with dials. Circular sound waves in the middle of the pair bring the two stamps together.

“To create a stamp depicting the earliest days of radio, for which there was little original imagery available, Canada Post assembled a team of experts from academia, communications museums and vintage radio clubs to ensure visual accuracy and an authentic back story,” Details magazine explained.

Soapbox Design created the History of Radio in Canada stamps with illustrations by Oliver Burston.

Lowe-Martin printed the stamps by four-color lithography. A total of 130,000 booklets were printed. The stamps measure 34 millimeters by 29mm.