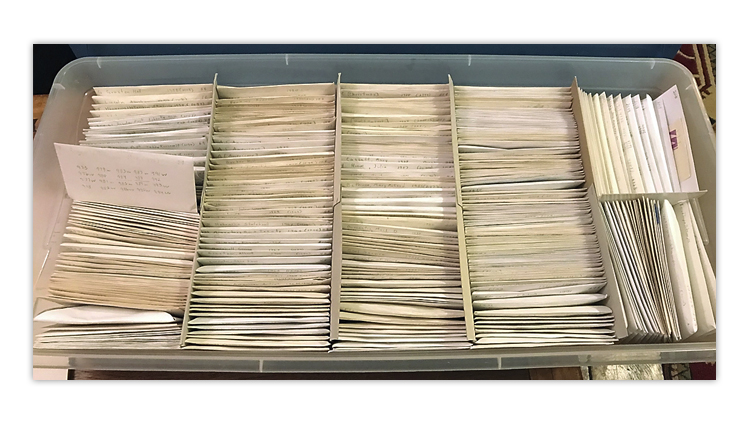 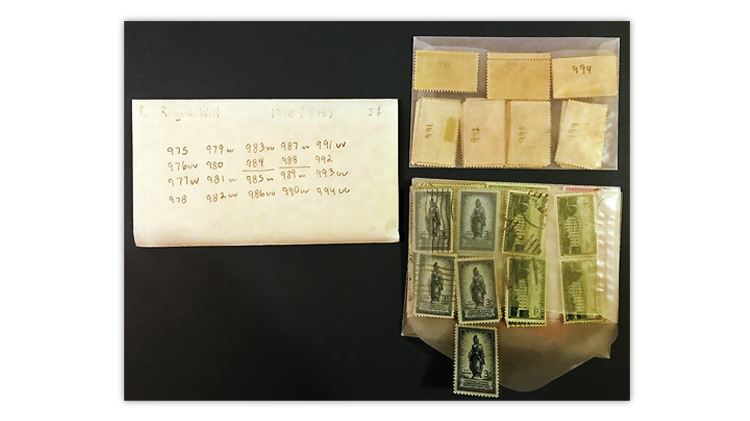 Cook places several glassines inside a paper envelope with stamp catalog numbers written on the outside. Photos courtesy of Bill Cook.
Previous
Next

“It is a common situation that many stamp collectors face: How do you deal with duplicate examples of stamps or covers in your collection?” was how I started the Philatelic Foreword column in the weekly Feb. 4 issue of Linn’s.

Little did I anticipate the overwhelming response that soon arrived in the form of emails and letters. Needless to say I consider this to be quite the relevant discussion.

Reader Bob Brown wrote to share that he has lots of duplicates: “I feel your pain. A club I belong to asked for stamps for kids. I sent them 600. It was at that point I realized how many thousands of duplicates I really have as it did not even make a dent. If you have any ideas that would be great.”

I will share a few ideas. I have sorted suggestions into four categories: donate, trade, sell, and save. I also will provide a few thoughts on organization and other intriguing ideas.

Donating duplicates is probably one of the simplest ways of parting with excess stamps, but this landscape is slightly changing with an opportunity now presenting itself for local stamp clubs to get material.

One reader, Jim Benford, asked if something changed recently at the American Philatelic Society regarding donations. Scott English, APS executive director, provided the following reply to a Linn’s inquiry:

“We’ve suspended receiving donations of common stamps, stamps on paper, and first day covers so that we can focus more on getting stamps into the hands of collectors rather than processing and storage management. We still accept donations for the reference collection.

“Over the past few months, we’ve been referring potential donors to local stamp clubs, and the feedback has been generally positive from the clubs and the donors.

“What’s difficult is to continue taking on thousands of donations each year without having meaningful outlets to share the stamps. Just in stamps on paper, we have millions of clipped, cancelled stamps and hundreds of thousands of first day covers. We would welcome anyone who needs stamps to support education programs or club activities to contact us.” The APS has a contact page on its website www.stamps.org.

Other reader-suggested venues include Veterans Affairs hospitals, Stamps For The Wounded, Boys Town in Nebraska, local charities such as the Washington state Recycle Stamps for Cancer Research program, or simply donating stamps to young collectors.

Reader W.H. Robbins saves philatelic items and waits for a letter to Linn’s asking for stamps by a veterans group or school. “I enjoy encouraging those of the younger generations to take an interest in our hobby,” he wrote.

Jack Andre Denys wrote to share the following: “I save my duplicates, sort them into topical categories, and donate them to the American Topical Association (ATA). Then volunteers put 30 of them into Taste of Topicals starter packets for sale at low prices to youth and beginning topical collectors. Everyone wins — collectors get stamps, the ATA makes some money — and I no longer have duplicates!”

Lastly, another reader who sells stamps online makes a small packet of less valuable stamps as a giveaway as an unexpected bonus to the order.

One is the International Society of Worldwide Stamp Collectors (ISWSC). Reader Tom Wasniewski is manager of one of the groups on the site. He shared that no cash is involved. "We trade by catalog value only. Last year our little group of about 40 collectors exchanged over $18,000 in catalog value of material.”

A helpful tip from one online stamp trader suggests assembling duplicates on a stock sheet, scanning the sheet and sending the image to friends to encourage them to select the stamps they would like to add to their collections.

Stamp clubs are a good place to share some of your duplicates. Reader Gerald Chaben said he puts a lot of cheaper catalog duplicates in a bin and charges 5¢ a piece for them. He said the lots are popular among stamp club members.

Stamp club auctions are also a good place to move duplicates. Depending on the quality of material you have, you can sell duplicates through an auction house at public auction.

Reader James C. Dumville said the internet proved to be a useful venue to sell his more expensive stamps, and it changed the way he dealt with duplicates.

One reader purchases albums of stamps online, removes what he needs to fill blank spots in his album and then sells the album online again.

Another reader shared that stamp supplies and literature are probably best offered for sale in a stamp club auction.

One suggestion just made me smile, so it gets its own subhead. W. Obenland’s suggested “Some duplicates are just plain fun to keep in your collection. I love the Scott C1 Jenny airmail stamp. It is one of my favorites.

“This past year I was able to win at auction a block of 14 of them. I call the block my ‘squadron of Jennys.’”

Collector Merrill Culver Jr. wrote, “With blank [album] pages to supplement preprinted pages, I can attend to the addiction of stamps with selvage, mint/used copies, multiples, extras ... Ultimately, they could end up being donated, but for now saving is the plan.”

Bill Cook sent an email with two images that are shown on page 4. “I keep my duplicates in storage containers, arranged by Scott Catalog number,” he wrote.

Greg Wilmoth suggested for storage that “... it depends on the duplicate. Mint never-hinged duplicates go into 102 dealer cards with catalog numbers.

“Used duplicates go into previously used glassines or into boxes depending on the value of the stamps.

Wilmoth also noted the resulting 102 cards, glassines, and Vario sheets are not organized by country, which makes it hard to find what someone might want to trade for.

Eddie Wise suggested stock pages for duplicate storage. “I have put a stock page in my albums as the last page of every country for any duplicates.”

He continued, “If I fill up a stock page, it is easy to just put in another page. This procedure also keeps my duplicates divided by country instead of being all in a big pile."

Michael Kernaghan sorts his collection into stock book pages by country and by date of issue.

He stated, “Then I can select from them to create sets or packages that can be offered in an auction sale. I try to imitate the kinds of selection and packaging that sell at the auction.”

“I love to do research and write up presentations to give at my stamp club meetings,” Huff said.

“I will pull any duplicates that relate to the topic and attach them to the presentation, which are then passed around for members to look at.”

I am certain there have been a few suggestions overlooked, but I truly hope that this article will get the juices flowing on what to do with your duplicates.

How to collect it feature completed for 2018 U.S. stamp program