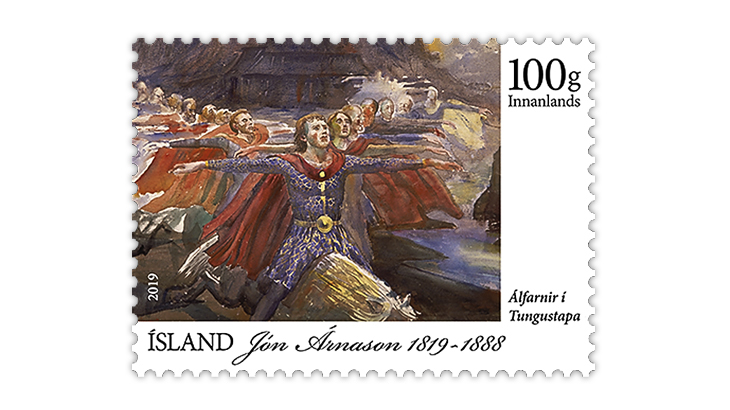 One of the five stamps to be issued Sept. 12 by Iceland Post commemorates the 200th birth anniversary of Jon Arnason, an Icelandic scholar who collected orally transmitted folk tales and legends.

Iceland Post will close its stamp and philatelic department, Postphil, at the end of this year as a cost-cutting measure, and also may stop issuing postage stamps in 2021.

The news of Postphil's closure came in an Aug. 20 email letter from Vilhajalmur Sigurdsson, head of philately for Iceland Post. In that letter, Sigurdsson mentioned three possibilities about the future of Iceland as a stamp-issuing nation: It may stop issuing stamps, it may issue very few new stamps each year, or it may give the responsibility for producing stamps to a private contractor.

Linn's Stamp News contacted Iceland Post for further information, and Brynjar Smari Runarsson, head of marketing, replied: “We will continue to release new stamps next year and a few in 2021. These are releases that were already lined up. After that, Iceland Post will stop publishing new stamps. However, we have a stock of stamps that will last us many years without having to print new ones.”

As for Postphil, Sigurdsson said that after Iceland's remaining stamps for this year are issued “the department will be closed down for good and will stop serving stamp collectors, domestic and foreign, altogether.” Among the remaining new issues are five stamps on Sept. 12, including a souvenir sheet of two for Icelandic Nature Day; and six stamps on Oct. 31.

Employee layoffs are another of Iceland Post’s recent cost-cutting measures. According to an Aug. 20 press release on Iceland Post’s website, the number of full-time positions will be reduced by 80 this year.