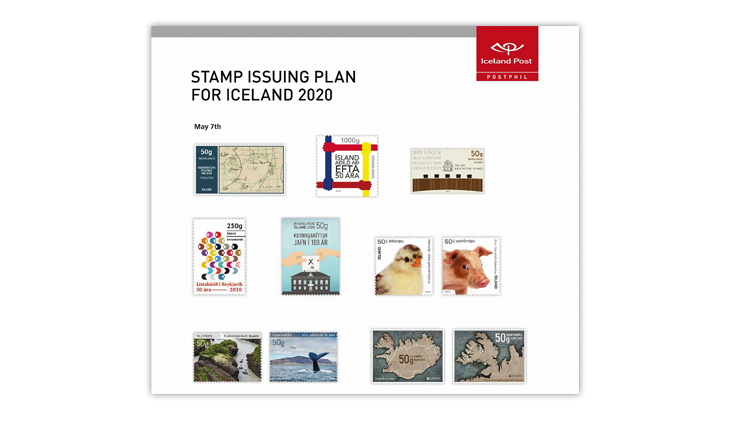 Iceland Post announced its 2020 stamp program, consisting of 23 different stamps, on Jan. 23. The stamps will be issued on two dates, May 7 and Oct. 29. In September 2019 Iceland Post revealed it may end its stamp program in 2021.

In September 2019 Iceland Post announced that it will close its stamp and philatelic department, Postphil, at the end of the year and indicated a potential end to its stamp program in 2021.

Linn’s reached out to the Postphil team for an update but did not receive a reply at press time.

Judging by its website, it seems the closure of the country’s philatelic department did not take place at the end of 2019 and its website is still taking orders.

Another glimmer of hope is that a Jan. 23 press release announced 15 new stamp subjects for 2020, consisting of 23 stamps to be issued on two dates, May 7 and Oct. 29.

In recent years Iceland typically has issued stamps on four to five occasions throughout the year, so a consolidation on that front took place.

Postphil does caution that the stamp-issuing plan is subject to change.

The Linn’s article in the Sept. 9, 2019, issue included a quote from an Iceland Post marketing official that stated that stamps would be issued in 2020 and “a few in 2021.”

I hope that in 2020 Iceland Post will consider a strategy for continuing its stamp program. If any new information is revealed, Linn’s will provide an update.

The Iceland stamp issues scheduled for May 7 comprise 11 stamps across eight subjects. These include the centenary of the Icelandic Meteorological office that was founded Jan. 1, 1920; 50 years of membership in the European Free Trade Association (EFTA); the centenary of Iceland’s supreme court; 50 years of the Reykjavik Arts Festival; 100 years of equal voting rights for all Icelandic citizens; two stamps showing a chick and a piglet as the fourth part of a young domestic animals series; two Tourist stamps showing white water rafting and whale watching; and two Europa stamps for ancient postal routes.

The 12 stamps scheduled for Oct. 29 represent seven subjects. These include two Icelandic garden vegetables stamps showing a carrot and a beet; a Norden stamp with mammals as the theme that pictures a mink; a Sepac stamp showing artwork from the National Gallery of Iceland by Jon Stefansson; 250 years of the Icelandic land commission; a souvenir sheet of two marking 800 years since the start of the Age of the Sturlungs in 1220; three stamps showing medals of the Order of the Falcon for its centenary; and two Christmas stamps showing a ptarmigan and fox in winter camouflage.