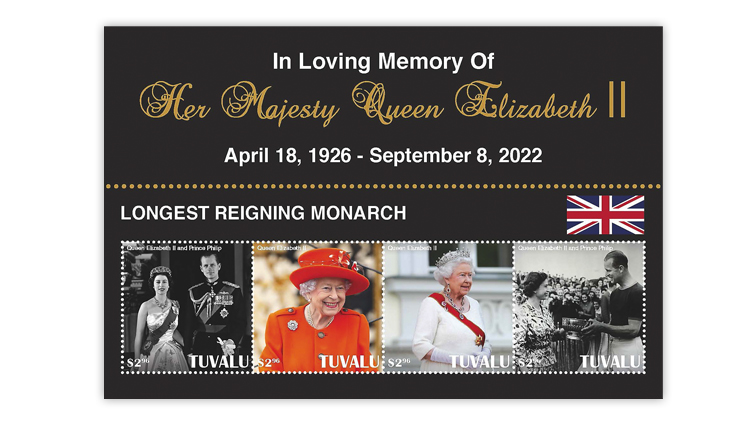 Inter-Governmental Philatelic Corporation has corrected the erroneous April 18, 1926, birth date on this Tuvalu souvenir sheet of four that will be issued in memory of Queen Elizabeth II. IGPC caught the mistake before the sheet went to press.

New-issue agent Inter-Governmental Philatelic Corporation has corrected an errant birth date that appears on its preliminary artwork for a Tuvalu four-stamp souvenir sheet to be issued in memory of Queen Elizabeth II, who died Sept. 8 at Balmoral Castle in Scotland.

The sheet, which incorrectly shows the queen’s birthday as April 18, 1926, instead of the correct April 21, 1926, was illustrated in the Oct. 3 issue Linn’s Stamp News.

George Painter of Ohio alerted Linn’s to the discrepancy via email on Sept. 22, shortly after the story was published.

“I went to the Art Department and wanted to scream,” Malamud told Linn’s via email.

“Before I had a chance to finish saying the words Queen, Tuvalu, they shut me down and said that they caught it last week already and corrected it before it went to print,” Malamud said.

Malamud said that this mistake “shows how important Linn’s is to the world of philately and that collectors are as real as they come.”

“They know their facts, dates and world history better than anyone else,” he said.

IGPC announced on Sept. 8 that 10 nations it represents will issue memorial stamps for Queen Elizabeth II.

The participating countries are Antigua and Barbuda, The Gambia, Grenada, Guyana, Marshall Islands, Nevis, Papua New Guinea, St. Kitts, St. Vincent and the Grenadines, and Tuvalu. More countries are expected to participate, according to IGPC.

IGPC said these new stamps will be available from post offices in the issuing countries, from stamp dealers and through its website.