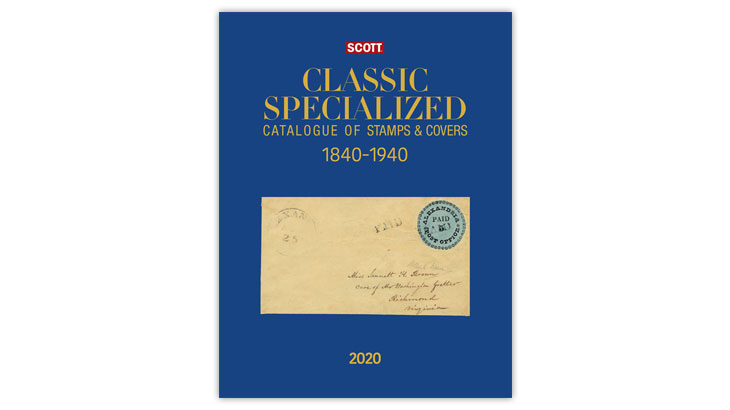 The 2020 Scott Classic Specialized Catalogue of Stamps and Covers 1840-1940 includes many editorial enhancements and value changes.

The 2020 Scott Classic Specialized Catalogue of Stamps and Covers 1840-1940, widely recognized as the best single-volume catalog for classic-era stamps of the world, celebrates its 26th edition this year.

We recognize the tireless efforts of Scott editor-at-large Donna Houseman, who serves as the lead editor of the Scott Classic Specialized catalog. Houseman was assisted by William A. Jones, a former Scott associate editor; and Scott managing editor Timothy A. Hodge. Together, this team provided numerous updated values and significant editorial enhancements throughout the 2020 Scott Classic Specialized catalog.

What sets the Scott Classic Specialized catalog apart from the Scott Standard catalog are the thousands of never-hinged listings, on-cover listings, varieties, pre-stamp postal markings and forerunner listings, among other features.

A Special Feature article by Linn’s Stamp News editor Michael Baadke announces that the Alexandria Blue Boy postmaster’s provisional cover is now valued in the Scott catalog. Baadke explains that the cover sold at auction in June 2019 for $1,180,000, and this value replaces the dash in the catalog listing for Scott 1X2.

From 1925 through 1943, Venezuela’s perforated Official stamps consisted of regular and airmail stamps punched with the initials “GN” (Gobierno Nacional). As the note on page 1307 of the new edition states, “The perforated initials can appear either upright, inverted, or sideways, reading up or down on any given stamp and can be right-reading or left-reading, creating eight possible varieties.”

Another editorial enhancement is found among the back-of-the-book listings for Switzerland. The listings for postage due stamps Scott J4-J34 have been expanded and reorganized by type and frame orientation (normal upright frame and inverted frame). This reorganization resulted in 196 new listings.

The second Special Feature article in the 2020 Scott Classic Specialized catalog describes the type and frame varieties of Swiss postage dues and how they came about. Collector and Switzerland specialist Richard T. Hall wrote the feature to help collectors determine whether their stamps are type I or type II and whether the frames are normal or inverted.

New listings were added in Austrian offices abroad for stamps of the Danube Steam Navigation Co. The Danube Steam Navigation Co. was formed in 1829 and began operations in 1830, subsequently servicing the Austrian public, military and consular post offices along the Danube in the area of the Ottoman Empire. In 1846 the company became the official carrier for the Austrian post offfice, while continuing its private mail service. In 1866, on the authority of the Austrian post office, the company began the use of its own adhesive stamps.

As the states along the Danube broke free from Ottoman rule and began to establish their own, more reliable postal services, the company suspended its mail service to Moldavia-Wallachia in 1873 and to Serbia, Bulgaria, Dobrudja and Odessa (Russia) in 1879.

In 1892 Thailand began surcharging high-denomination stamps with low denominations. The “att” overprints and the Siamese overprint preceding them are listed as Scott 19-69. Numerous footnotes and images have been added to the 2020 Scott Classic Specialized catalog to aid the collector in identifying these notoriously challenging issues. Enlarged images and a note detailing the two types of Siamese surcharges have been added.

Measurements of the size of the surcharge and the distance between the English and Siamese parts of the surcharge in each setting are included in the footnotes to help differentiate the surcharges from each other and to mention collectible varieties. The 4a-on-12a stamp in small Roman type was added as Scott 50d. Several font varieties of Scott 40 also were added.

Overall value changes in this year’s catalog reflect a mix of increases and decreases. This is true of the more than 700 value changes that appear in Austrian offices for Lombardy-Venetia.

The more than 100 value changes for Heligoland issues also resulted in a mix of increases and decreases.

A complete examination of the classic issues of Eritrea resulted in almost 450 value changes. More than 200 value changes in the Italian states of Modena and Parma show a continuing softening of the market for these areas.

The forerunners of Aden (stamps of India used in Aden) received a thorough review, resulting in many increases in values. New never-hinged values and on-cover listings have also been added to Saudi Arabia.

Collectors of China will want to take note of the multitude of minor varieties added for 1931-32 wet and dry printings.

A thorough review of Western Ukraine resulted in approximately 250 value changes, reflecting a strengthening of the values for stamps of this area. Editorial notes were updated, and new varieties were added.